That time when drains were a Toronto cyclist's nemesis

On a sticky and overcast June 30, 1983, University of Toronto student Margaret Lawson was cycling north on Yonge to her summer job at the Ministry of Revenue. She remembers approaching a parking meter, then nothing. When Lawson regained consciousness a few minutes later she recalls a pain in her chest and no feeling in her legs. As the Globe and Mail reported, "she knew she was paralyzed."

Lawson was never sure whether she was sideswiped by a car or if her tires fell through one of Metro Toronto's notorious sewer grates, but after just three months in Sunnybrook Medical Centre, the irrepressible physiology major was back at St. Hilda's College with the help of a wheelchair. The city, however, wasn't about to accept blame for its dangerous drains. 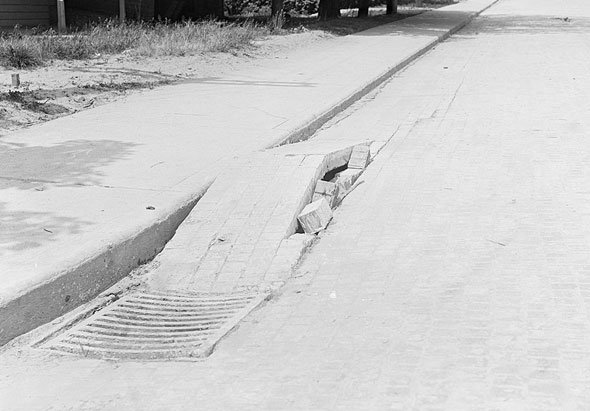 Then, as now, cycling in Toronto had its unnecessary dangers. In a letter to the Toronto Star in 1980, a reader cited the drain covers, uneven curbs, parked cars, and swerving drivers unaccustomed to passing slow, narrow vehicles among the top biking hazards.

The drains in question had long, thin holes parallel to the curb that were ideally sized and spaced to snag narrow bicycle tires. In the early 1980s there were more than 22,000 of the grates in Toronto, more than 1,500 of them on major cycling routes like Yonge.

The obvious solution was to simply rotate the problem drains or install replacement metalwork with the herringbone pattern used on the current gratings, and by 1984 more than 9,500 bike-friendly replacements had been dropped in place. From there, the city proceeded at snail's pace, installing roughly 50 new covers each year. If it hadn't sped up, it would have taken more than a decade to finish. 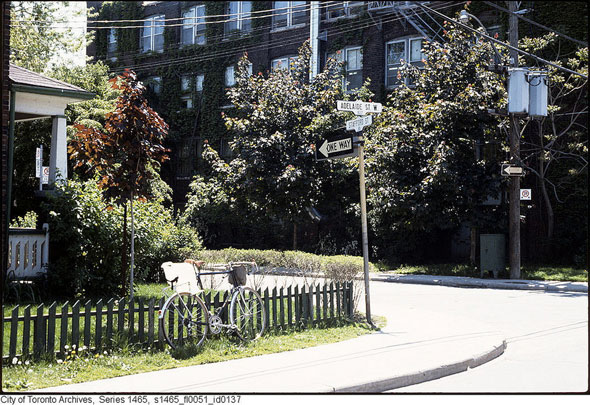 In the meantime, cyclists demanded the city mark its remaining tire-hungry drain covers with a special decals, something that would have cost around $13,000 in 1984 - about $25,600 in today's money, but the city balked.

Labeling drain covers that were a danger to cyclists would, they said, be an admission that the streets were hazardous to users and could have exposed it to lawsuits in the event of a crash.

An editorial in the 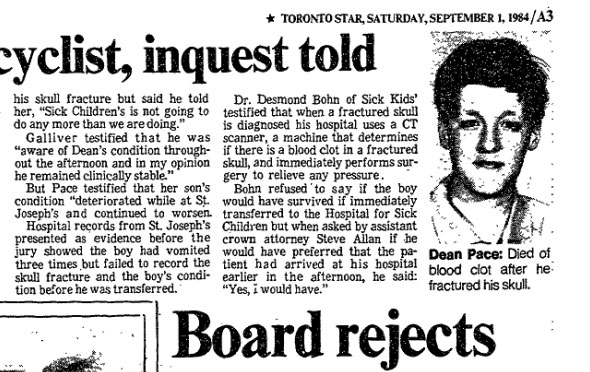 Toronto Star pointed out that a single spinal injury would likely cost the province considerably more than the $13,000 the city was trying to save in road paint.Then in 1984, just over year after Margaret Lawson's accident, 11-year-old Dean Pace was killed when he fell off his five-speed bicycle on Sorauren Ave., fatally fracturing his skull. From damage to Pace's wheel rims and scratches on an old-style grate, police believed the boy had been flipped after his tired had fallen down a gap.

Though an inquest would later cast doubt on that scenario, the tragedy spooked the city enough to cough up the money to mark the remaining covers with yellow warning stripes.

"It is a sorry situation when city council seems only willing to act when tragedy strikes," said councillor Jack Layton, then head of the cycling committee. Fellow councillor and cyclist Richard Gilbert floated the idea of (groan) licensing cyclists to cover the steep cost of the upgrades - $8 million in 1984, $15.8 million today. 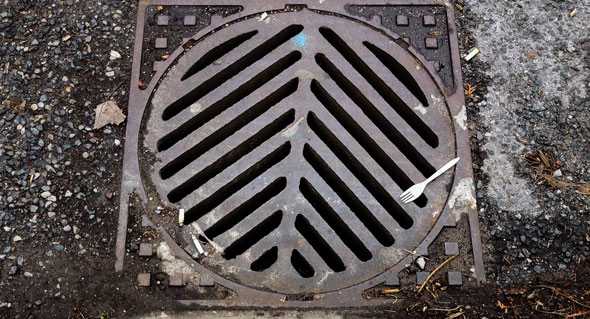 In 1986, in a report published in its Watchdog magazine, Toronto Public Health found many inexperienced riders rode as close as possible to the curb to avoid brushes with passing cars. Of the 504 people who fell off their bike in Ottawa in 1983, only half were involved a collision with another other vehicle.

Toronto's catch basins were eventually rectified and now the majority of storm drains use the safer angled slot pattern. Streetcar tracks, especially at busy intersections, are now the biggest concern for narrow-tired cyclists. Should the city do more to ensure roads are safe in the absence of dedicated bike lanes?