For all its differences, the Toronto of 1931 had a very relatable problem: traffic. Parked cars on major crosstown routes blocked streetcars and forced moving vehicles to share a lane with public transit. At the time, cars park on King, Richmond, Yonge, and other major routes without fear of a ticket.

New mayor William Stewart, who had arrived in office earlier in the year, changed all that by pushing a new parking by-law through council, banning or restricting parking on key routes through the city. During rush hour, curbside waiting was halted entirely in an attempt to keep streetcars and private autos moving. Speaking on April 27, 1931, days before the rules came into effect, Steward declared:

"The parking situation is particularly unsatisfactory. Too many of us have come to regard street parking, not as a privilege, which it is, but rather as a statutory right, which, decidedly, it is not." 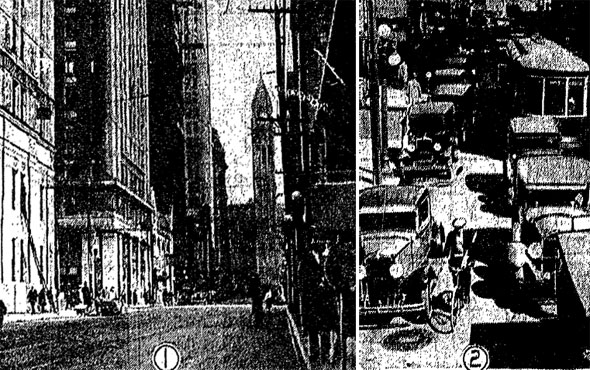 In the days after the ban, as photographs attest, the weight of traffic on the most congested routes access roads to the downtown core was dramatically reduced. In a radio address, mayor Steward said the by-law would "assist our people to operate their vehicles in their own interests, in the interests of their fellow citizens, and for the good of the city."

Though it clearly was effective at unclogging Toronto's busiest streets, shopkeepers and business owners cried foul, claiming the city had inadvertently stymied trading. Pedestrians were not immune from regulation; traffic officers handed tickets to "jaywalkers" who crossed mid-block. Despite some confusion on May 1, the first day of the new rules, the Toronto Star "successful, even beyond the hopes of those concerned."

Interestingly, private parking lot owners who fiendishly inflated their prices in anticipation of a spike in demand found many drivers simply left their cars at home and hopped on the streetcar.

Many of these rules are still in effect on parts of King and Yonge, but is it time the city did something about the parking situation on Queen and other roads? Could restricting parking there improve streetcar service in peak periods or would that have a negative effect on local business?