Toronto has something of a mixed relationship with Canada's national weather phenomenon. We love sledding in Riverdale and Christie Pits parks but tend to fret when too much of the white stuff builds up on the doorstep. This week's dump of snow, despite some ugly moments on the roads, generally went off without much disruption. Here we have some of the snow stats and a look at what the TTC did to mitigate potential chaos.

Away from the snow, the TTC has been quietly maintaining a fleet of vintage turnstiles on the Yonge and Bloor-Danforth lines. The locally-built Canadian Beaver Co. fare collection equipment has withstood decades of saline slush, summer heat, and barging commuters and continues to unfailingly gobble up tokens to this day. Spot one next time you're riding. 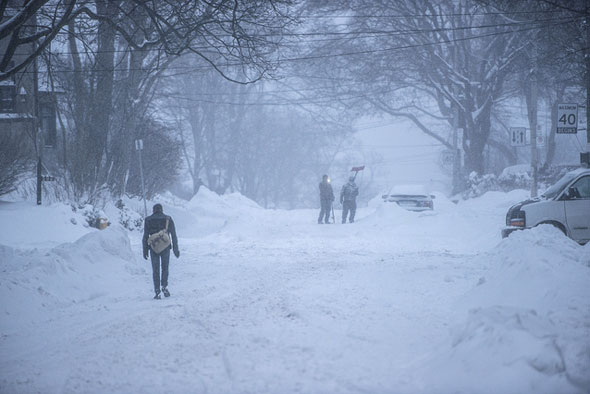 Now that the dust (snow) has settled on this weekend's bumper storm it makes sense to package up the wild weather in to a series of numbers for posterity. Though it wasn't the biggest snowfall ever to hit Toronto - these vintage pictures show what it looks like when it really snows - it still managed to disrupt plenty travel and work plans. Here is the Snownami, Oblizzerator, Snowpocalypse, whatever, in numbers:

KEEPING TRANSIT RUNNING IN A BLIZZARD 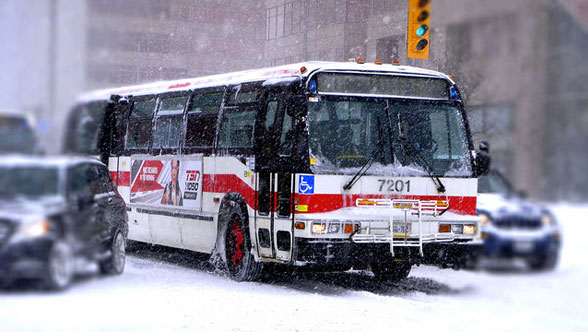 How do you keep transit running when all other transportation methods become a treacherous mess? Though it wasn't a faultless few days for the TTC, subway, streetcar and bus services generally stayed on track. Here are some of the measures the Toronto Transit Commission adopted to ensure the system wasn't (totally) caught out:

STORING TRAINS IN TUNNELS: Instead of leaving subway cars in the elements, the TTC stored more than 50% of its rolling stock in underground portions of the network while the majority of the snow fell.

DE-ICING TRAINS In open-cut sections of track, the third rail, the electrified strip that powers the train, tends to freeze up in a blizzard. To combat this, a special train with ethylene gycol (de-icer) dispenser circulated throughout the storm (though it might not have entirely done the trick.)

SPECIAL "STORM" CARS: Idle switches and moving sections of track on the streetcar network tend to get stuck if they're not regularly exercised. To that end, special cars tour every switch, loop, and section of track throughout the storm.

SEND IN THE TROOPS!

It wouldn't be a snow post without a look back at the time the leader of a major Canadian city had to call the army to do the shoveling. And by that I mean Victoria, BC. They did it too! If you're interested in re-living Toronto's balking in the face of the white stuff, here's a blogTO picture post.

"WHAT'S THAT THING" - AN URBAN EXPOSITION 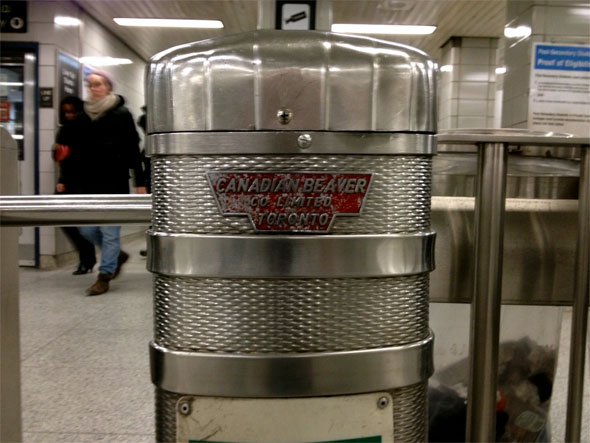 It's easy to ignore subway turnstiles, after all they're merely an obstacle one must pass through in order to get some place else, but riders of the Yonge and Bloor-Danforth lines should (in my opinion anyway) keep their eyes out and play "Spot the Beaver" on their next trip.

The Canadian Beaver Co. turnstiles are the original barriers installed when both subway lines were still under construction. According to the TTC's Brad Ross, there are two models: the 1954 version on the Yonge line and a later set from 1966 on the Bloor-Danforth. He says "high quality, simplicity of design and mechanics, and good maintenance practices by the TTC over the years" have kept the machines running without fault in some cases almost 60 years.

Though Ross couldn't be certain exactly where the Beavers reside (the one photographed above is part of a cluster at Sherbourne station,) they're definitely still out there. Look for the red manufacturer's plate and textured metal sides next time you ride.