Toronto's sewer system quietly does the dirty work of transferring raw sewage from the toilet to the nearest waste treatment plant, usually out of sight and mind. The news a few years back that a major poop highway beneath Coxwell Avenue was damaged - and possibly only a few turds from sending a torrent of effluent into the Don River - meant the city had to act fast to avert disaster.

A purpose built bypass of the damaged section was built using a tunnel boring machine, much like subway tunnel, and completed just a few days ago. The vital stats of the operation are listed below.

In addition, there's a grim reminder of the days when small pox was rife, a look at Toronto's graffiti laws, and an explanation of those little number plates that are all over the TTC's subway.

A you-know-what storm has, quite literally, been brewing under Coxwell Ave. for several years. In 2008, a video inspection of a major sewer pipe - one that carries three times as much "liquid" than the Don in dry season, almost a third of the city's waste - was found to contain substantial cracks, examples of fatigue that could lead to ecological disaster were it ever to fail.

To avoid a huge spill, the city began building a bypass sewer around the damaged section in 2010. The mainline tunnel serves 700,000 East York homes, so it wasn't possible to simply close the pipe for maintenance.

As of Friday, the gigantic bypass tunnel, dug using a tunnel boring machine, is fully operational. Here are some facts about the big pipes involved: 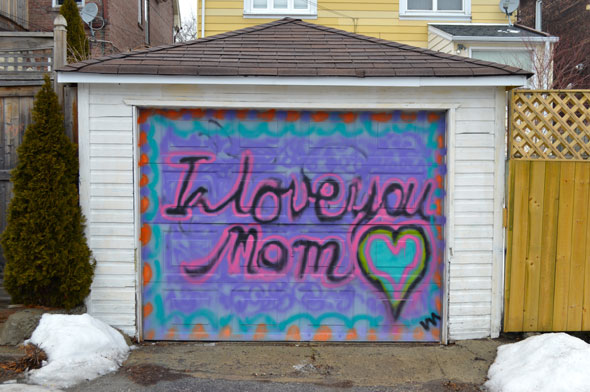 Coun. Mary-Margaret McMahon fell foul of the city's graffiti laws this week when bylaw officers from the licensing and standards division cited the Beaches-East York representative for a mural on the back fence of her family home. The five year old aquatic themed paint job, created by a local artist and McMahon's children, fell under the city's broad definition of "vandalism."

The city has two definitions of painted art in places that are visible to the public: "graffiti art" and "graffiti vandalism." Graffiti art is, officially, "markings made or affixed to properties that are approved by the property owner or occupant, where the markings aesthetically enhance the surface they cover and the general surroundings, having regard to the community character and standards."

Vandalism, on the other hand, is "any deliberate markings made or affixed on property that is not currently exempted or regularized by the Graffiti Panel, Executive Director or Council and: was made or affixed without permission of the owner; is considered to be a tag; for which there are reasonable grounds to believe that it may incite hatred or violence against any person or identifiable group; or contains profane vulgar or offensive language."

If you want it there, and it's not hurting anyone, it should be OK. If it's offensive or incites hatred or violence, it's gone. It's difficult to understand, then, why licensing and standards took action over the mural, which contains a "giant fish, small fish, a whale, and a bug-eyed crab and lobster." Coun. McMahon says her family will appeal the notice to the Graffiti Panel.

SMALL POX AND OTHER NASTIES 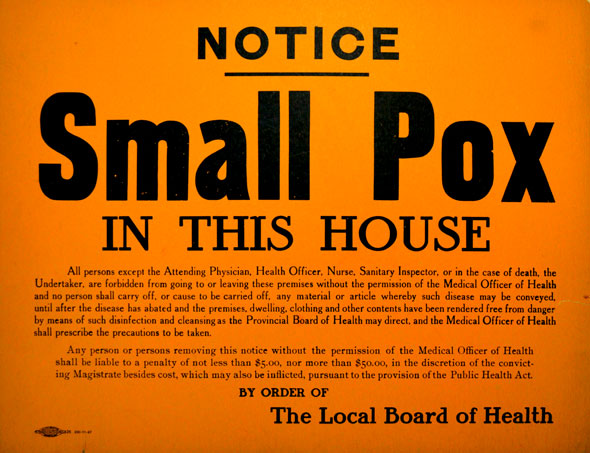 It might have officially been eradicated since the late 1970s, but I made sure to scrub my hands with extra soap after handling these placards at the City of Toronto Archives.

Small pox was (and I'm pleased to use past tense) a seriously nasty disease characterized by rashes, skin lesions, and in almost half of all cases, a grim death.

Like practically every large community in the early to mid 1900s, Toronto was a veritable hive of communicable nasties and local government's only way of containing the sickness in the absence of a vaccine was to single out infected homes with these signs.

The Isolation Hospital, once located in what is now Riverdale Park, was Toronto's favorite place to lock and isolate its sick and homeless. Read more about the hospital here.

"WHAT'S THAT THING?" - AN URBAN EXPOSITION 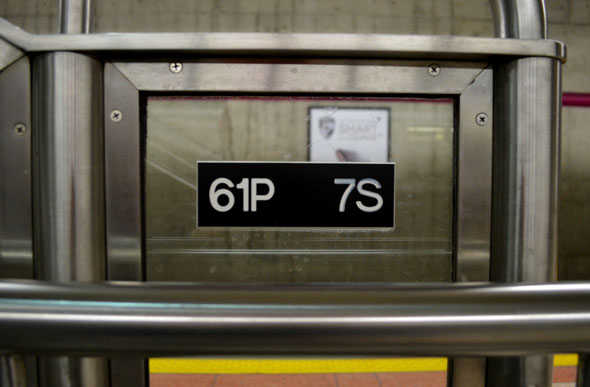 Frequent (and observant) subway riders might have noticed almost all of the TTC's underground assets - doors, stairways, ticket booths, etc. - carry a small plastic identification code. These number plates are used by the Commission to identify each piece of its complex system at a moment's notice.

The TTC isn't the only transit agency to use this system; London Underground also labels all of its property like a paranoid math student fearful of dispersing his geometry set. Trains on the TTC also carry a unique number; streetcar number 4000, for example, is the oldest of the current fleet still in operation - all other cars a numbered upward from 4000.