NIMBYism and ward surveillance just got that much more convenient. A new program launched by Toronto Public Space Initiative allows users to sign up for email alerts from city hall based on specific keyword selections.

TABS on Toronto, as the beta version is being called, is sort of like Google Alerts for Toronto City Council, except that instead of scouring the entire Internet, the program tracks city hall agenda items and background documents. And instead of tracking your own name and, perhaps, that of an estranged lover, you'll opt for alerts for street names, city councillors, project titles, and neighbourhoods. Essentially â anything Toronto-related for which you'll to be kept in the loop. So possibly, your own name.

Toronto Public Space Initiative touts TABS on Toronto as a way for stakeholders to keep up to date on important issues and facilitate better interaction with City Hall. Pending additional funding, TABS on Toronto hopes to expand its features to include text message alerts, bill and policy tracking, integration with city board, agency, and commission documents (I.e. Toronto District School Board), and additional research features. 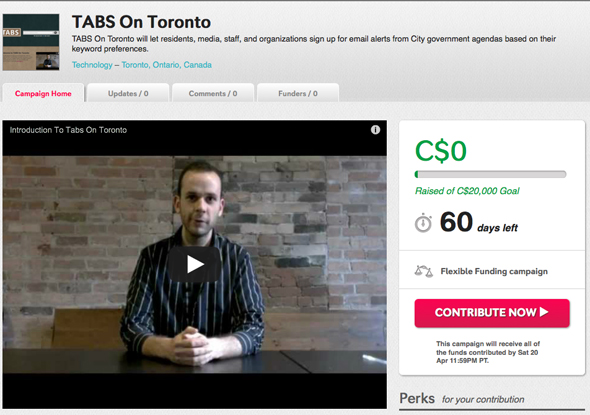 To help make this happen they've started an Indiegogo campaign. In the meantime, you can set you email alerts for "condo" and your closest major intersection, and get ready to rage.