Could dollar vans work as alternate transit in Toronto?

I'm sitting in a rickety white van in Brooklyn with eight strangers, including the driver. Rick Ross's "Diced Pineapple" blares from the speakers, harmoniously intermingling with the squawks of the dispatcher.

This mode of transportation is referred to as a dollar van. They're ubiquitous on Utica Ave., deep in the belly of Brooklyn.

These 15-passenger vans fill a gap in public transit on certain streets in New York that are under-served by the MTA. You hail them just like a taxi, anywhere along the street, and the driver lets you off wherever you desire along the route. A trip costs a flat $2, paid when you exit the van.

The driver of this particular van, a friendly man called Dwayne Gayle, says that as far as he knows, dollar vans have been operating in the area since the 1980s. They also run up and down Flatbush Ave. in Brooklyn, and in parts of Queens.

Jay-Z and Kanye have rapped about them. Third-world countries use them on the regular. So could a similar thing work in Toronto?

If we had alternate transit along Dufferin to relieve some of the frustration surrounding the bus on that stretch, or if we used it to improve the chances of getting anywhere along Finch, for example, perhaps we could remove some of the scowls etching the faces of commuters, and make things easier for everyone â including TTC CEO Andy Byford. 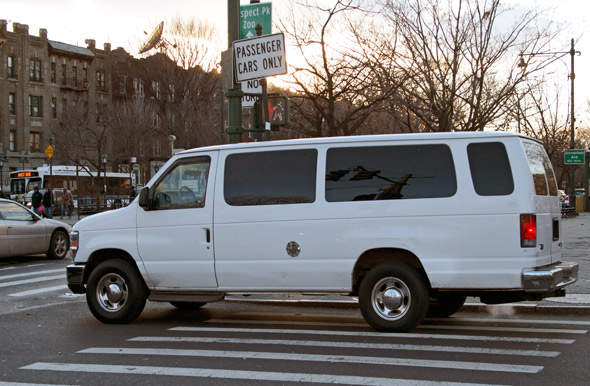 Toronto city councillor Denzil Minnan-Wong says it's a great idea, at least in theory. He says he'd be interested in exploring how alternate transit like this would play out. "If we can do this cheaply and relieve congestion, put me down for some of that."

He notes that there are some issues with putting the idea into practice, though. His first concern is licensing. He says the city would have to make sure drivers weren't operating "junkers that could explode or fall apart at any given time."

Right now, Toronto has about 3,500 taxis with standard licenses, and about 1,500 with Ambassador licenses. Dollar vans wouldn't fit into either of those categories, Minnan-Wong says. They would be in a class of their own, but it wouldn't be hard for the city to create a third type of license.

In order for the vans to operate legally in Brooklyn, the companies running them are required to register with the Taxi and Limousine Commission. That gives them special plates and three stickers for their windshield designating them as legal. But lots of vans operate illegally, too. As of 2011, the Atlantic reported that there were 350 legal vans to 500 unlicensed ones. While running an illegal operation will save drivers money out of the gate, Gayle says it isn't worth it in the long run because of the fines police will inevitably dole out.

"Ya gotta do what ya gotta do to keep up with the system, you know. Or you fade away."

Gayle has been driving this van for about five years. As is the case with other forms of transit, he's much busier during rush hour. He sees many of the same faces each day. The man sitting next to me says he uses the service almost every day. He parks his car at the bottom of Utica, and takes the van to the top to go to work. 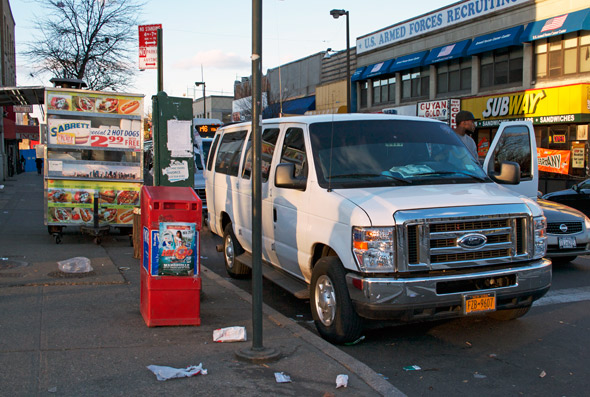 In Toronto, there are a number of issues that draw into question the feasibility of the dollar van as alternative transit. Firstly, there's the question as to whether the TTC would allow them to operate. Minnan-Wong says he thinks it's legislated that the TTC has a monopoly, and may not allow anyone to supplement their operations. (See update below).

"Even if they can't provide good service, it doesn't mean they're going to let anyone else do it."

Operating illegally would be the only option, should the TTC decide that it wasn't much interested in "competing" with dollar vans. Does Toronto have enough of that kind of frontier entrepreneurial spirit to see operators buck the law to turn a profit? Perhaps more crucially, is Toronto dense enough that dollar van drivers could actually make money serving areas with poor public transit or along routes that are constantly overcrowded?

I know I'd hop on one in favour of waiting half an hour for a packed Dufferin 29.

TTC spokesperson Brad Ross says the dollar van system would actually be permissible as far as the TTC is concerned, as long as they operated under an official taxi license. Given that the TTC can't block the vans from running as long as they're licensed, does the idea become more plausible?