It might have taken what feels like an eternity, but Rob Ford's conflict of interest case is finally nearing a conclusion. For roughly seven hours today, the mayor watched on as his lawyer delivered an appeal to a panel of three Ontario Divisional Court judges and listened as the opposing legal team worked to support his removal from office.

Speaking first, Alan Lenczner, the mayor's legal counsel, argued the city was outside of its jurisdiction when it ordered Ford to return $3,150 in donations to his personal football foundation that were solicited using civic resources, claiming the Municipal Conflict of Interest Act only applies when the city or a councillor personally stands to gain financially.

Lenczner followed that since the money was destined for sports equipment, Ford can't be seen to have profited from the situation.

Also in support of Ford, the judges heard the amount in question was too small to be considered a real pecuniary interest, an assertion the mayor himself seemed to contradict during the original hearing. Lenczner confidently declared before the packed courtroom that it wouldn't matter if the amount in question was "$5, $50, $1000, $10,000," Ford decided to speak and vote - entirely by "honest error in judgment" - based on principle. 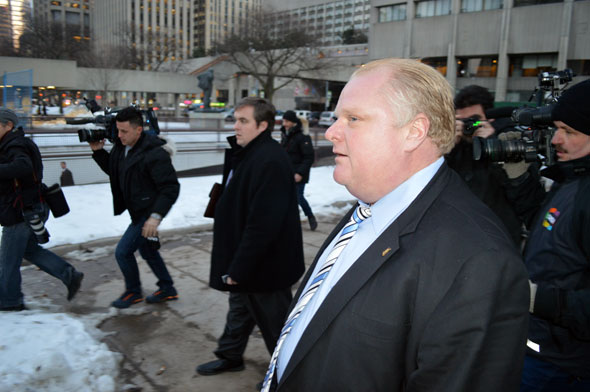 Without a formal role in proceedings, Ford - flanked by councillor Doug Ford, Deputy Mayor Doug Holyday and speaker Frances Nunziata - looked bored and listless for much of the day, staring at the ceiling or rigidly straight ahead, appearing most alert during Clayton Ruby and Nader Hasan's submissions to the court.

Ruby and Hasan, working on behalf of complainant Paul Magder, spent their portion of the day supporting Justice Charles Hackland's original ruling and picking apart the mitigating claims made by the mayor's legal team, noting in particular that there was no legal challenge by Ford when council first ordered him to return the cash.

As the day wore on, the pair seemed to come under greater scrutiny by the judges and were asked to clarify several of their points, possibly giving some insight into the panel's thinking as they prepare their decision.

Addressing the media outside the courtroom, Ford vowed to "keep fighting for the taxpayers" and thanked "everyone for the outpouring of support" related to the case. He also took time to briefly thank Holyday, calling him "the best deputy mayor that anyone could ask for."

A final decision is expected to be delivered in the next few weeks. If the panel upholds Justice Hackland's decision, Ford will have no choice but to vacate the office of mayor. Watch this space. The court proceedings might be done but this one has a little way to go yet.