Rob Ford to remain mayor until 2014

It's official, Rob Ford will remain mayor of Toronto until 2014 after a panel of Divisional Court judges decided to overturn an order to remove him from office. The decision means talk of by-elections and appointments from within council can be put to bed for the rest of this term.

In November, Ford was found to have breached the Municipal Conflict of Interest Act when he took part in a debate on item at city council in which he had a pecuniary interest, namely speaking and voting to overturn an order that he pay back $3,150 in improperly solicited donations to his football foundation. A superior court judge had no choice under the law but to declare the mayor's council seat vacant.

Ford's successful appeal of that decision means he will stay mayor until the next round of municipal elections in 2014, however that's unlikely to silence the dissenting voices who were hoping to have the mayor removed from office as a result of the transgression.

Several councillors, including deputy mayor Doug Holyday, had indicated they would seek election or appointment had Ford been given his marching orders as a result of the appeal hearing at Osgoode Hall on Jan. 7. Naturally, the result will have a major effect on the political landscape in Toronto for the foreseeable future.

The verdict declares Justice Hackland's decision "a nullity" but does acknowledge that the $3,150 figure was "not an insignificant amount, even for a person of Mr. Ford's means." The panel agreed with Alan Lenczner, Ford's lawyer, who argued that council overstepped its jurisdiction when it asked the mayor to return the money in the first place.

Various councillors have called for "business as usual" at city hall following the result. Councillor Giorgio Mammoliti, who recently left his position on the mayor's executive committee, said Ford needs "to start acting like a mayor," going forward, adding "the sideshows have to finish. I said to him 'you have to start dressing like a mayor' as well."

Mammoliti also re-iterated his belief that he is at the centre of a clandestine political conspiracy, telling a scrum of reporters "it's been confirmed" his phone has been tapped. Yesterday the York West councillor announced he's hired a private investigator to look into an alleged attempt by former and current city staff to "go after him."

Clayton Ruby, the lawyer for Paul Magder, the Toronto resident who brought the case against Ford, says he'll seek leave to appeal to the Supreme Court of Canada, the highest court in the country. That move could leave the door open for this case to continue. Here's the full text of his statement:

The Court has let Rob Ford off on a technicality. We find that disappointing, particularly since the Court found that Mr. Paul Magder was right on the facts.

We believe that there are serious errors of law in the judgment and we will ask the Supreme Court of Canada for leave to appeal to that Court. It must be acknowledged that such appeals are not easy but this remains an important issue for all citizens.

Especially troubling is the finding that if a politician raises money from lobbyists and directs that money to his or her own personal interest, such abuse is beyond the reach of government oversight. This raises the possibility of American-style Political Action Committee (PAC) fundraising, which should be of great concern to all Canadians. (See Decision, paras. 49 and 70.)

No further comments will be made by Mr. Ruby or Mr. Magder.

Reading a statement, a subdued Rob Ford called the court case a "very, very humbling experience," thanking his legal team, family, and the residents of Toronto who supported him. "It has been a very, very challenging time for all of us," he said.

"The job is not finished yet, and I plan to spend the next six years getting the job done," he continued. "Moving forward, we'll continue to do the work we were elected to do. We're doing a great job turning the city around."

"Together we will build a Toronto that is, hands down, the best city in the world to live, work, and invest in."

Outside, Doug Ford said there were "handshakes all round" when his brother heard he was keeping his job. When asked about a possible Superior Court of Canada appeal, Doug said the next steps, if there are any, are "strictly up to Clayton Ruby."

Ford will leave city hall at some point later today to meet the kids at Don Bosco Catholic Secondary who Doug Ford says are "all cheering" the result.

One lingering question that remains is who pays the court costs. It's possible that, as the loser in the case, Paul Magder could be saddled with Rob Ford's legal costs. In the conclusion of their ruling, judges Then, Leitch, and Swinton said they were willing to make a final decision on who foots the bill if the two parties were unable to agree within 30 days. 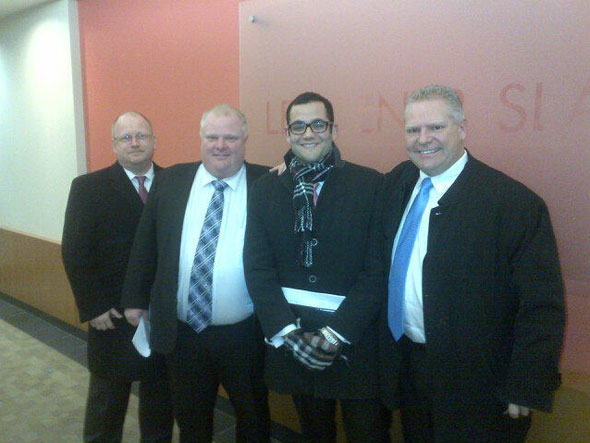 Rob Ford's press secretary, tweeted this picture with the caption "all smiles..."

Here is the full text of the decision: