At first, the crowd gathered in front of 365 Bloor Sr. E. is fairly quiet. Holding their hand-painted signs, they hang back near the building's faรงade and speak quietly to one another in Hindi.

Brows are furrowed and eyes are deep and serious, but once in a while, a small ray of excitement will light up someone's face, sometimes in the form of a smile.

This group of about 50 is gathered outside of the Indian consulate in Toronto on a Saturday afternoon. They are here to speak out against widespread sex crimes and violence against women in India, where it's been widely reported that a rape occurs every 20 minutes. 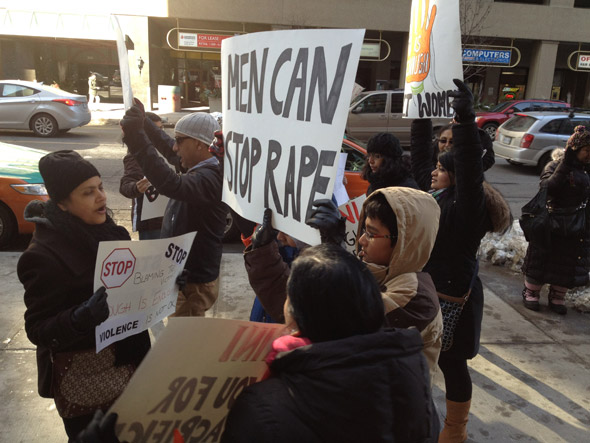 Their protest, of course, was spurred by the death of a 23-year old woman in Delhi on Dec. 29. Two weeks prior to her death, she was brutally raped on a bus by six men after leaving a movie theatre with a friend. They used an iron bar to assault her, as well as their own bodies.

After the rapes, she was thrown from the bus to lie naked in the street. She laid there for an entire hour before police finally arrived to help her. Members of the South Asian Indian community in Toronto felt they couldn't sit in silence following the woman's death, so they took to the streets outside the consulate.

They also wrote a petition calling for police to be trained to handle sexual assaults, for rape kits in hospitals, and for fast-track courts to handle the backlog of rape and sexual assault cases. 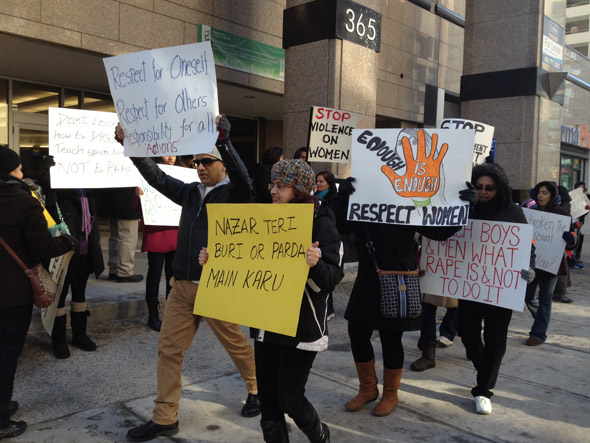 They're only 50 out of the 484,655 or so people of East Indian descent living in Toronto. But Meeta Roy, one of the rally's organizers, says even a small group can make a significant difference.

"I know these [protests] are small steps, but every one is a change."

Many in the crowd Roy organized are first-time activists. For them, enough is enough, and once they overcome their shyness, they make their anger heard up and down the sidewalks of the Bloor St. E. and Sherbourne St. area.

"If you want to have sex, ask, listen, respect." It sounds like a call for attention to be paid, but there's something more to it--it also sounds like a warning. 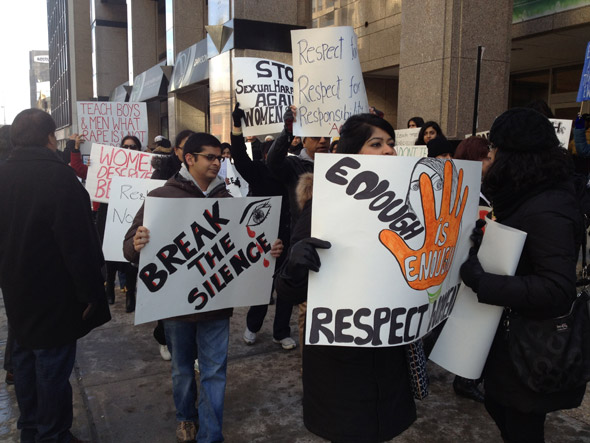 There is discomfort in the strong male voices when it comes to the words "rape" and "sex." Those words are a bit quieter. But after the first few rounds of chants, the words learn their own purpose, and the chants flow easily into the crisp January air.

Shreya Roy was one of them. She's a 23-year-old med student.

Roy has been involved with anti-VAW work in the past, and she says her community is making her proud with their ever-growing refusal to accept crimes against women.

"It's heartwarming that they're being so active.

"To see my elders saying the word 'sex' in public...this is really, it's leaps and bounds for me." 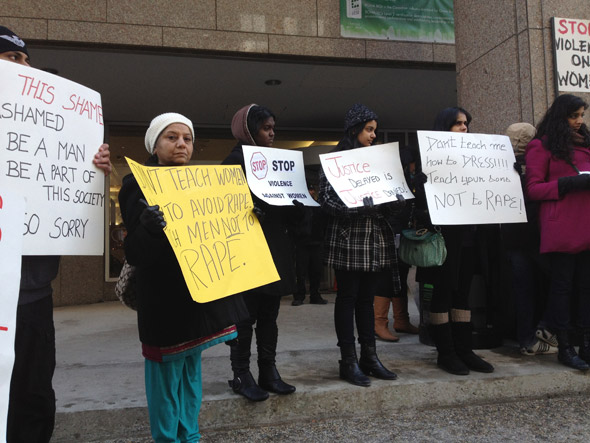 This is Aruna Dutta's first protest. She says she's standing out in the cold to call for justice for women everywhere.

"There are many countries where women are suffering this problem. In India, it came to light.

"It is ignored in every country. This is not a game, it is a crime against them. That is why I'm standing here."

Parveen Gill was one of two organizers of Thursday's protest. She says if members of the community living all over the world rise up in protest, the Indian government can't help but take notice.

"On one hand it is a land of spirituality and on the other we see those kinds of heinous crimes on the street," she says. "I see a kind of paradox."

"For me, what matters is safety. If the world is watching and India's growth is only economic growth, there should be some social progress."

Writing and photos by Sarah Ratchford