That time when Toronto had an Organ Grinder

Most childhood era birthdays tend to be innocuous vanilla affairs destined to end up mired in a pea soup of foggy memories, but no kids growing up in Toronto in the 1970s, 80s or 90s will probably ever forget if they attended a birthday party at The Organ Grinder at 58 Esplanade. 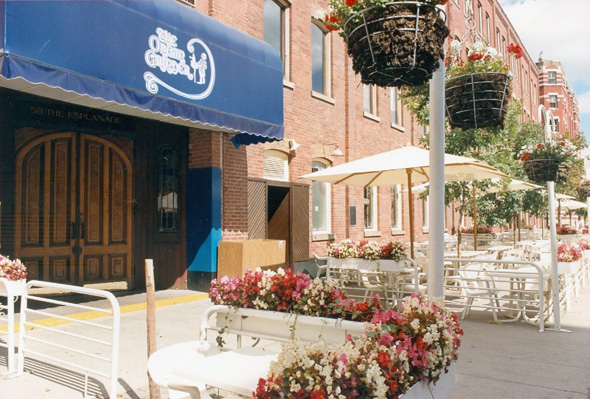 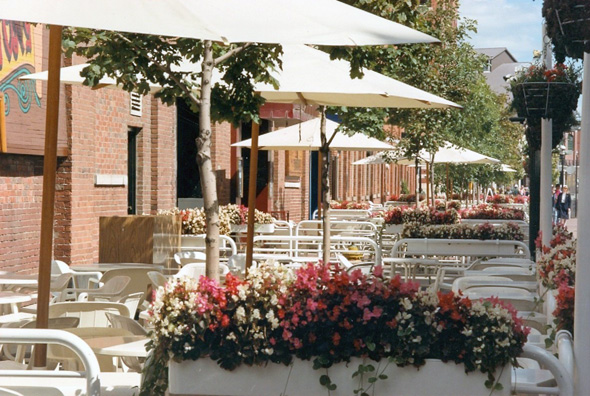 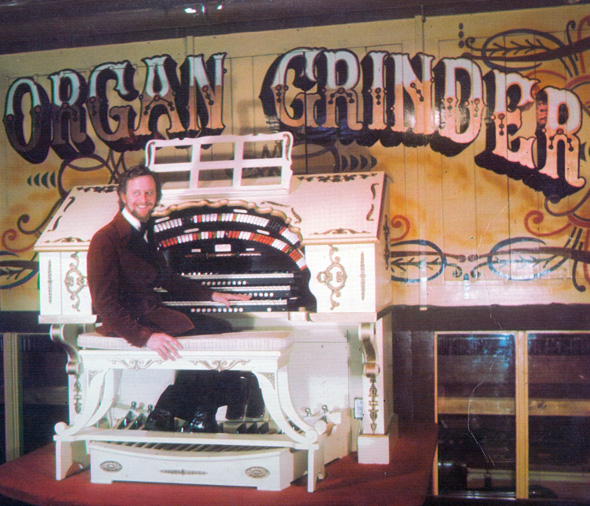 Opened in the spring of 1975 and the only restaurant of its kind in all of Canada â "a musical pizza eatery" â the Organ Grinder served up an unforgettable mixture of ear piercing sonics, mouth-watering taste and visual mayhem.

There were pinball and arcade games, silent Chaplin, Valentino, Pickford and Fairbanks films running on a loop, piping hot cheese-heavy pizza washed down with copious amounts of ice cold Coke, Sprite and Minute Maid, and of course the star attraction, The Mighty Wurlitzer organ itself. 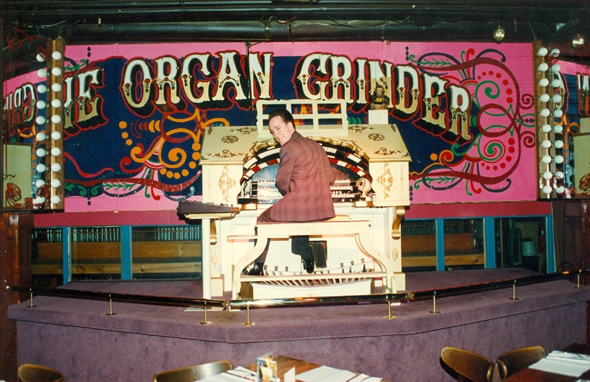 Built from parts of over 50 different pipe organs dating back to the turn of the century, The Mighty Wurlitzer was an aural behemoth. The largest pipe organ was 16" long while the smallest measured no longer than a soda straw. The organ had over 1,000 pipes made of wood, zinc, lead and tin. The deep bass sound this produced was unlike anything you had heard before. 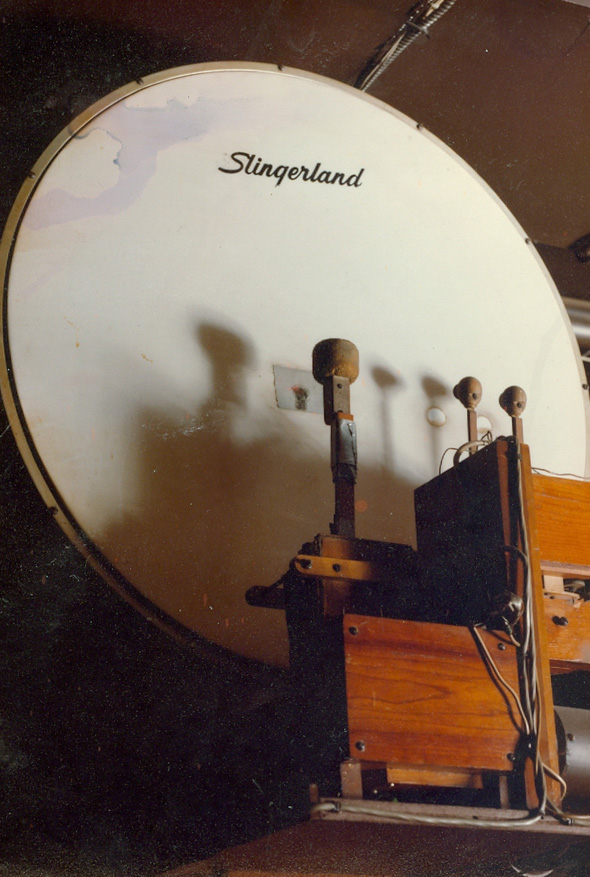 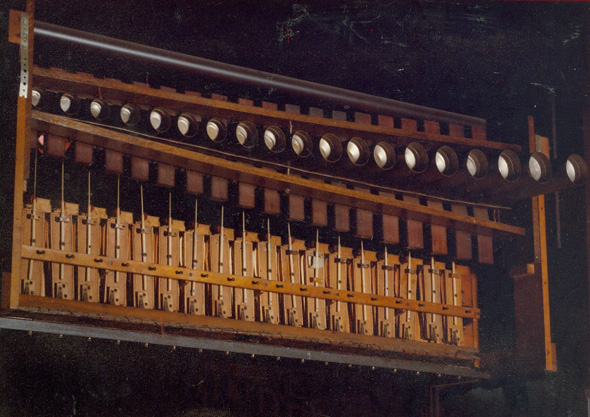 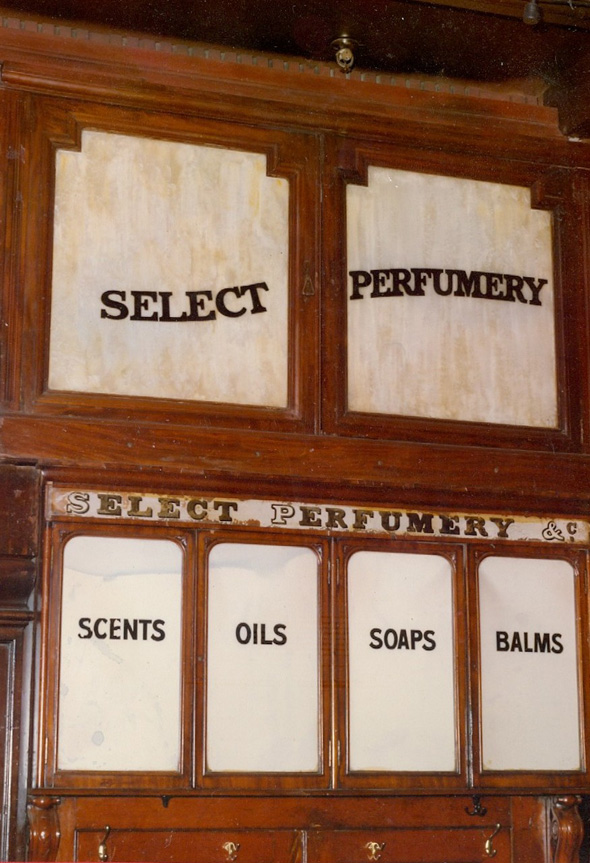 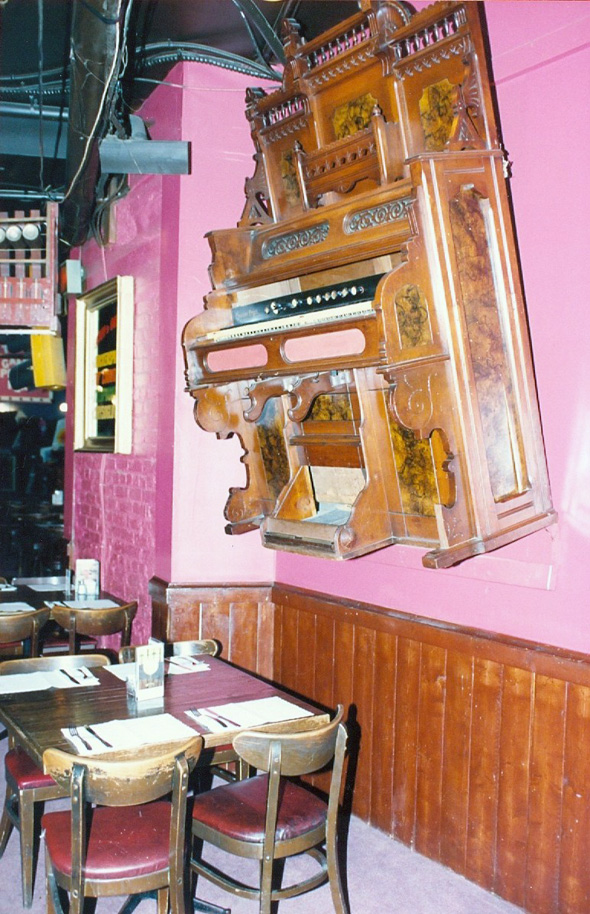 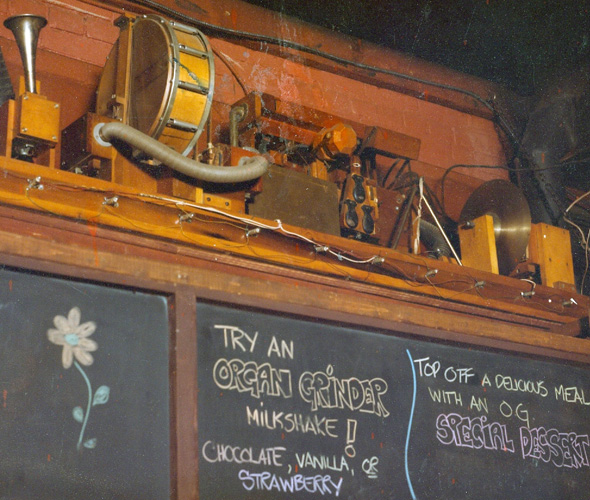 Mirror balls, strobes and the octagonal UFO lights were all controlled by the organist, who would often let loose on them as songs built to their climax, resulting in a rave like atmosphere only compounded by the sugar highs which were doled out generously via children's cocktails with names like "the Crazy Cranberry", "Miss Kitty Colada", "Dracula Draft" and perennial kid favourite "The Gremlin Gimlet" (described in the menu as Orange juice, Sprite, and green stuff). 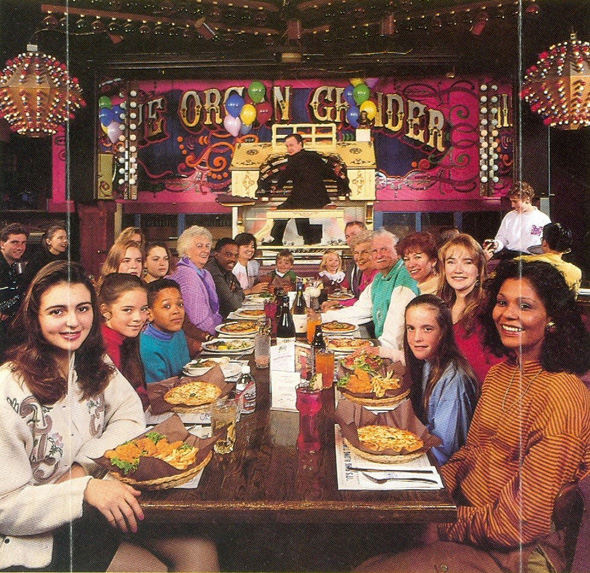 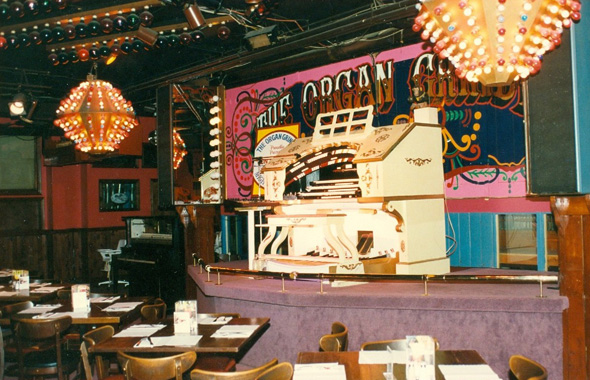 In addition to the famous performance pizzas ("Opening Number," "The Mighty Wurlitzer," "Piper's Delight," "Hawaiian Song," etc.), The menu was filled with lasagna, spaghetti, chicken, burgers and veal parmigiana, assuring patron's bellies would leave as fulfilled as their brains. 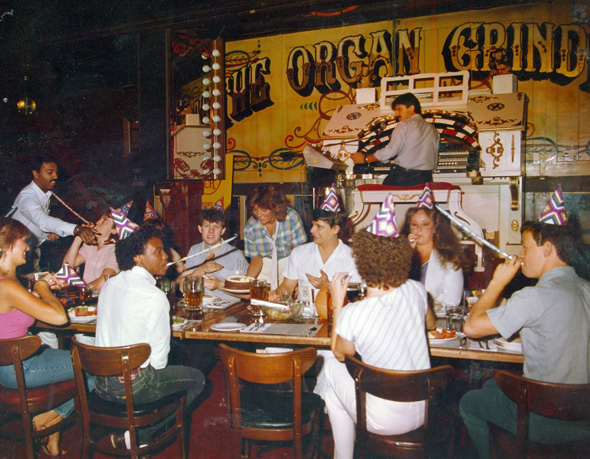 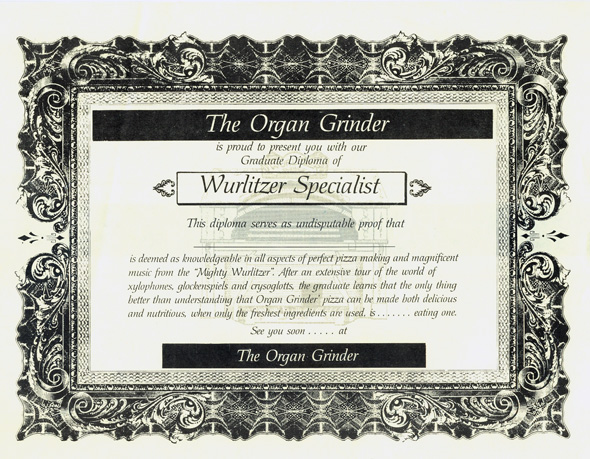 The Organ Grinder was a crucial part of the Esplanade's breezy scene, which for years was also home to upscale boozers Scotland Yard and Brandy's, as well as The Old Spaghetti Factory, which thankfully has not changed one iota and still offers up a true old-school Toronto nostalgia fest (in addition to some great and reasonably priced food). 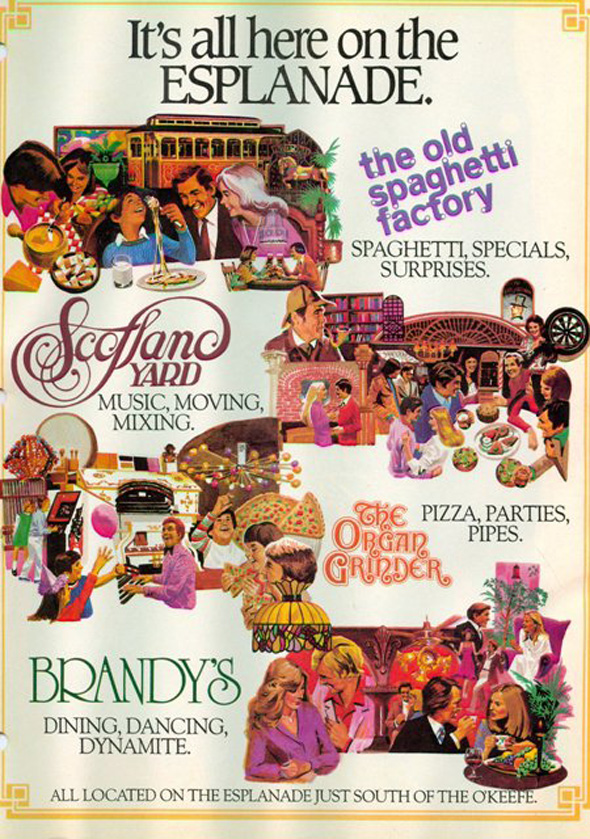 Occasionally you can still discover old Organ Grinder glasses or copies of the prized Don Thompson vinyl soundtrack knocking around in local thrift stores, reminders of what a local sensation the place was back in the day. While Chuck-E-Cheese's had the franchised ubiquity, and The Mad Hatter had the underground notoriety, The Organ Grinder was special and unique enough that if you got invited to a party there, you would do well to spring for an extra Kenner Star Wars figure or Barbie doll for whosever birthday it was. 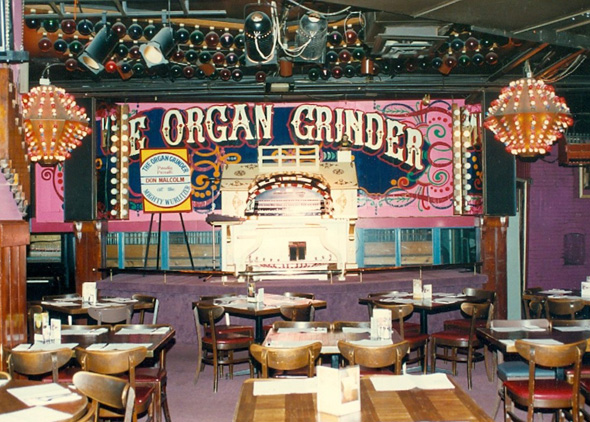 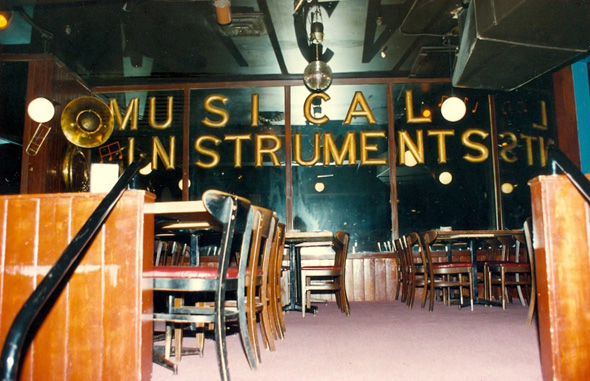 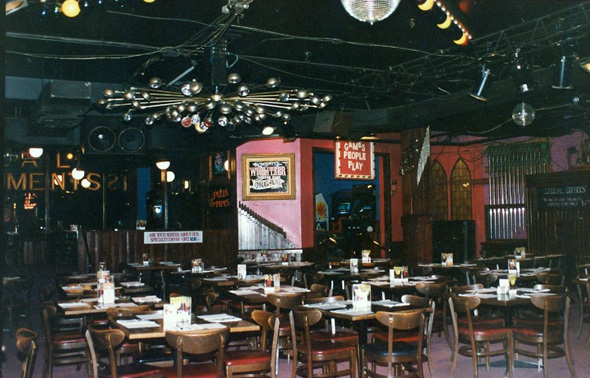 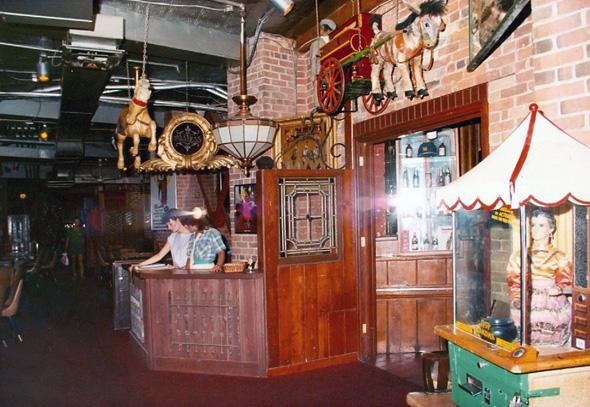 Sadly the Organ Grinder was forced to close in 1996 after 21 years of good vibes, and all of its wonderful artifacts were liquidated at auction. The organ itself was purchased by an individual from New Hampshire who dismantled it, loaded it into a transport truck and then rebuilt it in his own house.

While there are still a few organ based pizzerias scattered around North America, the once popular trend has definitely subsided, much like the Animatronic based pizzerias so lovingly chronicled in the brilliant documentary The Rock-a-fire Explosion. Much like the people in that film, those who experienced The Organ Grinder first hand will always remember that bedazzling, exciting and frankly overwhelming environment and the wonderful times it provided Toronto denizens for over two decades. 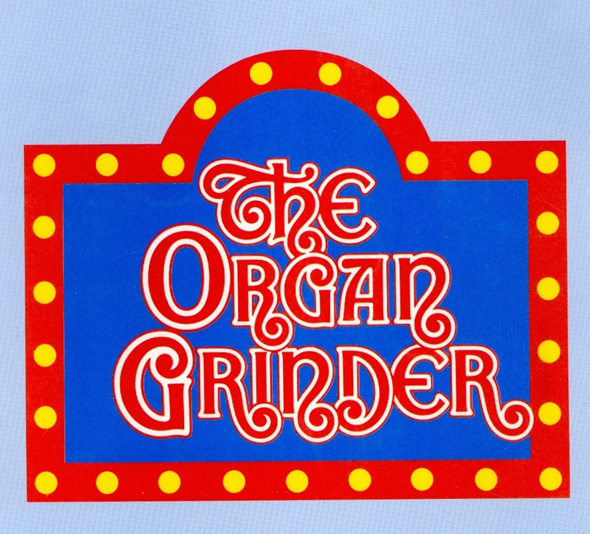 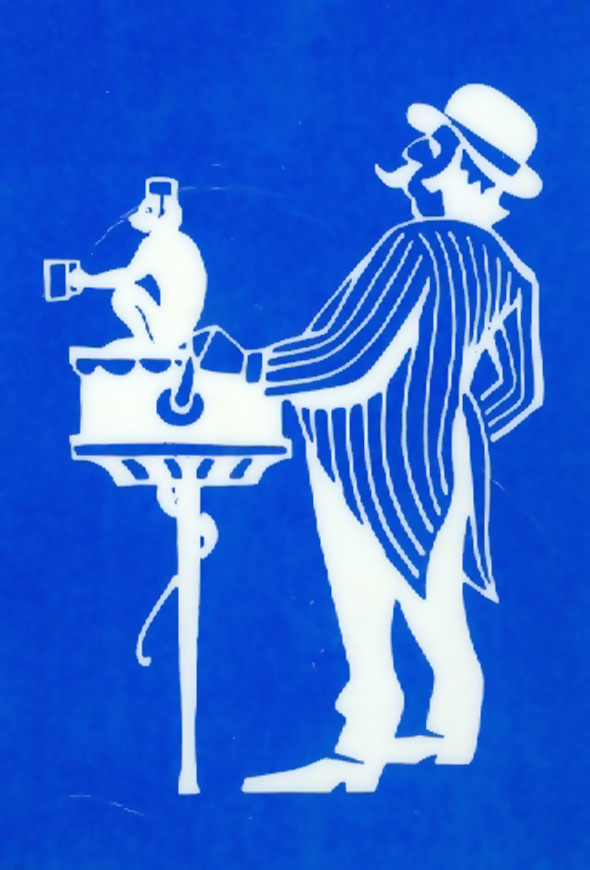 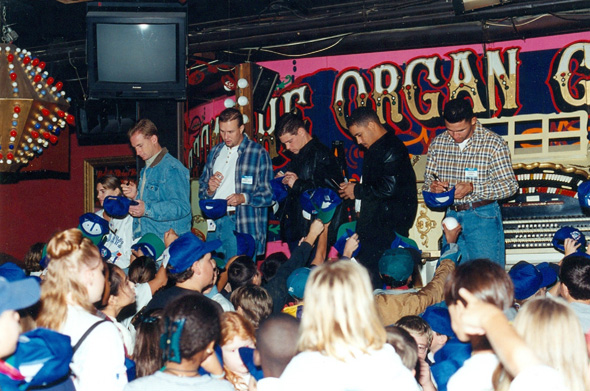 Special thanks to Peter Hnatiw and The Old Spaghetti Factory for the pictures, and memories.