"Transportation" and "success" are words that all too rarely share a sentence in Toronto. Yet, here we are. The Atlantic Cities has named the resurrection of Transit City one of North America's biggest transportation policy successes of 2012. I know, right?

OK, OK, we're not calling it that anymore, but according to the US-based urbanism blog the revival of the LRT network is a sure step towards creating a true mass transit system. The short citation also reserves a moment to take a half-jab at the downfall of Rob Ford, himself the architect of Transit City's initial demise. 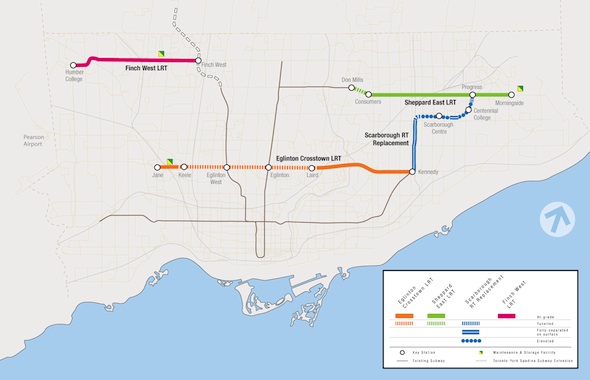 A proposal under David Miller, Transit City, like every transportation project in Toronto, was a hugely divisive issue. When Rob Ford was elected in 2010, one of his first orders of business was to declare the light-rail expansion dead. Never mind whether or not he had the authority, it was done. Over. Until, of course, it all went south for Ford and he lost control of the transit agenda and every other important topic at city hall. Then it was back to square one for the project, minus two years of progress.

The explosion in real-time cellular updates, a spike in Amtrak passengers, the post-Sandy subway fix, and California's approval of a high-speed rail link between San Francisco and LA are also among the other high-ranking ideas and events worth of inclusion.

How do you rate this year for transit in Toronto? Boring machines continue to push northwest on the Spadina extension, the first of our new streetcars arrived, TTC drivers stopped texting and reading at the controls, and work began on a new-look Queens Quay West with a dedicated right of way. This may well be your last chance to talk TTC before 2013 (or the world ends.) Sound off.