The Bond Condos may be a nod to the venerable SIS agent James, or else a reference to our collective and persistent affinity ('bond') for 400-something-square-foot living spaces. I'm still not sure. According to developers, The Bond is a "connection, a destination, a state of mind." Which, still, tells me nothing. How can a condo tower be a state of mind? Anyway (and existential questions aside), the enigmatic "Bond" is set to open its door sometime in 2015, welcoming hundreds of new condo owners to their new special space on Adelaide Street West. Right next to hundreds of other new special spaces on Adelaide Street West. Hm. Here's a closer look at The Bond Condos. 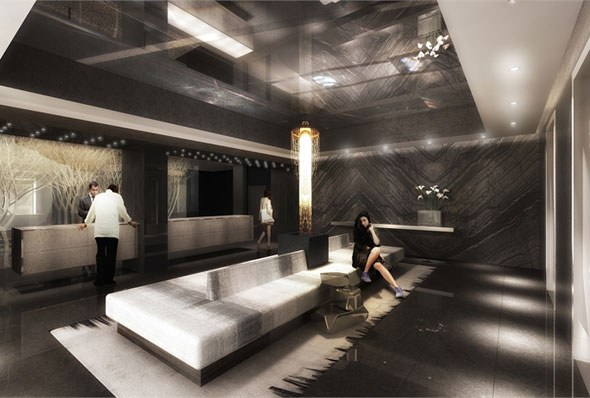 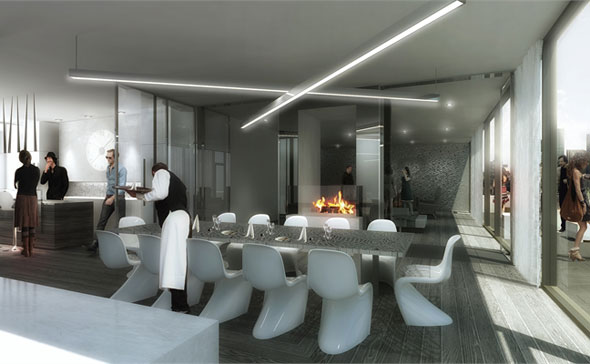 If you can't beat 'em, join 'em, right? (Or else, just move uptown.) The Entertainment District will be absolutely saturated with tall towers by the time The Bond opens its doors, so 41 storeys seems totally appropriate in terms of height. Sure, the area might be plagued with crushing density, perpetual shade, and brutal wind tunnels — but look, a golf simulation room! Eh, that heading reads "Good," doesn't it? Moving on...

In terms of aesthetics, The Bond is certainly one of the more pleasing-looking projects poised to land in the area. Its podium actually offers a little visual interest in contrast to some of the more sterile new bases along Adelaide, with a tower that doesn't come off as overly domineering. And hey — Hooters is just a few steps away for some late night...wings.

And speaking of location, there will always be people who want to live in the heart of the action, and in that respect, The Bond delivers. Access to public transit is about as good as it gets from this location, without the risk of the streetcar breaking down right outside your front door. Residents will have plenty of options for things to do, see, and eat, with practically everything (minus a decent grocery store) within walking distance. 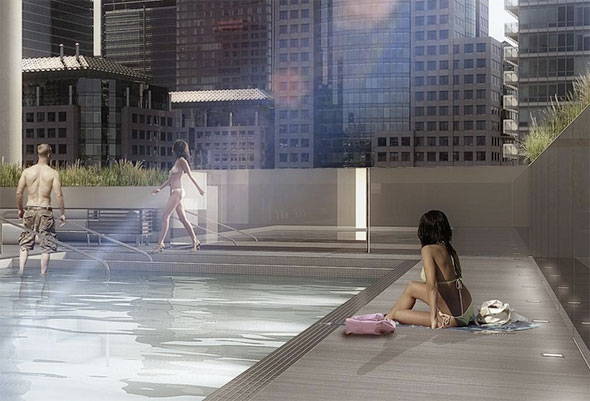 Condo marketing material is always hilarious, but The Bond certainly wins for its renderings. Each depiction oozes a sort of ostentatious 20-something sensibility, with one party-room image focusing on a waiter cleaning a table as a resident shows off her shoes on the balcony, and another showcases the outdoor pool that presumably only plays host to beautiful people. If these depictions are taken to be true, I'll assume I'd be the only one eating a tub of day-expired yogurt off my stomach by the pool.

And if I did, for some reason, end up moving into The Bond, I probably would actually opt to eat in common areas. Either that or forgo my bed in favour of a functional dining table. After all, what else can you really do when your one-bedroom unit is but a pitiful 400-something square feet? Buy a folding card table? But beyond being just terribly compact, these suites are symptomatic of the horrible kitchen, living, and dining room hybrid sweep that, when executed poorly, becomes nothing more than a living room with a fridge. There's little counter space, no room for an island or dining table, and poor definition of different spaces. But hey, the balconies are pretty big — just call that your dining room in the summer and eat out the rest of the year. 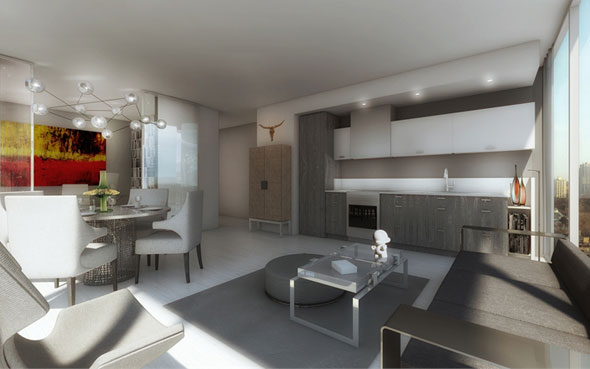 That is, of course, if the Entertainment District doesn't become a barren condo-land (Ã la CityPlace) by 2015. While I'll concede that that may be a bit hyperbolic to say, it's true that most new condos that go up in this area seem to first annex an 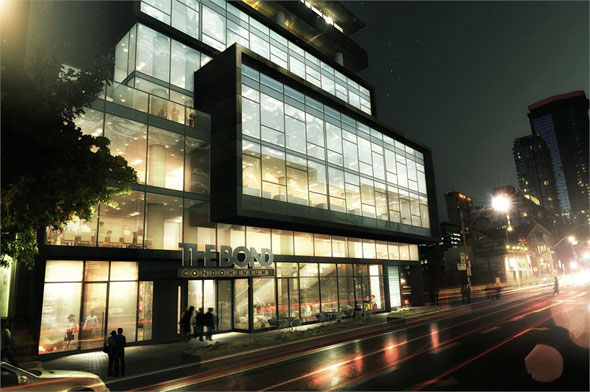 existing restaurant or entertainment space. Forum commenters on Urban Toronto have already begun discussing the implications of the trend, and suffice to say that I agree when they suggest that there might not be too much "entertainment" left to this district. At-grade retail just doesn't have the same charm. The Bond does have its own healthy little collection of amenities (which will probably get quite pricey, by the way) but they don't make up for its tiny suites and potentially threatened area attractions.

It's all yours, beautiful people.