Toronto could have its first east-west separated bike lanes within a year if the public works and infrastructure committee accepts a new report calling for a total reworking of the cycling facilities on Wellesley Street and Hoskin Avenue.

If adopted and approved by city council later this month, new curved curbs like the ones presently found on Sherbourne Street could be in place between Parliament and Yonge by next year. A second phase would witness separated lanes installed on Hoskin Avenue with a connection between the two added to Queens Park Crescent in 2014. 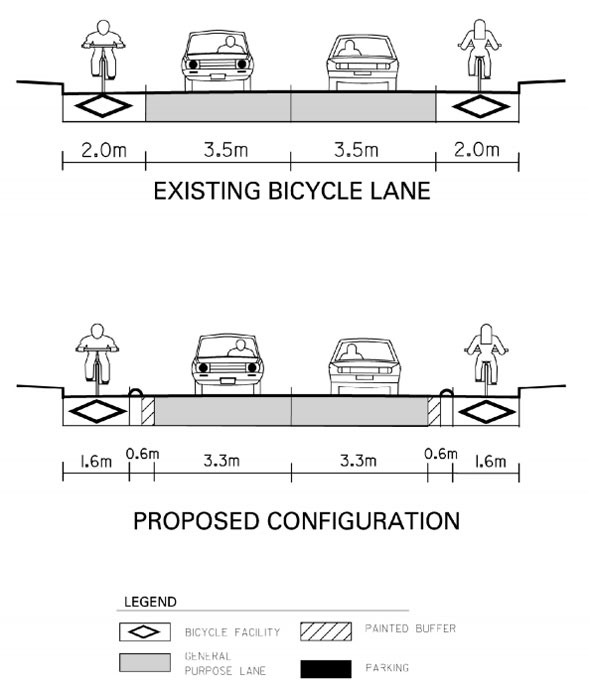 The project will cost in the neighbourhood of $975,000 and will likely be tethered to planned resurfacing work on Wellesley scheduled for next summer. In what could be a controversial move, the new lanes will eliminate all street parking on the thoroughfare except at busier sections near Queens Park and Bay Street. New, accessible TTC bus stops on raised platforms are so part of the plan.

At major intersections along the proposed bike lanes, cyclists will be able to make two-stage left turns using special bright green painted areas. The city also plans to add bike boxes at the head of each set of lights and ban right turns at red lights for motorists.

Presently, the cycle lanes on Wellesley are identical to the ones about to be removed from Jarvis Street: painted road markings without any physical barrier to vehicular traffic. "Sharrows," markings telling bikers and drivers to share the road, are used in narrower sections of the street.

The proposal joins the already confirmed Queens Quay East lanes, a precursor to separated biking along the entire waterfront street, which should be open in the spring. Is this sudden surge in the number of in-construction and proposed separated lanes surprise you? Is this a good place to build the first major east-west cycle way?