Sunday Supplement: The Don Valley's rainbow tunnel, a look at sign rules, and rejected names for the Raptors

A small, brightly colored underpass in the Don Valley might not seem like a place with much of a story, but the rainbow tunnel in Milne Hollow is certainly worth noticing. The latest chapter in its history was written this week, and we take a look back at the paintwork's origin.

Also this week, there's a look at the almost unenforced a-frame sign bylaw that made headlines this week and a list of unused names for the Toronto Raptors.

Somewhere Under the RainbowA painted rainbow marking the entrance to a pedestrian underpass in the Don Valley got a fresh lick of paint this week, its first official facelift since it was created in 1972.

Painted by Norwegian muralist B.C. (Berg) Johnson by hanging suspended from the CN tracks above, the piece was intended to bring a little cheer to the city's dour commuters. Unfortunately, the authorities weren't too jazzed about the idea.

The rainbow was repeatedly threatened with removal by the city despite local popularity among walkers in Milne Hollow near Lawrence Avenue and passing motorists. The parks department painted over the rainbow with grey paint several times before learning to love the artwork, which was often repaired by concerned local residents.

Despite its numerous concerned well-wishers, including artist Peter Doig, the DVP rainbow started to chip paint and attract tags from other graffiti artists in recent years.

According to The Star, the cost of the official paint work was budgeted into the East Don Trail construction costs and was completed this week. Its full, bright colors will cheer a new generation of eagle-eyed Don Valley motorists. 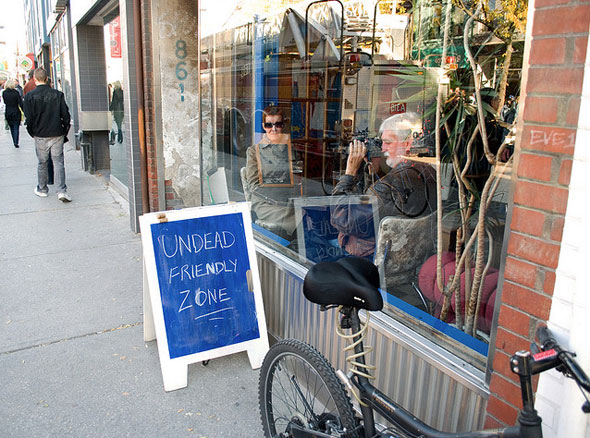 A-frame signs - sandwich boards to you and me - were in the news again this week when Global reported just 41 of the possibly thousands of signs on public sidewalks were registered and licensed with the city. I suspect most business owners that plonk a sign outside the front door don't know they need a license, but still, good enforcement guys.

Here's a list of some of the unusual (and hyper specific) regulations in the a-frame sign bylaw: 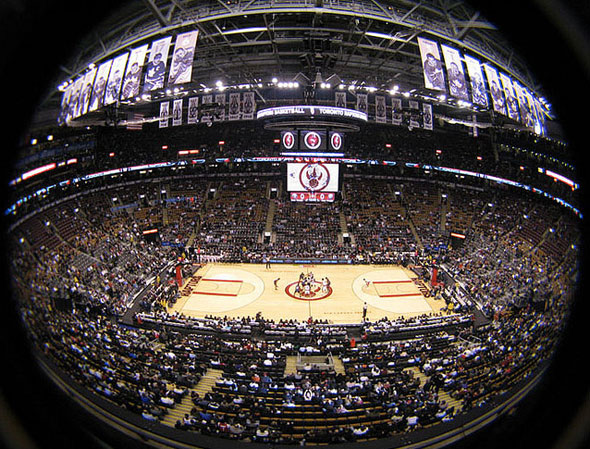 Last week we took a look at some of the rejected names for the Toronto Blue Jays (or Giants, Lakers, or Blues) to celebrate the 20th anniversary of the team's first World Series win. Since the NBA season officially kicked off this week, let's check out some of the names that fell by the wayside during the public naming contest.

Professional Basketball Franchise (Canada) Inc. (as it was known pre-naming) chose the Raptors name on 15 May 1994 in the hopes of cashing in on the popularity of the Jurassic Park movie franchise. The silver trim on the team's uniforms is named "Naismith Silver" after the Canadian inventor of basketball, James Naismith.

The team played its first seasons at the SkyDome and Maple Leaf Gardens before moving with the Leafs to the Air Canada Centre. A planned arena next to the Eaton Centre at Bay and Dundas never materialized.