A remorseful and hoarse Rob Ford has confirmed he plans to appeal the decision of a Superior Court judge to remove him from office, but maintained his choice is "not a criticism of the court."

"Looking back, maybe I could have expressed myself in a different way," he said, stepping away from a council meeting continuing on the other side of a dividing wall. "To everyone who believes I should have done this differently: I sincerely apologise."

Earlier today, Ford was told by the head of the city's legal team he will not be able to stand in a byelection if his appeal against yesterday's conflict of interest verdict is ultimately unsuccessful. The news means he will likely have no option but to quit if he is unable convince a panel of three judges to overturn 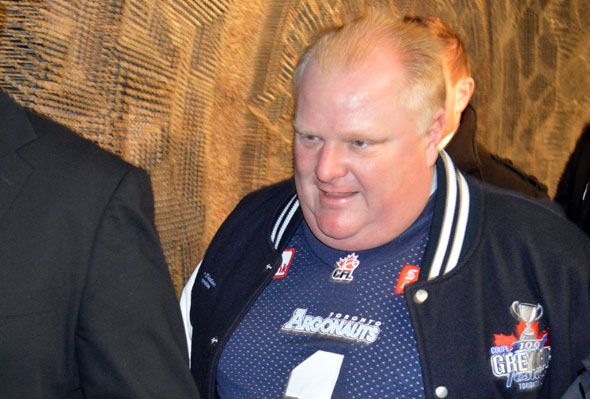 Justice Charles Hackland's decision to declare his seat vacant.Speaking before council this morning, city solicitor Anna Kinastowski reminded the chamber that Rob Ford remains the mayor of the city for the time being and confirmed her team's belief that Justice Hackland has blocked Ford from seeking office until at least 2014, the end of his present term as mayor.

A spokesman for the mayor confirmed that a request for a temporary stay will be considered by the court on December 5th. The formal appeal will be heard on January 7th. There's no word yet on how long it might take judges to produce a final verdict. 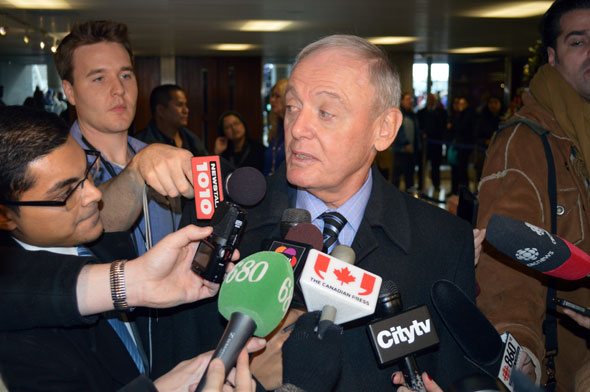 Deputy mayor Doug Holyday, who could become leader on an interim basis if certain scenarios play out, said councillors will "have to get above" Ford's legal troubles and focus on running the city. "We still have things to do and we intend to do them," he said.

Ford initially refused to answer questions from the media as he made his way from the council chamber to Grey Cup celebrations in Nathan Phillips Square. Wearing an Argos jersey on his way back inside, he declared he was "feeling fantastic" about the team's win. He disappeared into a sideroom without further comment.

The mayor signed off by pledging continued respect for taxpayers at city hall "until the people elect someone else to do the job."