Highlights from the 2012 Royal Winter Fair

It may be called the Royal Agricultural Winter Fair, but this year's event seems more "of the city" than the land. Now in its 90th year, The Royal 2012 boasts hanging chandeliers, gourmet coffee roasters, and a showcase of brand new hybrid vehicles, along with the usual rooster coop and milking-a-cow educational display. Consider it a juxtaposition of the most basic divide.

This was not my first visit to the annual November fair, but it was the first time I noticed just how much it caters to the Toronto urbanite. There's a petting zoo mere metres from Exhibition Hall F (which is filled with rows of sheep, cattle, and more), a Subway Sandwiches stand right next to a vendor selling pure maple syrup, and a setup for Toyota's latest line of hybrids set beside a row of Bockmann utility trailers. What? 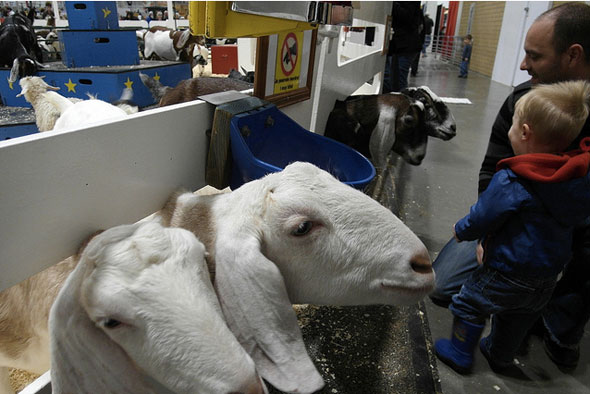 You can sense the division right from the parking lot. Some spots are occupied by the usual Toronto-prevalent mid-sized sedans, while others host SUVs (alright, we still see a lot of those in the city anyway) and pickup trucks with bumper stickers reading, "A woman's place is on a horse." Heh â my mind finished that bumper sticker before I got to the end. In any case, the urban/rural divide is clear right from the get-go.

This year's fair includes a couple of new exhibitions, including an extended chef competition hosted by Padma Lakshmi and Curtis Stone. The stage, strangely enough, is surrounded by sophisticated lounge seating and modern bistro tables, though I can still hear the clucking from the poultry competition nearby. Next to the competition area is the Royal Court Restaurant, which is bordered by a perimeter of faux hedge green. One of a couple restaurants on the fair's grounds, Royal Court features black hanging chandeliers, covered tables, and sparkling wine glasses, along with just the faintest hint of that unavoidable barnyard smell. You get used to it.

Trying to shed by city-girl skin, I decide to abandon the stalls of poutine and fine jewellery, and venture to the "barn" area where sheep are being prepped for their show. Bypassing the six lounging cows and a group tiny piglets piled under a heat lamp (I think a pang of bacon-guilt made me sweep by more quickly), I went to check out the sheep to see if I could try to deduce which were the stars of the flock. 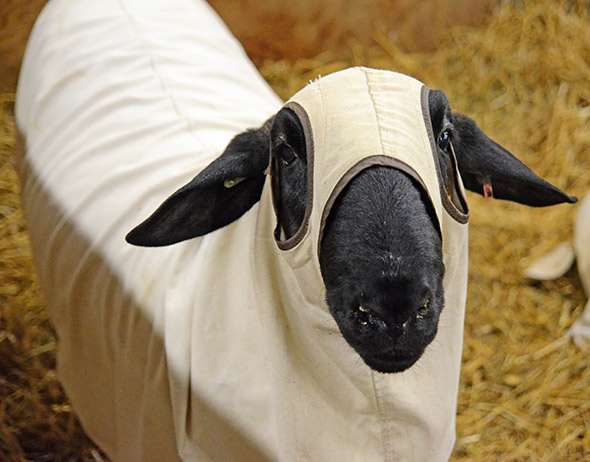 These sheep, however, were covered with tarp-like smocks, some with holes cut out for the eyes and ears. I absurdly first concluded it was some sort of ghost Halloween getup, but was immediately shamed when a farmer told me it was to keep the sheep clean before the show. Point taken â I'll stay off the farm.

Next, I went to check out the rural-geared shopping, including fly sheets for horses (some, interestingly, available in Zebra print), saddle equipment, and custom leather boots. And while it seemed to me that the Der Dau stand was mostly being perused by the equestrian-minded, something tells me it would have done just fine offering its "niche" product to any number of sophisticated Toronto communities.

Before leaving I, of course, had to check out the food stalls, which included chains such as Pizza Pizza and Subway (I think I counted two of each), and many independent stalls by rural operators. Some offered barbecue classics such as pulled pork, burgers, and hot dogs, while neighbouring stalls went the roti route, others with teriyaki, and bowls of lo mein. I suppose in food courts, as in life, such parallels can serve side by side.

Photos by John Elmslie and PLTam in the blogTO Flickr pool.