What Toronto can learn from how other cities fund transit expansion

The Greater Toronto Area needs to be taught a lesson when it comes to developing, funding, and building new transit projects in the 416 and beyond, according to a new report.

According to the University of Toronto's Institute on Municipal Finance and Governance, IMFG to its buddies, Toronto and the surrounding region can learn from other North American cities in several key areas when it comes to pushing its transit funding conversation forward.

Most notable, perhaps, is the call for strong leadership on the Greater Toronto and Hamilton Area's transportation needs on a provincial level. Right now its hard to point to the public figure at the controls of the region's various transit projects who might be able to champion support for new funding.

"To really advance the discussion you do need political leadership on a regional basis that really engages local leaders," says André Côté from IMFG. "In all sorts of places you'll have situations like here where you have a whole series of local operators run by the different municipalities but you need some type of leadership at a regional level through the transit authority or the higher order of government."

The report itself points to leaders in California and Utah that were able to steer public opinion in favor of funding transit expansion with taxes and fees. In Salt Lake City, the Utah Transportation Authority persuaded drivers to back new projects with the tagline "Even if you don't ride it, you use it." 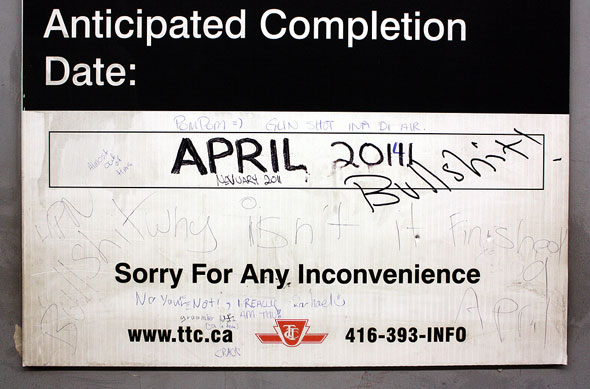 We might not even be that far off - there are some indications people already support small sales taxes in principle. Increasingly, we're discussing ways of paying for new infrastructure, and that's definitely something positive.

It's easy to believe our needs are different from those elsewhere, especially given Toronto's checkered past when it comes to bringing necessary transit projects to fruition. Côté says it's possible a lack of a clearly-defined master plan even in the wake of recent subway vs light rail debates could be a fundamental part of the problem. In reality, the report says, we're anything but unique.

"I think the take-home lesson is our region is not niche," Côté continues. "The challenges we face with transportation are similar to what's faced in other city regions and they've all found ways to work through these issues and make the much-needed investments to improve their quality of life and economic potential. It's a positive message."

Here are some of the other key lessons from in the report:

Do you agree with these suggestions - do we need a leader to help steer the ship? Could we do more as a region to talk transit funding in a rational, pro-active way? Are we on the right track at the moment?

Photos: "Yonge subway enters Bloor station, 1994" by jer1961, and "The Public Has Spoken" by MrDanMofo in the blogTO Flickr pool.