The TTC offers a glimpse at its new articulated buses

The TTC has released the first computer-generated images of its new clean diesel articulated buses currently under construction by NovaBus in St-Eustache, Quebec. The first 27 vehicles to roll into town in 2013 will be pressed into use on the city's busiest routes - likely the 29 Dufferin, 7 Bathurst, 85A Sheppard, among others - as a priority.

The $24.3 million fleet of Nova LFS Artics are 18.8 metres long and have a total capacity of 112 seated and standing passengers. According to Transit Toronto, the current hybrid vehicles currently circulating on city streets hold roughly half that number. The full spec sheet is available here. 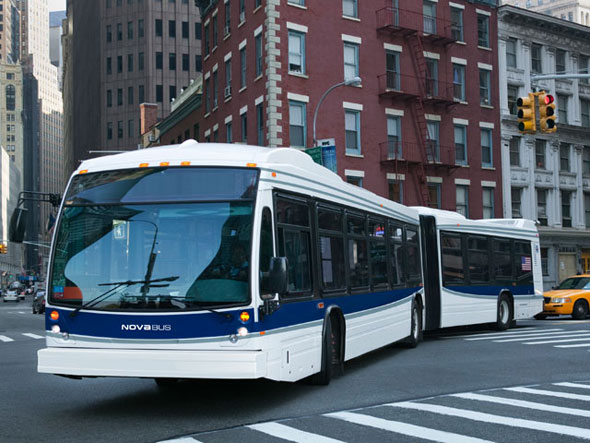 The TTC has tried articulated buses in the past with a small fleet of poorly-welded Hungarian vehicles that had an unfortunate tendency to corrode from the inside out. The last one was retired in 2003. These new, hopefully better-constructed vehicles are unlikely to make it faster to ride busier routes, though. NOW reports the high-capacity LFS Artics will run slightly further apart, saving the TTC roughly $1 million a year.

According to TTC spokesperson Brad Ross, the funds for another 126 of the vehicles are part of the TTC's as yet unapproved 2013 capital budget. As for bonus features, which Nova, a division of Volvo, offers on the Artics, the pickings will be rather slim. Ross says there won't be any "rock star tour bus-like accoutrements" such as folding tables and reading lights but there will be under-seat lighting in wheelchair areas and a city standard bike rack.

As per a 2008 decision, the TTC hasn't ordered the hybrid model because of battery problems on its existing buses.

The first fleet could become a stop-gap measure before LRT lines arrive in various parts of the city later this decade. A September Atlantic Cities post cited a study that connects increased transit ridership on lines served by rapid bus transit that later switch to light rail. Could these buses be the first step toward more riders in the long-run? What are your thoughts on the future of TTC surface transit?