That time when TV stations signed off

Not all that long ago, late night television viewing was a lonely, desolate experience. After midnight the majority of broadcasters in both Canada and the United States essentially told viewers to go to bed, turned off their transmitters and went off the air, only to resume transmission early the next morning.

This act of signing off was celebrated nightly with much pomp and patriotic fanfare, firstly with a station identification and technical specs often accompanied by serene visuals, followed by a stirring short film featuring the national anthem. For some channels, a religious or positive lifestyle message or PSA proceeded the national anthem, which was then followed by colour bars, and finally, static. 1982's horror classic Poltergeist acts as a sublime Polaroid snap of that era, capturing the popular past time of falling asleep in front of the TV only to be awoken by the final bars of the national anthem, or the eerie droning hum of 400hz.

Seeing, hearing and singing "O Canada" was a daily part of life back then, and perhaps the best known rendition of it was "With Glowing Hearts", a short composed of many clips gleaned from the National Film Board and released nationwide in 1979. 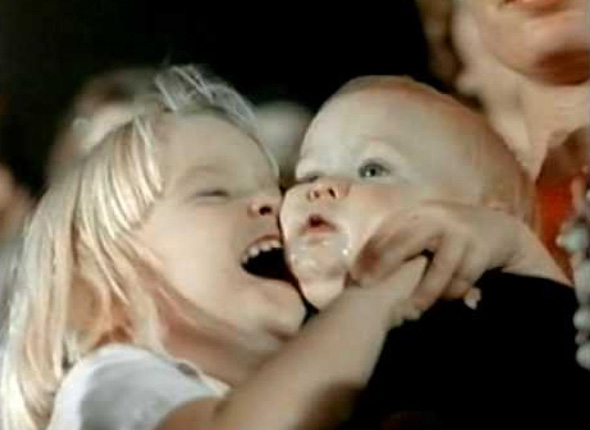 "With Glowing Hearts" was also screened before most Hollywood films in theatres across the country in the early 1980s as audiences stood and removed their hats. Many U.S. TV stations on the border would also show an "O Canada" film after "Star Spangled Banner," and some of them were even nicer than our own home grown variety.

Before the bean counting led egg headed broadcast monopolies sucked much of the creative lifeblood out of the industry, most TV stations had their own unique look and style of signing off: CFTO Channel 9 in Toronto used stylish music like a groovy "Killing Me Softly" cover, and later Electric Light Orchestra's dreamlike ambient sound scape "The Whale," seemingly at odds with their upfront and rather square religious messaging. They also ran "God Save the Queen" before "O Canada," tying the whole package together with a classy bow of Commonwealth class.

Public broadcaster TVOntario originally featured a sign off showing boffins at work in their master control room (including the late great voice of TVOntario, John DeLazzer who famously intoned "good night, et bonne soirĂŠe" every sign off), before switching to a rather boring and uninspiring list of their transponders (although viewers might get a chuckle out of some of the towns mentioned - see Emo, Ontario).

Jingle master Tommy Ambrose is the undisputed king of Toronto sign off lullaby culture: as mentioned here, Ambrose was hired by Moses Znaimer to compose the CityTV sign off theme. He managed to follow up the amazing "People City" with an equally beautiful and melancholic "A Point of View" for Global TV, who even released a 45rpm single with many cover versions of the track (Tommy's was undisputedly the best).

By the 1990s, the idea of being off the air for any period of time at all became alien, and sign offs mostly disappeared. YTV occasionally ran their lovely PJ Aashna "O Canada" film for old time sake even though programming continued unabated before and after it. Late night schedules filled up with cheapo infomercials and sleazy 1-800 numbers on an endless loop which no doubt created helpful new revenue streams for struggling broadcasters in tricky times. Lost to time but never forgotten, the sign off is yet another Martian relic from a more innocent and unhurried age, when the idea of a thousand screaming feeds blaring away 24/7 was more of a nightmare than a dream.