Without a steering mechanism of any kind, Toronto's streetcars rely on hundreds of manual and electric points to change direction at intersections. If you've ever wondered what the guys on sidewalk with the long bars are for, read on.

I've also got a look at Canada's first Urban Umbrella now proudly protecting pedestrians at Yonge and Gould and a selection of rejected names for the Toronto Blue Jays (trust me, they picked the right one.)

The image above by Jason Cook shows the south tower of Royal Bank Plaza vanishing into low cloud. The angular, gold-tinted building was finished between 1976 and 1979 next to the Royal York Hotel at Front and Bay. The south tower is significantly taller than its twin to the north, at roughly 180 metres and 41 storeys. It's the 17th tallest building in the city and 34th in Canada.

Train going round the bend 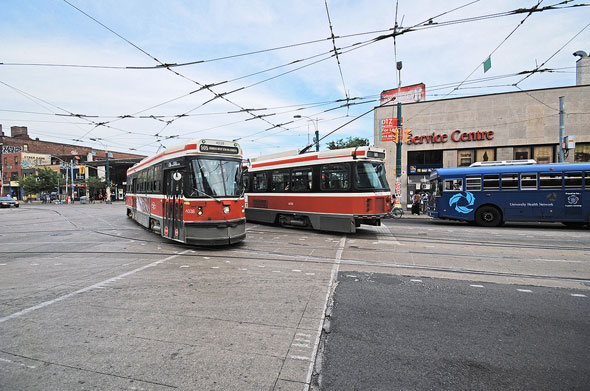 Downtown Toronto's streets are a maze of streetcar tracks and complex rail intersections. In many cases, streetcar drivers must make at least one turn from one set of tracks to another during the course of a normal route.

To that end, you may have seen TTC workers armed with long metal poles at quiet intersections waiting for streetcars to arrive. Their job, in the absence of an electronic switch, is to manually change the points so the approaching streetcar is able to change direction. The vehicles have no form of built in steering.

According to the TTC's Brad Ross, the more common electric points work thusly: "They are controlled by the streetcar operator. The switch is electrified and the operator can move the switch from the cab of the car as opposed to having to get out to manually move it with a bar." Once the streetcar has passed, the switch automatically defaults to its "dominant" position.

In the event of a switch failure, the TTC dispatches a technician to manually shift the tracks at the problem intersection with a bar. Currently, the TTC has 150 electric and 600 manual switches across the system. 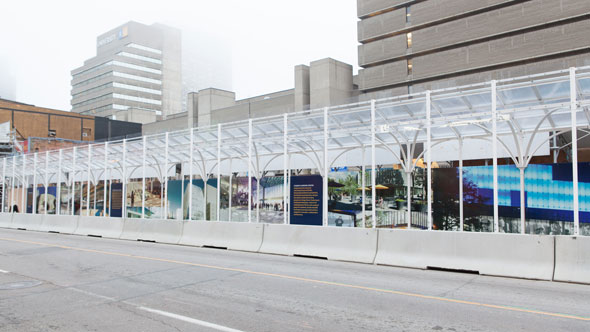 No, it's not a streetwise, wise talkin' portable rain shelter: it's actually a stylish alternative to the ubiquitous plywood pedestrian tunnels that surround scaffolding and construction sites in cities around the world

Designed in the United States and tested in New York City, the first Canadian Urban Umbrella was erected this week around the construction site of the new Ryerson Student Learning Centre at Yonge and Gould, the former location of Sam the Record Man. Here are some features of the structure:

How the Blue Jays got their name 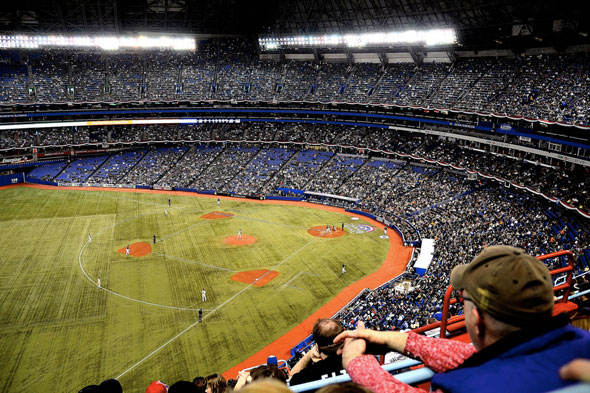 This week marked the 20th anniversary of the Blue Jays' first World Series title (yep, it's been two decades), a 4-2 series win over the Atlanta Braves. Happy days.

Back in 1976, when Toronto and Seattle were readying their brand new MLB franchises for action, the Toronto's management held a public contest to help the city engage with the fledgling squad.

According to the Leader-Post, "Blue Jays" was selected from roughly 30,000 entries by a 14-member jury consisting mainly of members of the Toronto media. Though they didn't ever reveal the 10-name shortlist, several favored choices were circulated at the time.

Here are several names that didn't make it:

"Blue Jays" was actually suggested by 154 separate people so the team's owners randomly selected a winner of the grand prizes from a hat. The "Blues" name was probably also in close contention but Ron Murphy, a U of T football coach, protested saying the name should be strictly for varsity sporting teams.

And, just because it's an awesome moment, here's Joe Carter hitting that walk off home run to retain the World Series the next year. Touch 'em all, Joe.

Images: "Wall of Gold" by cookedphotos, "Streetcar Duet" by sniderscion, Ryerson University and"take me out to the ball game" by photo baron.