Queens Quay East to get a separated bike lane

Still smarting from the loss of the Jarvis Street bike lanes, which were officially condemned at the last council meeting, Toronto's cyclists have been taking plenty on the chin lately. Well, time for some good news. At the same meeting last Tuesday, council approved an entirely new separated bike lane on Queens Quay East to be up and running in under a year.

The new, 3.2-metre bikeway will run on the south side of the waterfront street from Yonge to Lower Jarvis between the sidewalk and the kerb. From Lower Jarvis to Parliament, the existing, on-street markings will be repaired and a new painted 0.7-metre buffer zone added between car and bike areas. Disused rail tracks and other hazards for bikes will be removed at the eastern end to improve the transition to the Don Valley and Lake Shore trails. 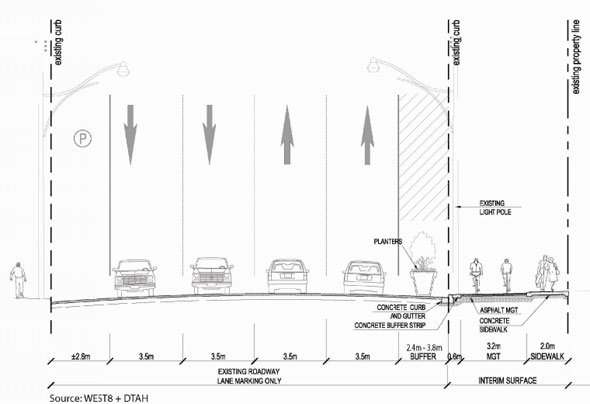 According to Daniel Egan, the city's Cycling Infrastructure and Program Manager, work is expected to start in the next few weeks now that Waterfront Toronto has awarded the $1.7 million contract to Coco Paving. The price-tag includes design, installation of both sections, and changes to the Lower Don trail connection at Parliament Street.

The new lanes form part of the major Queens Quay revitalization project currently underway west of Yonge, where a new, improved Martin Goodman Trail will be built between Bathurst and Bay streets. When complete, this portion will be connected to the rest of the path to form an uninterrupted, 3.5-kilometre bikeway on the central waterfront.

"It will feel all like one piece from Jarvis to all the way over to Dan Leckie Way," says Egan. 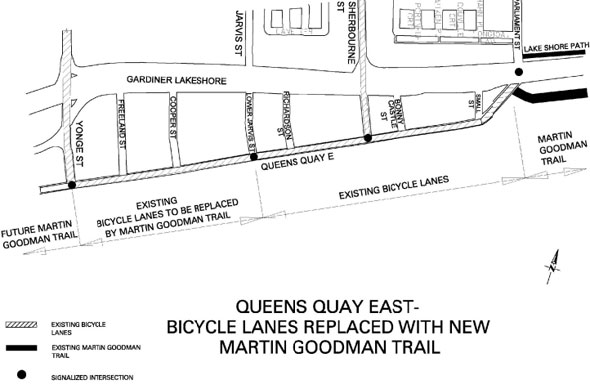 That said, these new eastern lanes will likely be tweaked in future. A planned (though unfunded) LRT line could still be built along the street within the next decade. To compensate for the uncertainty, Waterfront Toronto say they've planned the layout as far ahead as possible, though the separated section will likely need some alteration in the years ahead.

The curbside area in the separated section will also include two "build-outs" (sometimes called "bump outs") - raised pedestrian waiting areas - for improved bus access at Freeland Street and Lower Jarvis Street. Design wise, the only real downside concerns westbound riders who will have to dismount and cross at Lower Jarvis to access the new separated area.

Aesthetically, these things look pretty good on paper. The existing, shantytown painted lanes on Queens Quay east of Lower Jarvis will be removed and replaced with the maple leaf pattern shown in the rendering at the top of the page. The same pattern will be employed in the painted buffer area between east of Lower Jarvis and later elsewhere on the Martin Goodman Trail.

Do you think these new bike lanes will improve the riding experience along the eastern waterfront? Though the decisions weren't connected, is adding a new separated bikeway any compensation for the loss of the markings on Jarvis Street? Sound off below. 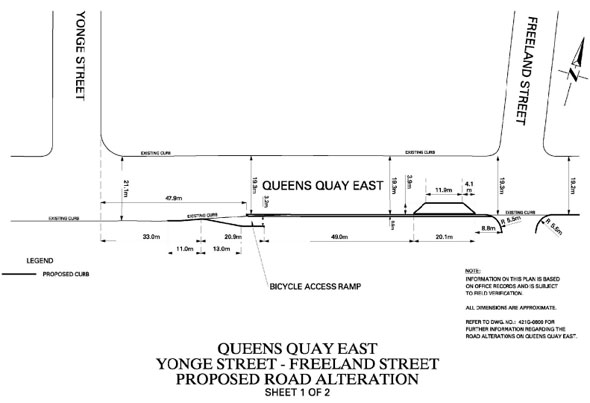 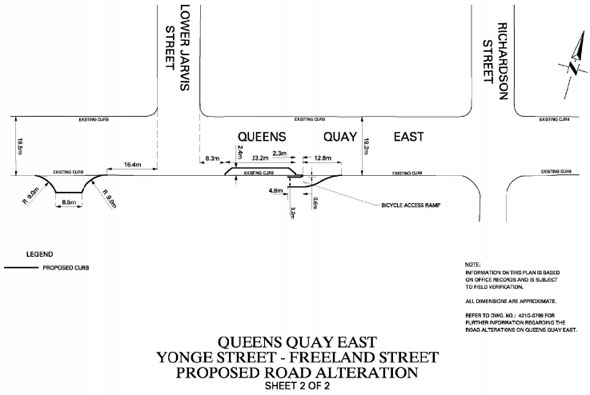