How do you spell that street name, anyway?

Call it a wolf in sheep's clothing. Riverdale's Wolfrey Avenue is recorded on every map, every chart, every city record using its conventional spelling. Yet an old blue street sign above a convenience store at Wolfrey and Broadview uses the spelling "Woolfrey." So which is it, fangs or fleece?

According to Steve Johnston from the City of Toronto, there's no record of Wolfrey having any other official spelling. Registered Plan M81, Registered Plan 15E, and City of Toronto Bylaw 4774 - the documents that created the street in several phases - all use one "o." Yet the old sign still stands without explanation.

"To the best of our knowledge, this is one of our city signs" says Johnston. The new owner of Mary's Variety and Grocery, who's only had the store two months, says he has no idea whether its real or not.

On the corner opposite the store a new white and black road sign spells the street Wolfrey, as does the streetcar shelter on the other side of Broadview. A mystery indeed. 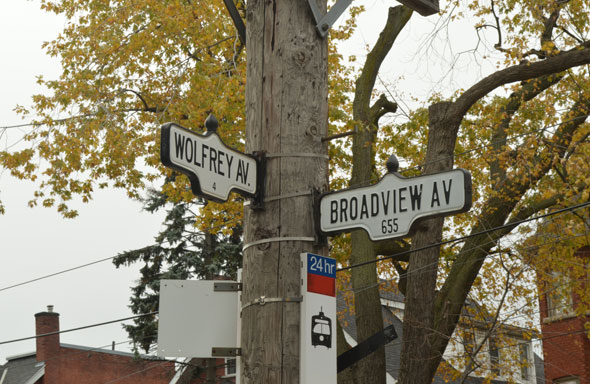 There are no official statistics on name variations in the city but the street isn't the only one to have multiple spellings. Further east near Greenwood and Danforth, Linnsmore Crescent abruptly changes to Linsmore north of Springdale Boulevard, a bizarre quirk left over from East York's amalgamation by the City of Toronto in 1998.

Residents of the southern, double "n" end of the street seem a little confused about the spelling. The Linsmore Tavern at Linnsmore and Danforth boldly declares its opinion on its large sign. Just north, Greenwood subway station uses one "n" on its local information display but two on its interior signage.

Google Maps avoids trouble by leaving the street south of Springdale blank. Street View, however, uses a single "n" throughout.

Deep in single "n" territory, residents of the old borough of East York are a little more confident. "From 1963 we are here, it's the same, no double 'n'," says an elderly resident, who asked not to be named, while proudly displaying a single "n" sign on her porch. 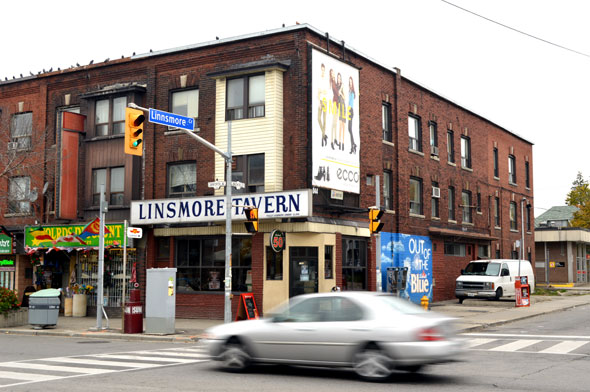 Do you know of any more streets with multiple spellings? Bloor Street is named for Joseph Bloore, a local brewer, but it's not clear how the "e" was lost. An OpenFile post from last year explores the Linnsmore-Linsmore debate further and mentions "Glebeholme Boulevard" spelled without a silent e. Add any suggestions below.