13 wacky public service announcements from the past

Old Public Service Announcements have a nasty habit of lingering in our subconscious like sweaty, half-remembered nightmares. Unsurprisingly, their pedigree can be traced back to the industrial scare films of Ottawa native Budge Crawley, who produced the first known blood soaked Driver's Ed movie Safety or Slaughter in 1958, ushering in an age of visual shock treatment where educators sought to achieve their aims through terrorizing audiences with ghastly imagery married to borderline hysterical sermonizing.

Over time this approach mellowed, and the authoritative tone was replaced by one seeking peer acceptance from the primary target - impressionable kids. In the 1980s PSAs were overrun with rapping, cartoon characters, skateboards and gaudy colours, all engineered nobly to help curb crime, alcohol and tobacco use, unsafe sex, dangerous behavior and of course the big one, drug addiction. 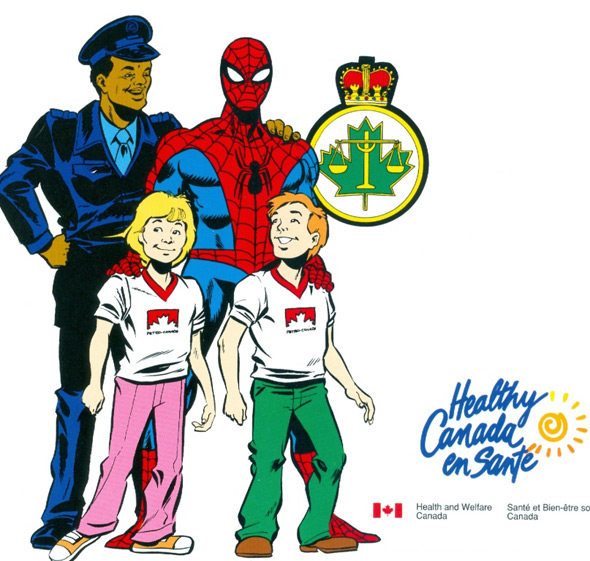 While obviously the intentions were nothing less than good natured, the content was sometimes questionable, often hectoring and in some cases could be argued had the opposite intended effect.

Here are 13 of the more memorably insane PSAs from the 1980s and 90s. Do you remember any of them?

13. "Right to Say No" (1986)
A relic of Nancy Reagan's "Just Say No" front during the 1980s War on Drugs, this obscurity remains chiseled into the psyche of those who saw it at the time probably due to its inherent contradiction - be original by doing what we tell you to do.

12. "It Can Happen Here" (1987)
While the nature of disaster depicted here is left purposely vague (Nuclear war? Earthquake? Zombie outbreak?), there is no doubt this one cruelly set out to scare the ever-loving crap out of its cereal eating demo, confused kids watching Transformers.

11. "The Cool Game" (1993)
The early 1990s saw a boom in cheap CGI and video tech, resulting in this kind of garish kid puking in a candy store attack on all senses from many commercial and music video directors. The Iwo Jima visual reference is bizarre to say the least, especially as this PSA was produced by the Federal Government who should really have known better.

9. "Say No to Drugs" (1988)
In with a swift punch to the gut courtesy of the short sharp shock school of PSA flavour favored by Law Enforcement. Sobering sloganeering and suitably scary intonation from the Voice Mark Dailey make this one almost timeless (sadly the hockey hair and stash on the morgue attendant date it '88.)

8. "All You Need is You" (1992)
Accompanied at the time by an equally sinister spot in which a butt puffing girl turns into a gigantic cigarette. Symbolism as its most opaque.

7. "One Dumb Move" (1985)
Stone cold crush classic from our next door neighbours in New York State. "Professor of the Rap" Gary Byrd was a Buffalo DJ at the time, and went on to release several non-substance abuse based tracks in the 1980s. 50,000 copies of the 7" flexi disc featuring "One Dumb Move" were released to schools, skating rinks and discos. Mixes well into Grandmaster Flash's "White Lines" we're told.

6. "Hip Choice" (1993)
Nightmarish, but for all the wrong reasons. If only all drug pushers were as creepy as the eyeless sub-Muppet "hip man" here the job of anti-drug educators would be a lot easier.

5. "Drunk Dad" (1984)
Immortalized thanks to Dad's questionable drunk performance ("Suuuuuure buddy"), a ubiquitous at the time General Lee toy and some Foley problems.

4. "Eyeball Shrapnel" (1983)
Lucio Fulci inspired horror show which regularly aired on CFTO and Global in the mid-afternoon and afterschool slots, resulting in a generation of traumatized '80s kids assuming all construction sites were blood splattered death zones. This and the many other slabs of gore offered up by the Construction Safety Association of Ontario no doubt influenced the equally shocking and unforgettable Prevent-it.ca (http://www.prevent-it.ca/) PSAs from a few years ago.

3. "Don't Put It In Your Mouth" (1993)
Although squarely aimed at the junior set, it's obvious that Concerned Children's Advertisers are somewhat embarrassed at the enduring popularity of this one, hence it not being included on the official filmography at their website (not surprising the powerful "Brain" and "ReHab" are.)

2. "Joanne" (1994)
Health Canada splashed out big bucks to run this spot nationally in movie theatres after it tested incredibly well with High Schoolers in Toronto. Simple and effective, it smartly plays on teenage vanity to deliver an oft warned, oft ignored message that smoking cigarettes will eventually morph you into a wheezing, coughing, disgusting old hag.

1. "I Am Astar" (1988)
"I am Astar" transcended his humble origin and has since become a heroic cult figure for all Canadians of a certain age. In the early cash strapped days of YTV, Astar aired during almost every commercial break, sometimes upwards of 20 times daily. When it was haphazardly remade using crude CGI in the late 1990s, Astar's precarious situation was clarified ("I am Astar, a robot from Planet Danger"), somewhat demystifying the enigmatic Robot who could put his arms back on, but at the same time raising even more questions - such as what other maiming terrors may lurk on Planet Danger. Astar is still making parade appearances, and may soon be visiting a town near you.

Other than the above mentioned grisly shorts from www.prevent-it.ca , modern PSAs mostly have shifted away from scary and towards serious, focusing on more contemporary youth ills such as cyber bullying, childhood obesity and media awareness. They may be more professionally realized and realistic, but two decades from now will they foster the same kind of cult fascination that some of their nefarious predecessors have?

FRIDAY BONUS - "Michael Knight vs. Marijuana" (1985)
Another New York import, this bonkers PSA finds an overly aggressive Michael Knight being a total dick to K.I.T.T, but mostly just being furious at the use of statistics to underline the drug problem of the 1980s. His response beggars belief: "Just tell them its bad" could well be the most patronizing approach ever undertaken to address such a delicate issue. Even Knight Rider at its most absurd was more realistic than this.