Nuit Blanche is over for another year and I'm still trying to work out whether it really happened or if it was all a bizarre dream. I could swear I remember standing in a makeshift nightclub, ankle deep in paper, photocopying my hands and face. I think I was in a seance for Kurt Cobain at one point too. Anyway, there are some facts and figures on the event below.

Also, we've got some fun facts on Toronto's new fleet of streetcars, the first of which arrived from Thunder Bay earlier this week, and a classic interview with Sam "The Record Man" Sniderman who died Sunday. 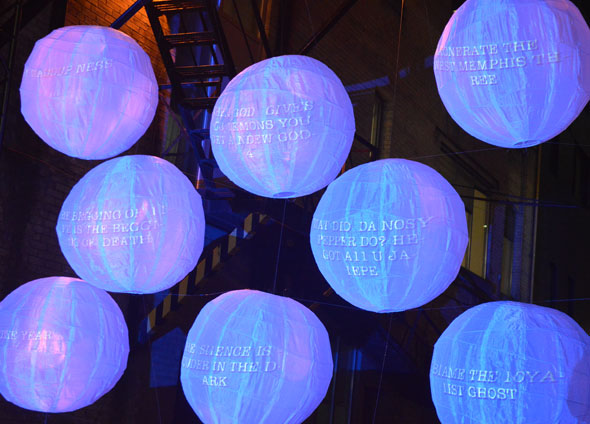 Nuit Blanche, Toronto's annual nocturnal celebration of music, film, dance and performance art, officially wrapped up for another year at sunrise this morning. The name Nuit Blanche, which literally translates as "white night," actually means "all-nighter" or "sleepless night." Our full round-up is coming tomorrow but in the mean time here are some figures from this year's event, if you're not too bleary-eyed to read them.

This year, 158 art projects by 500 homegrown, Canadian, and international artists were installed across the city. Ranging from playful interactive pieces to mournful piano recitals, the events were scattered across the city from the Distillery to the Annex and beyond. Since 2006, the event has generated more than $100 million for Toronto's economy, according to the official press release.

Last night was the first time Nuit Blanche events took place on King, Peter, and Jarvis Streets but, as in previous years, Nathan Phillips Square was the focal point for activities. According to last year's figures, one million people visited the event, including more than 120,000 tourists.

The concept of a Nuit Blanche goes back to 1989 in Nantes, France, when mayor Jean-Marc Ayrault established an all-night arts festival. The same year, Helsinki, Finland ran a similar event called Night of the Arts. Today, almost 120 cities worldwide hold an event of this type, including Montreal, Melbourne, Paris, Brussels, Rome, Madrid, Riga, Bucharest and Valletta.

The new streetcars on the block 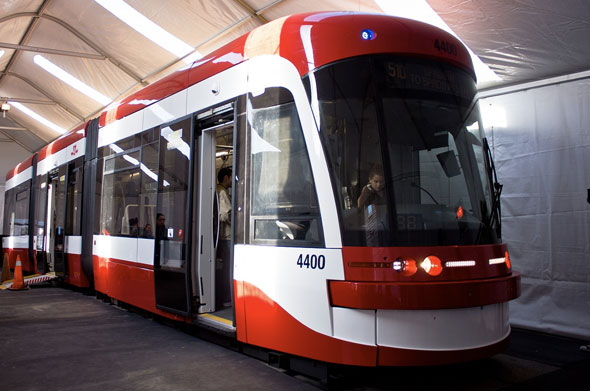 Toronto's new fleet of low floor, extra length streetcars have been in the works up at the Bombardier plant in Thunder Bay for some time. This week, eagle-eyed spotters at Breaking Projects noticed a test version of the new vehicles on a flatbed train car near St. Clair and Runnymede. The new models will enter service in the next couple of years and a media op is expected in the next few months. Until then, here's some numbers on Toronto's modified Flexity Outlook.

Perhaps the most noticeable difference between the Outlook and the current fleet of CLRVs and ALRVs is the number of articulated sections. The ALRV double-length streetcars presently in use on Queen Street and other busy routes have just one pivot point in the middle of the car; the Outlooks have four.

The Outlook is a popular design and variations are currently in use Brussels, Belgium, Stockholm, Sweden and several other cities. The track guage - the gap between the rails - is unique to Toronto (1,495 mm, wider than the standard 1,435 mm), so the Outlook had to be specially modified for use here. Wider rails allowed horse-drawn carts to travel inside the tracks and prevented steam railway locomotives using the roads, a legitimate concern when the spec was decided in the late 1800s.

The new streetcars are almost double the length of the standard CLRV streetcars at 30.20 metres but they are exactly the same width - 2.54 metres - to allow for safe passage past older models. Though they look nimble, the Outlooks are actually considerably heavier than their predecessors, weighing in at around 48,200 kg (unladen).

Perhaps the most surprising statistic about the current streetcar fleet is the estimated top speed. Both CLRVs and ALRVs are both capable of reaching a terrifying 110 km/h - highway speed. The Outlook, sadly, won't be able to do that. It's estimated to speed is a paltry 70 km/h by comparison.

Most importantly, the Outlook seats 70 and has space for up to 181 standing passengers. By comparison, the smaller CLRV streetcars seat 46 and have room for 86 straphangers. The ALRVs, the largest streetcars currently in service, have 61 seats and space for 144 others. The Outlooks are all wheelchair accessible.

Sam Sniderman, founder of the Sam the Record Man chain of stores, died this week aged 92. Though there's only one store left, in Belleville, Ontario of all places, Sam's legacy was strongest at the corner of Yonge and Gould, the home of the company's flagship Toronto store. Here's Global's Bob McAdorey interviewing the charismatic Sniderman. A memorial is planned for October.

Photos: The author and "New LRV Streetcar" by dtstuff9 in the blogTO Flickr pool.