A brief history of the Battle of Montgomery's Tavern

Postal Station K at Yonge and Montgomery stands on important ground. The land now occupied by one of Toronto's finest examples of art deco architecture used to be home to Montgomery's Tavern, the location of a historic battle in the Upper Canada Rebellion. It was here in 1837 that a collection of armed militants angered by the mechanics of British rule made their stand against loyalist soldiers.

With the sale of Postal Station K by Canada Post and the threat of condos taking over the site making headlines earlier this week I thought it was worth revisiting this key part of Toronto's (and Canada's) history.

In the early 1800s, all wasn't well in Upper Canada. Disputes over the allocation of land by the British government to members of the Anglican church had many ordinary citizens angry, mainly due to the policy's negative effect on the price of land. Many of the residents of Upper Canada felt they had no representation under colonial rule which was dominated by a privileged few, known as the Family Compact. An increasing amount of American settlers moving north into Upper Canada raised fears of republicanism developing within the province. 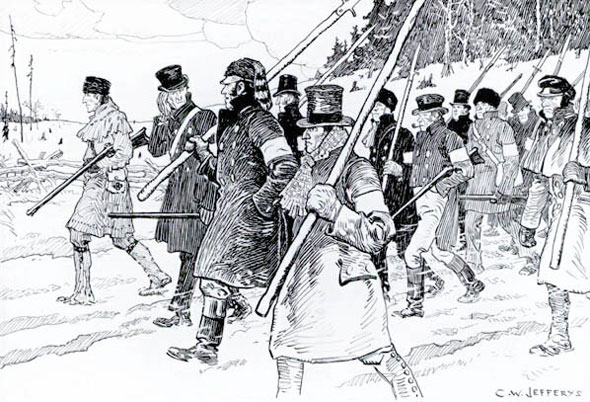 It was from this situation that William Lyon Mackenzie, a Scottish laborer and journalist, came to prominence in York with calls for a republican government. The founder of The Colonial Advocate, a newspaper that supported his views, Mackenzie had a seat on the Legislative Assembly of Upper Canada and became the first mayor of Toronto after council voted to drop York as its name.

Though his republican agenda never gained much traction and he eventually lost his positions on city council and in the legislative assembly, Mackenzie saw a chance to make his case and seize the capital when the Lower Canada Rebellion broke out in what is now Quebec in the fall of 1837. Lieutenant-Governor of Upper Canada Sir Francis Bond Head - nicknamed "Galloping Head" - dispatched troops from Toronto to help suppress the uprising.

With the city decidedly under protected, Mackenzie and his followers raided an armory and organized a march south down Yonge Street from Montgomery's Tavern, just north of Eglinton. Near today's Maitland Street, Colonel Robert Moodie, a loyalist leader, attempted to pass through the rebel roadblock in an attempt to alert Bond Head to Mackenzie's actions.

Showing a distinct lack of judgement, Moodie fired his pistol in the air to clear the path. Naturally, the rebels returned fire and swiftly dispatched Moodie and his mount. 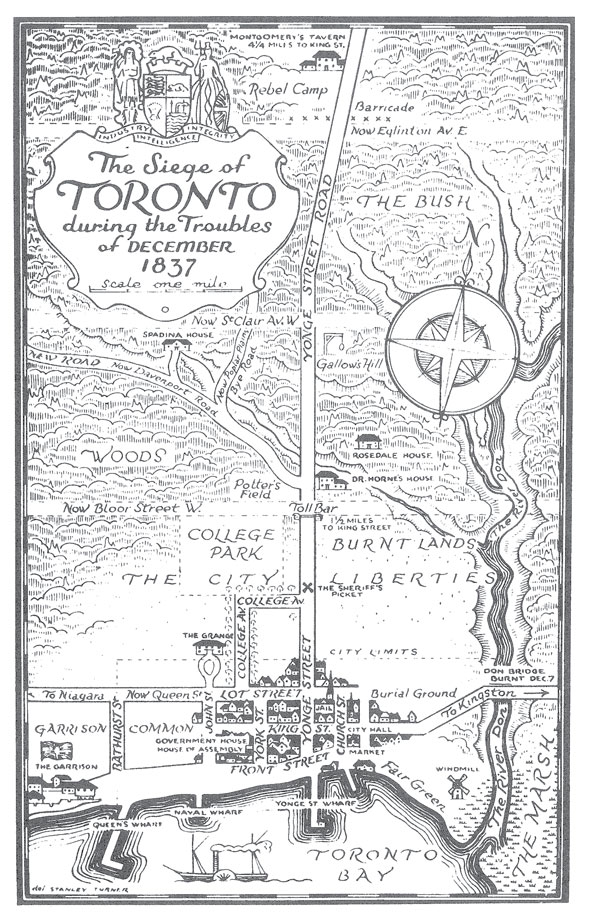 Mackenzie's troops moved south down Yonge street to city hall (then located at King and Jarvis) to acquire more weapons. Anthony Van Egmond, a close friend and ally of Mackenzie, was appointed the military leader for the rebels, apparently for his dubious claims to battle experience in the Napoleonic wars. There is also some suggestion that Mackenzie may have threatened to kill Van Egmond if he didn't comply.

Later that day, Egmond engaged a small group of 27 loyalists led by William Botsford Jarvis, cousin of Samuel Jarvis, the famous street's namesake. Jarvis, popular with the Family Compact, was the sheriff of the Home District - the now defunct sub-region that included Toronto - and the founder of the community of Yorkville with Joseph Bloore. His residence, named Rosedale by his wife Mary, gave its name to the surrounding neighbourhood.

During the brief exchange of fire, Jarvis' loyalist troops fired a volley at Egmond's gang and dropped to reload. Thinking the loyalist soldiers had been killed, Van Egmond gave the order to charge and in the ensuing melee many of the rebel soldiers fled or deserted the group. That night, loyalist reinforcements arrived from Hamilton and significantly bolstered the loyalist forces.

On December 7th, two days after the skirmish on Yonge Street, the rebels began to reform at Montgomery's Tavern in the building itself and the surrounding forest. In preparation for another battle, Egmond and Mackenzie's men convinced Peter Matthews, a rebel from Pickering, to create a diversion at the Don River. Matthews, with Samuel Lount, burnt several buildings, a bridge, and killed one person, but failed to generate the necessary confusion.

This time led by veteran soldier Lieutenant-Colonel James FitzGibbon, the loyalists moved up Yonge Street and engaged the gathered rebels at Montogmery's Tavern artillery fire, killing three. At this point, many of the unarmed and rebels scattered and regrouped inside or close to the building itself. As FitzGibbon's soldiers and militiamen moved toward the building the group dispersed completely with very little actual fighting. For good measure, Fitzgibbon's men looted and burned the tavern to the ground before returning to Toronto. 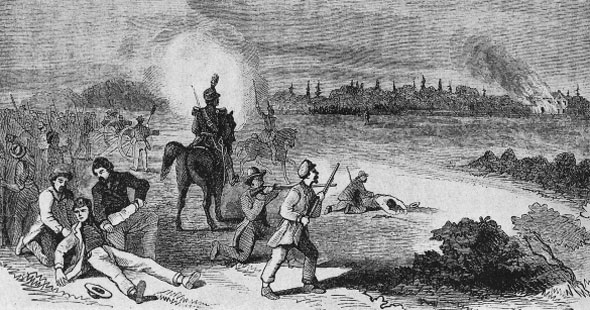 In the aftermath, Peter Matthews and Samuel Lount, the diversionary pair, were tried and hanged at the King Street Gaol for their crimes. Anthony Van Egmond was captured at Montgomery's Tavern and held in a small cell in Toronto where he developed pneumonia and suffered from malnutrition. Despite transfer to a hospital, he died in January 1838.

Mackenzie, however, fared much better. He escaped to Navy Island near Niagara and was part of another quashed uprising before quitting Canada for the United States. He would later return to the Province of Canada, as it had then become, and rejoin mainstream politics.

Post seige, the site of Montgomery's Tavern became home to a building used as a hotel, a masonic lodge and council offices for the North Toronto township before being lost to fire in 1881. A new building on the same site also saw use as a hotel before being acquired for a postal office. The office was demolished in the 1930s and replaced with the art deco structure present today.

Due to short reign of Edward VIII, Postal Station K is one of very few buildings to bear the royal cypher EVIIIR, short for Edward VIII Rex. Its loss would be an architectural blow and may jeopardise an important yet neglected historic site.