What will become of the Port Lands?

Back in September 2011 Toronto dodged a bullet when city council unanimously opposed a half-baked plan from Doug Ford & Co. to high-jack Waterfront Toronto's plans for the Port Lands. Most of us who care about the area's future breathed a collective sigh of relief when the tourist-focused plan galvanized a council that up until that point seemed unaware of its own power. There would be no Ferris wheel and mega-mall coming to Cherry Street.

Fast forward to today, however, and the plan for the Port Lands is a bit more hazy. While Waterfront Toronto has the reins, there's plenty of reason to doubt that one of the original defining features of the redevelopment scheme is in danger. Although the Ford plan was put on ice, the subsequent agreement to entertain options for accelerated development of the area has surely put the initial masterplan outlined by Michael Van Valkenburgh Associates in jeopardy. 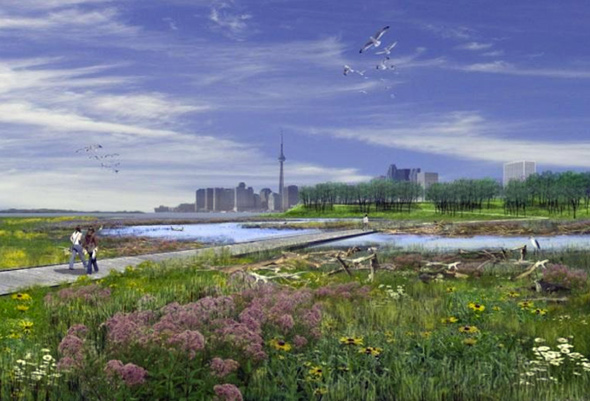 Architect and urban planner Ken Greenberg — who worked on the initial plan — has been talking about this for a while, but a recent article in the Architect's Newspaper has it back on my mind. Key to the Valkenburgh plan, you wil recall, is the re-naturalization of the mouth of Don River along with the injection significant amounts of parkland in the river's floodplain.

Although the modified masterplan has yet to be released — it's due in the fall — pressure to fast-track development and a general lack of public funds could derail what was once the highlight of the redevelopment proposal. It's important not to get ahead of one's self here. Perhaps the new plan will, in fact, retain much of original. But should fears of "value-engineering" be well-founded, that would represent a failure to capitalize on a major opportunity.

The Port Lands is something of a blank canvas, and Toronto should be judged on what it paints. While funding for an accelerated project will no doubt prove challenging to secure, can we please do our best to avoid another cookie-cutter community built according to the whims of developers rather than bonafide planners?