The sinking of the steamer Alexandria in Toronto

The Mississippi might be the spiritual home of the steamboat, but Lake Ontario and Canada in general have seen their fair share of paddlewheels and boilers. In fact, the vessels were integral in the development of the western provinces, transporting passengers and goods up and down the navigable rivers of British Columbia, Alberta, Saskatchewan, and Manitoba, and even venturing into the Yukon.

One such Canadian steamer, the Alexendria, built at Hull, Quebec in 1866, came to a spectacular demise at the foot of the Scarborough Bluffs one tempestuous night in August 1915 on its way to Toronto from Port Hope. The wreck still sits in the same place almost 100 years later, serving as a reminder that even the usually placid Lake Ontario can still deliver a nasty bite. 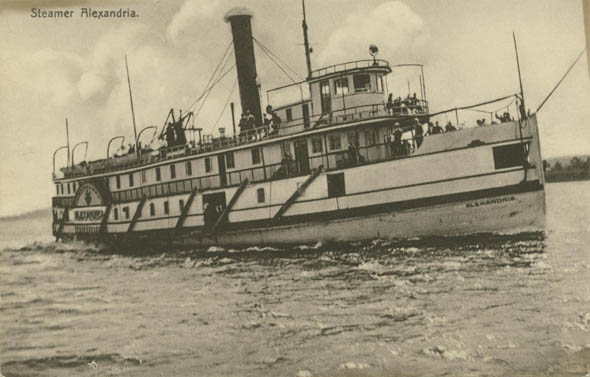 According to a 1975 story in the Picton Gazette by Willis Metcalf, the Alexandria or "Alex" to those familiar with the vessel, was registered at "173.7 feet in length, 30.6 feet in breadth, and 8.4 feet in depth." It weighed 508 tons. Primarily used as a passenger steamer servicing towns along the north shore of Lake Ontario and occasionally making a run over to Rochester, N.Y., the Alexandria became the property of Canada Steamship Lines, the owners of several other famous vessels including the Noronic, after a merger with Hepburn Brothers of Picton.

Built as a freighter, the Alexandria had its first passenger decks added in Montreal. It was a regular visitor to the harbour at Picton, Prince Edward County, where it was lengthened by thirty feet to accommodate additional passengers on the Rochester-Quebec and Brighton-Montreal runs. The picture above shows the vessel before its final modifications.

On the night of August 3, 1915, the Alexandria was bound for Toronto from Montreal carrying 300 tons of vinegar, beans and tomatoes. A small crew - captain William Bloomfield, wheelsman Frank Twaddle, Sam Schriver, Alex Boy and several others - fed the engine and navigated the shoreline of the lake. Prior to the journey, the ship had once again undergone extensive modifications - it's seats and other passenger equipment removed - to transport cargo. 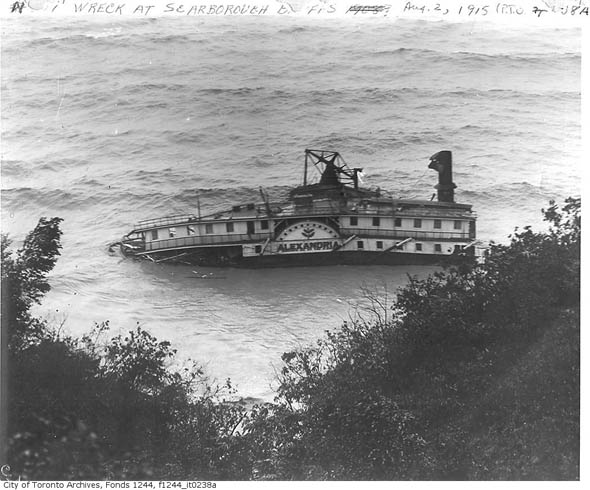 Heading west beyond Port Hope, the Alexandria encountered an increasingly strong northerly wind and large rolling waves tossing the vessel from side to side, toward the shore. In response, captain Bloomfield worked hard to keep the steamer away from the perilous rocky shore while maintaining forward momentum in the hope of weathering the worst of the wind and rain.

The situation became increasingly dire approaching the foot of the Scarborough Bluffs and the Alexandria was blown dangerously close to the shore. Despite its engines working at full power, the ship ran aground in the shallow water broadside to the wind. Immediately, waves began to crash over the lower decks and captain Bloomfield ordered the crew to release distress signals.

According to newspaper reports, "scores" of farmers and radial railway workers arrived at the top of the fifty-foot cliff, blocked by the prospect treacherous scramble down to the shore. The breakers - already capsizing the Alexandria - were too high to launch a vessel close by so rescuers from a nearby life saving station in Toronto were mobilized. By the time the first boats arrived, the impromptu party had reached the bottom of the cliff and begun forming a human chain into the water to help pull the crew of the ship to safety.

As the hull rapidly began to break apart, the crew pulled on lifejackets and leapt into the roiling water. 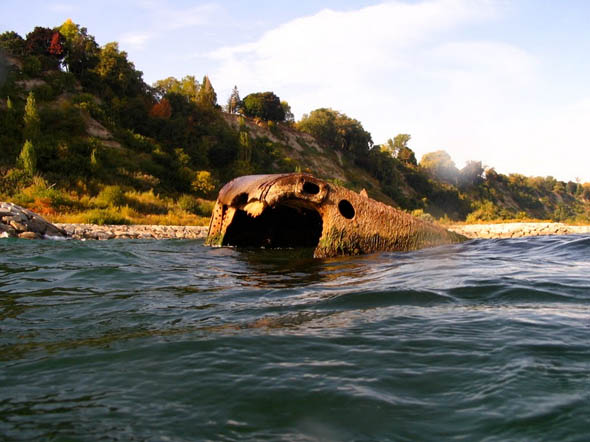 Tossed about by the waves, the human chain snatched up the crew and heaved them to shore. Up on the Bluffs, the aptly named Mrs. Crew of the Half Way House inn prepared beds and a fire for the soaked, cold but otherwise uninjured sailors. With everyone safely out of the water, the crew were taken to Toronto - ruining Mrs. Crew's chance at a quick buck.

The next day, with the lake considerably calmer, nefarious locals set about salvaging anything they could from the stricken Alexandria. To quote a newspaper report, "a persistent stream of the curious and thrifty went back and forth from the Bluffs bearing trophies of every conceivable nature. Nearly everything of value above the water line was taken. Many a cellar was stocked with vinegar and canned goods."

Perhaps as a result of the rampant looting, the Alexandria was never properly salvaged. The hull of the ship still sits a few metres off shore and is easy to see from land (it's even visible on Google Maps' aerial view.) Scarborough-based diver Mike McAllister has extensively explored and photographed the wreck; his photograph of the rusting hull is shown above. Other pictures from the site are below. 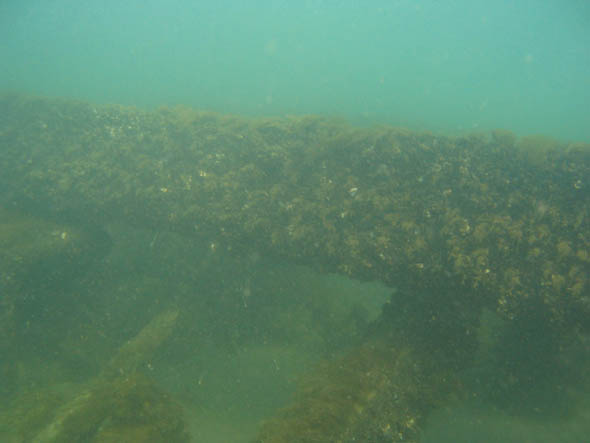 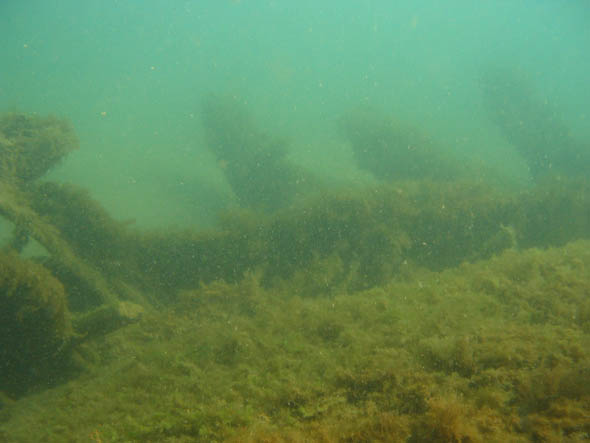 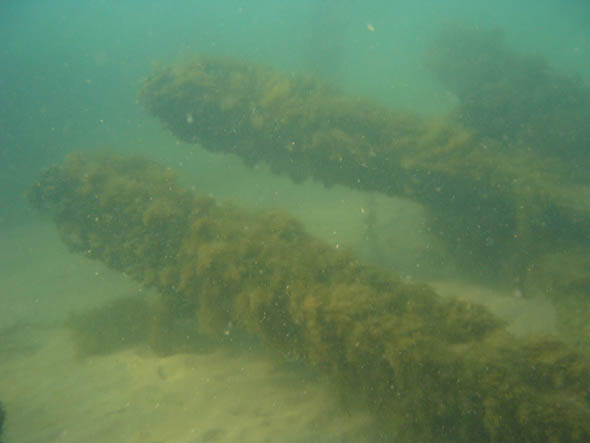