The Brant Park is the newest Lamb Development condo brainchild. (You all know Brad, right?) Slated for Adelaide and Brant street, this to-be-constructed nod to 1960's architecture will offer a range of suites, from one-bedrooms to two-level penthouses, with the area acting as the condo's main amenity. The structure itself is certainly a divergence from those glass-shedding towers of Toronto's downtown (so too are the standard glass stoves in each suite), but a closer look should reveal if this ode to the past presents a promising future for would-be condo owners. 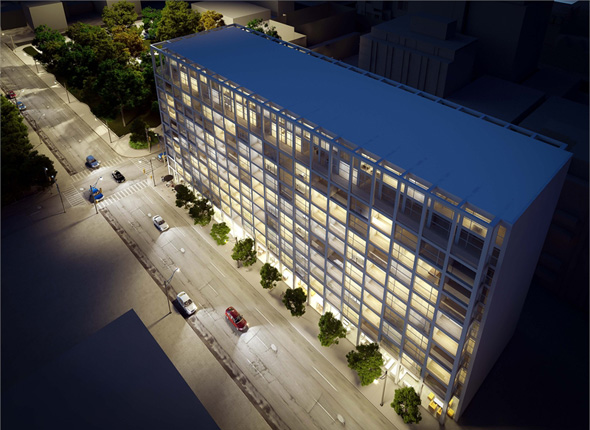 I don't have a "Wavering" heading, so I'll just put this here. While it's nice to see a change from the big glass towers that are taking over Toronto's downtown, I suspect armchair urban planners (myself included) will be torn when it comes to judging the aesthetic of this new structure. Supposedly inspired by 1960's modernist architecture, The Brant Park is intended to complement other mid-century structures in the area. Personally, I'm not a fan of it. While retro can work, I think Brant just looks dated; more a forgotten 1970s-era apartment complex at Lawrence and Keele (no hate, Lawrence West, I swear), than a new urban condo in the hear of the Fashion District. But that's just me.

On to the clear Brant Park boons. If you like bustle, the location is a great one. You're far enough west to avoid the bulk of the neon mini dresses and excessive hair styling of the Entertainment District, while not too far over as to remove yourself from the action. The Brant Part is right between some great cafes and bars up on Queen, as well as super eats down on King (and if you must, clubs over on Richmond). Best of all, the building will be directly across the street from St. Andrew's Playground park, which is a definite plus for condo pet parents who want an off-leash area close to home. 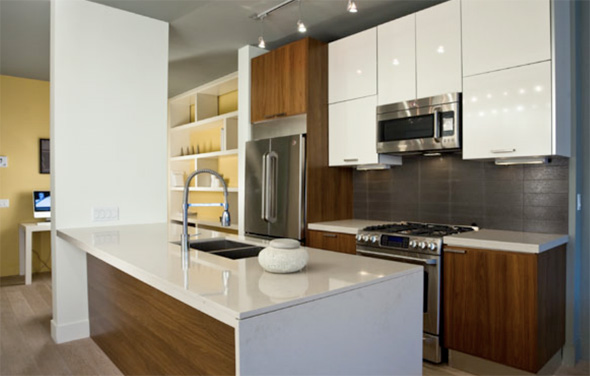 As for the units themselves, while size might be an issue for some (but more about that later), many Brant Park units boast a most redeeming quality: function kitchen layouts! I've been waiting for this one. While there are still a few suites with the much-loathed wall of appliances (the "kitchen"), there are many others with more practical designs.

Some kitchens are designed as corridors with breakfast bars, other come with islands, and others, still, are somewhat of lineup of appliances, but arranged on a corner as to offer more counter space. This is progress! (Or a regression back to a time when condos were designed with actual cooking in mind. I'm not sure.) Combine that with a barbeque-ready terrace or balcony, and The Brant Park has certainly got something on.

And a note about maintenance. While we all know monthly rates start out artificially low, The Brant Park seems to have kept extra amenities to a minimum. So unless builders spring for a last-minute infinity pool or spa rooftop terrace, buyers probably won't see their rates rise with the same ferocity as their condo-owning neighbours. 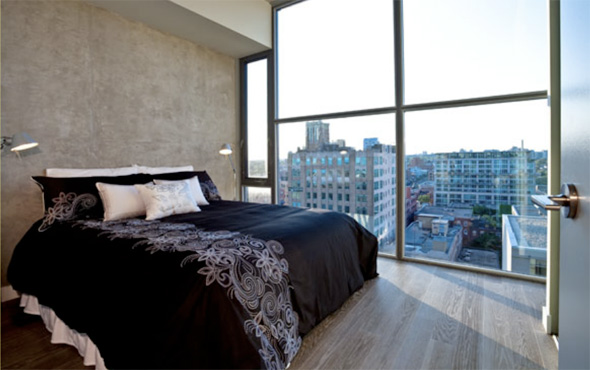 Is wide over tall necessarily a good thing? This project has swallowed up a whole block of Adelaide, with renderings showing the building a full 20 bays long. So back to my armchair urban planner analysis: when a single structure absorbs a complete city block, it doesn't offer a whole lot in the way of character to the sidewalk. Even if the building includes varied at-grade retail. The block will look uniform and in my opinion, uninspired.

Now, back to unit sizes. The smallest units at The Brant Park, dubbed "One Bedrooms," scantly measure in at 400 square feet. Call me old-fashioned, but I like my bedroom to have four complete walls. And my one-bedroom suite to fit more than one person, on occasion. These teensy units seem to offer neither. The "bedrooms" on these floor plans appear more sleeping "nooks," and 400 square feet seems more typical of sizing for a Bachelor apartment.

So, while I certainly can't call myself an expert on the rules that regulate suite classifications, it's clear to me that these "One Bedrooms" are "Junior One Bedrooms" at best, or "Studio" suites when you cut through the semantics. Nice try, Brad Lamb. Call them what you want, but for a semi-comfortable one bedroom unit at The Brant Park (i.e. more than 500 square feet) you're looking at paying in the mid 300's. So don't let that starting price fool you.. 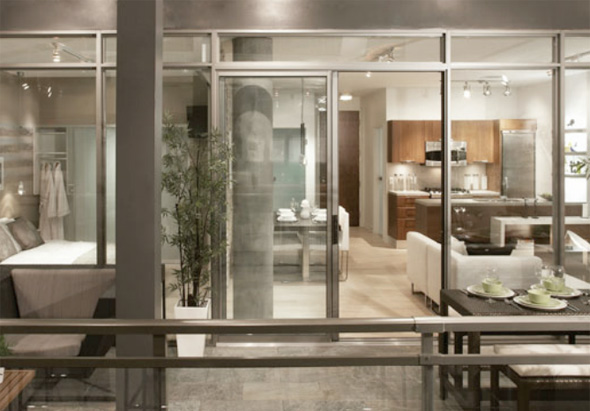 If you can spring for an appropriately sized unit (or drop a cool $900k for a two-level penthouse, whatever), The Brant Park might offer a good option for downtown condo-seekers. The layouts are livable, the location is close to everything, and the limited amenities suggest that maintenance fees may remain (somewhat) manageable. That's all good, of course, as long as you can live in a building without its own yoga studio, as well as stand its exterior facade.