Batman ad creep is a bit of a bummer

Without realizing it, you might have taken Bruce Wayne Manor or Gotham City Boulevard to work today thanks to some strategic marketing work by Warner Bros. Canada. Two official-looking Batman branded street signs appeared last week at two downtown intersections, renaming (or perhaps subtitling) King and York streets in honour of the caped crusader ahead of the release of The Dark Knight Rises, the latest movie in the lucrative franchise.

Warner Bros. confirmed it received permission to install the signs on King and Front streets — something it did before for the final Harry Potter movie — as part of the promotional work for its summer blockbuster. Fans of the movie are supposed to send photographs of the signs to a local radio station in the hopes of winning tickets to an advanced screening and promotional masquerade ball.

The signs are set to come down on July 20, but in the meantime is this really appropriate use of public space? There's enough ad creep in the city as it is, what with the new info pillars giving over substantial space to advertisers, streetcars wrapped in full banners, and the hideous idea of selling sponsorship rights to subway stations that surfaced last year. 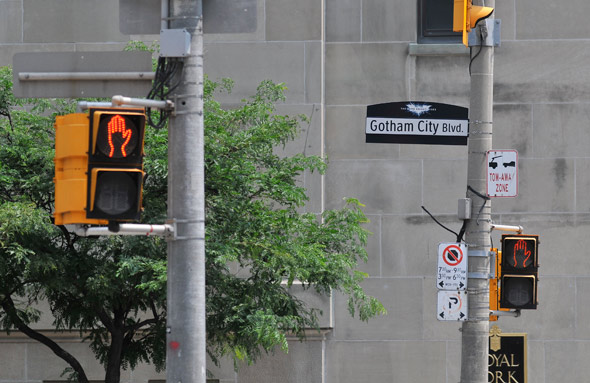 It's also worth noting that these signs were manufactured and installed — for a fee — by the City of Toronto. Even though Warner Bros. were invoiced for the full amount, is this a service we should be offering to anyone with enough cash? The precedence this sets, — at least in theory — is that companies with big enough budgets have the city's blessing to brand our streets in accordance with whatever product they're selling.

So, at the risk of sounding completely joyless over a couple of crafty signs for a movie that I'm actually quite excited about, I wonder if we should be rethinking the type of ads we allow in Toronto? A few years back, the citizens of Sao Paulo, Brazil deep-sixed almost all outdoor advertising on their city's streets. It's obviously unrealistic to suggest we do the same — we pocket cash from the billboard tax after all — but maybe we should stop short of co-opting our street signs for marketing purposes?