Behind the boarding at the Canada Linseed Oil Factory

The Canada Linseed Oil Factory has stood on Wabash Avenue for about a century, and for nearly half of its lengthy existence it has been abandoned. The hulking shell of a former industrial complex sits at Sorauren Park, silently calling out to all urban explorers and curious adventurers. The building's ominous presence is a testament to Toronto's diminished and now largely forgotten industrial past.

The factory equipment that once inhabited this building has long-since been removed and replaced with graffiti, debris, and people like me who mill about the space admiring a tangible piece of history. 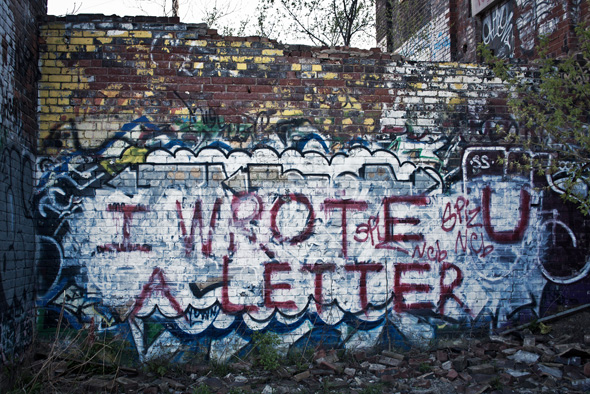 As we walked through the factory's back yard littered with broken hockey sticks, empty bottles, and a few bicycles, we approached the building itself and were greeted by an absurdly creepy figure: a pink, plush bunny rabbit hanging off the wall with half of its stuffing leaking out a wound in its side. Undeterred, we easily located the makeshift entrance through which inquisitive travellers access a not-so-stable wooden ladder down to the dark, chilly basement of the factory. 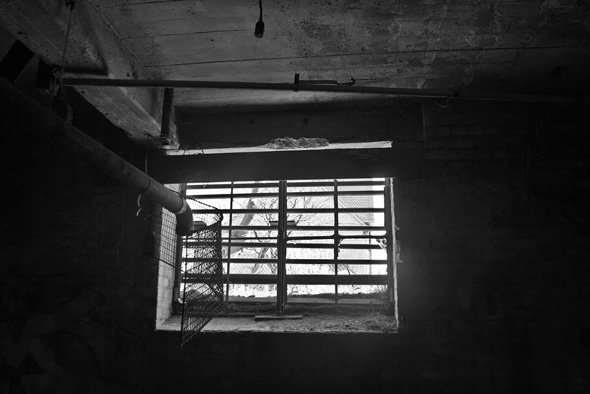 Once inside, we perceived the companion of the rodent sentry outside, a blue bunny rabbit lying supine next to one of the many puddles in the building. I was glad to be wearing my work boots. We entered through what was a window, and looking around the interior I tried to conjure up a sense of what the factory would have been like when it was operational. This was easy enough to do in parts, looking at doors, ramps and hallways and such. And yet, most of the rooms are big empty spaces that, after the thrill of being in an unknown and abandoned building wears off, aren't exactly enthralling.

The main attraction would have to be the graffiti, which adorns much of the building, both inside and out. One of the less artistic examples was a sentence stating, "once yr in you can't get out". A statement that doubtlessly adds to the atmosphere, but is nonetheless patently untrue as exiting the building proved easier than entering. 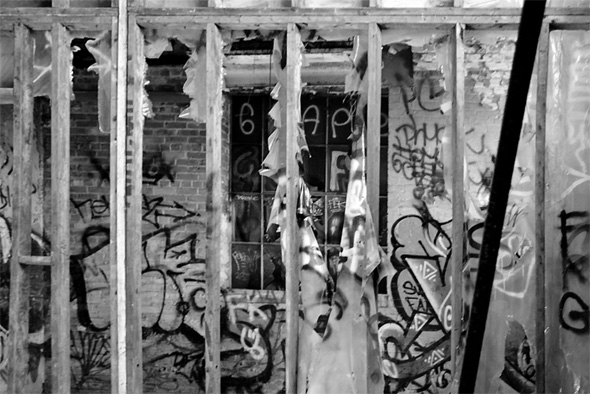 I would still love to know how exactly these graffiti artists (or vandals, depending on your point of view) got to the roof and inside parts of the elevator shaft. Unfortunately, I was unable to solve that riddle. Perhaps I could have done so were I there a bit longer. We were, however, put off by another person (or people) stomping about in the factory after we had entered. I figured that anybody else who was there was probably on site for the same reason I was, but still, when you're in an abandoned factory, the imagination does have a tendency to run wild.

The factory was built in 1915 and processed linseed oil (also known as flaxseed oil). Linseed oil was a popular ingredient in such industrial products as oil-based paint, wood finisher, and linoleum (which derives its name from linseed) as well has livestock feed and cough syrups (which also often contained a tincture of cannabis, laudanum, and chloroform...they didn't mess around back then). 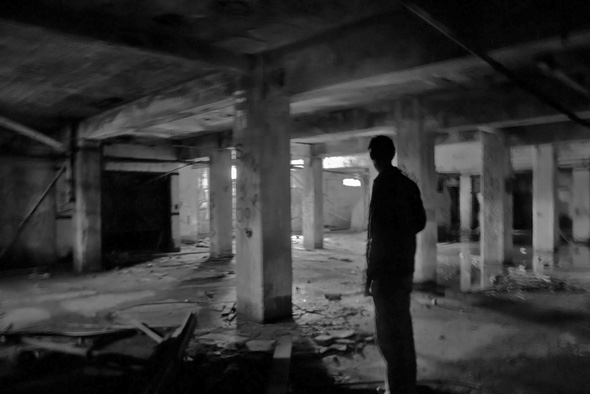 As linseed oil became less popular (perhaps due in part to its propensity for occasional spontaneous combustion) and as Toronto moved away from a manufacturing-based economy, the factory closed in the 1960s (various sources date its closure in the range of 1965-1969). Sorauren Park, which sits adjacent to the factory, used to be a barn for housing TTC busses, and the Wabash Building Society hopes for a similar reclamation for the land on which the factory sits. The City of Toronto purchased the land for $2 million in 2000.

While original plans suggested that the city wanted to convert the building as it stands, a 2009 report suggests that parts of the building would need to be torn down. Given the city's negative cash flow situation at the moment, I'm not sure if revamping the Linseed factory into some manner of community centre constitutes "respecting the taxpayer," so if you're interested in checking this place out, it'll probably remain abandoned for the foreseeable future.