Four historic properties at 297, 303, 309 and 311 George Street are a step closer to heritage status after Toronto and East York Community Council approved its intention to designate the properties under the Ontario Heritage Act. If finalized, heritage status will give the buildings more - though not absolute - protection from demolition and major alterations.

At present, all the buildings stand in various status of dereliction on the east side of George Street between Dundas and Gerrard. As if that wasn't enough, the oldest property, number 295, was recently ravaged by an arson attack. Charred wooden interior features, building material and other debris are strewn across the fenced-off front yard.

The other homes are either boarded up or looking worse for wear. A cursory examination of the situation from the laneway behind the properties suggests there could be people living inside despite the grim conditions.

Councillor Kristyn Wong-Tam, a former George Street resident whose ward covers the buildings, was integral in initiating the pending heritage status application. "I'd always thought of them as very lovely properties just not in very great shape," recalls Wong-Tam. "I was always operating with the assumption these properties were already protected under the inventory of Toronto's heritage properties. I was mistaken. When the fire took place [at 295] I was notified the properties were not protected and I thought 'we need to take care of that right away.'" 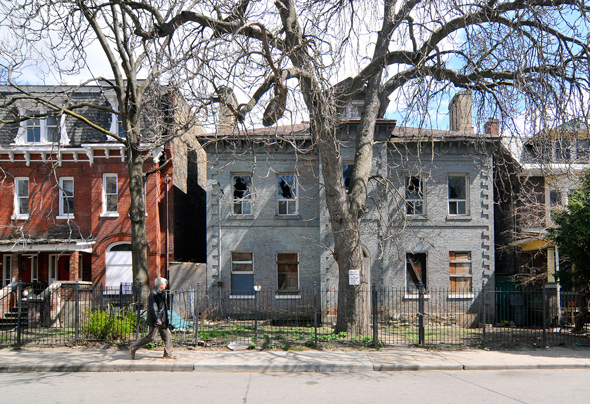 "Having that in the back of my mind when I got elected, I thought if there's an opportunity here to repurpose and revitalise this neighbourhood, one of [its] biggest assets is this amazing collection of heritage properties."

The fire was the most recent in a series of defining events at 295 George Street. Built around 1853, the property served as rented accommodation until it was purchased along with the number 297 by William Gooderham Jr., the son of the founder of Gooderham and Worts distillery, who converted it into a boarding house for impoverished British boys sent to live in Canada.

The home then passed between owners, becoming increasingly decrepit over the decades until it made headlines in 2006 for a bizarre incident where roughly a hundred decomposing sheep carcasses were discovered inside. Botched and eventually abandoned roof renovations left the upper floors exposed to the elements for several years.

When 295 was turned into a boarding house, 297 was leased as a Salvation Army rest home and it remained the property of the protestant church until 1946. Although it's currently painted blue, the exterior of the building is actually red brick. The home's three-bay facade and gable roof once matched its neighbour to the south but alterations to the latter property in the late 18th and early 19th century disconnected the pair in terms of appearance. 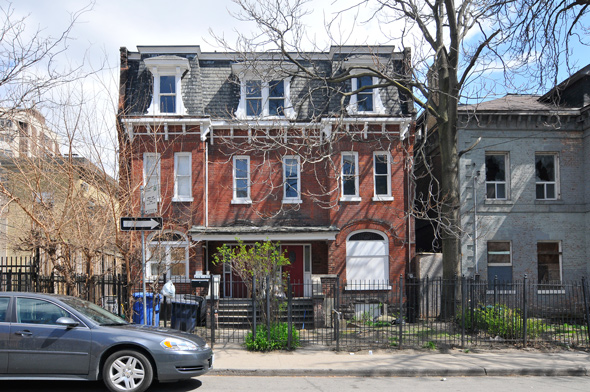 Separated from 295 by a boxy mid-70s building is 303 George Street - also known as the Frank Beecroft Houses - constructed in 1912. The semi-detached buildings are also in a pretty miserable state today; once rooming houses, the brick, wood and stone structure is a great example of Edwardian Classicism architecture.

309 and 311 - collectively called the Robert Armstrong houses - are a pair of second empire semi-detached homes beside the Seaton House homeless shelter. Built in 1887, these buildings appear to be in slightly better condition than some of its neighbours. The buildings were adapted as boarding houses after the second world war.

This group of historic properties represent a vital but shamefully neglected link to the city's past. It's easy to believe these buildings could have been restored and preserved much earlier if they were in a higher-income neighbourhood without as many of the social problems commonly found around George Street. Even with heritage protection, the owners of the buildings are not obliged to renovate or restore the properties. Let's hope these unique structures don't become yet more victims of demolition by neglect.