Waterfront planning woes date back to 1818 in Toronto

Like all soured romances, Toronto's dysfunctional relationship with its waterfront started out with nothing but love and good intentions. When Upper Canada's first lieutenant-govenor John Graves Simcoe first arrived on York's tree-lined shores, he envisioned a public park - later known as the Walks and Gardens - to preserve the area's natural beauty for the enjoyment of the town's citizens.

Fast forward to today and - no park. Railway lines, the Gardiner and several busy streets separate most of us from the water, making Lake Ontario seem more like the Moon than an accessible body of water. We know it's there, we look at it from time to time, but it's usually lurking in the background, unnoticed.

Borne out of Simcoe's conservational desires, the Walks and Gardens Trust was established in 1818 to protect a strip of land south of Front Street (then Palace Street) between Peter and Berkeley for landscaping and development as a public park. According to historian Stephen Otto in a 2007 Spacing magazine article, two other existing parks - the Garrison reserve, then much larger, and King's Park on the west bank of the Don River - would be "bookend" the proposed Walks and Gardens. 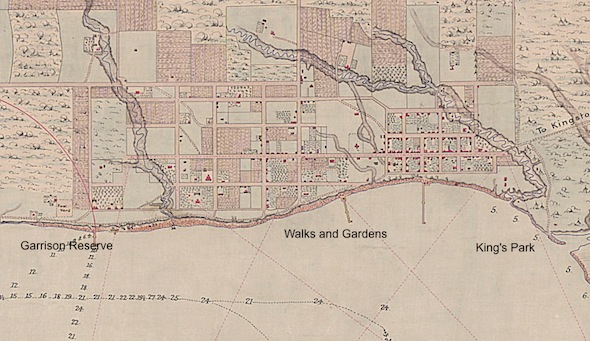 With Upper Canada's Parliament, Government House, Upper Canada College and numerous villas for neighbours, the Walks and Gardens simply needed some loving care before citizens could take a stroll in well-manicured surroundings beside the lake.

Unfortunately, it wasn't to be. As the Garrison reserve was gradually sold off and King's Park vanished over misguided health concerns, the Walks and Gardens project began to lose its way. Infilling and the development of industry on the shore took away the protected land's access to the water and turned it into a neglected quagmire at the back of wharfs and docks. Despite plans by city council to rescue and upgrade the land, the arrival of the railways in the 1850s put the kibosh on plans to seriously use the land for recreation. 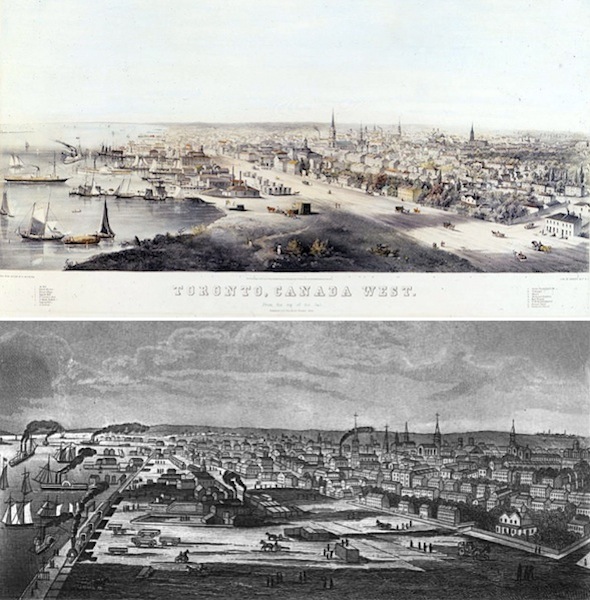 In fact, the railway companies were so determined to breach Toronto's borders they threatened to lay track down Queen Street if the city didn't give up the route south of Front Street. As the area became more industrial, the villas and government buildings began to disappear in favour of greener, less polluted pastures.

Foresighted provisions in the Walks and Gardens Trust stipulated that any proceeds generated from the sale of the proposed parkland would be used to finance other green spaces elsewhere in the city. As the land was gradually sold off, High Park and Allan Gardens were established as compensation from the revenue.

When Union Station moved from its location on Station Street to its present site in 1927, roughly a third of land for the new building belonged to the Trust and was rented by the railways. As agreed, a portion of the proceeds went to the Walks and Gardens Trust, which had been absorbed by Parks Department and lost among its finances in 1916. 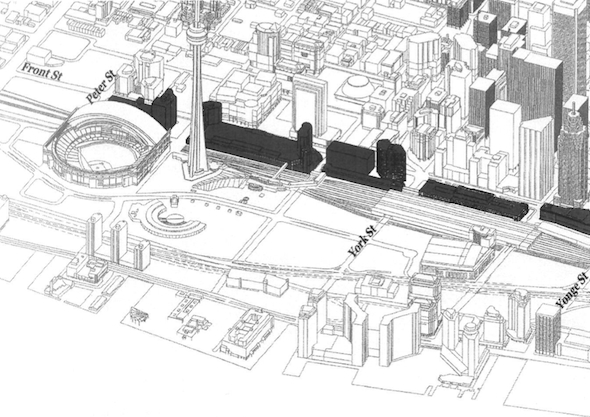 The amount of money the Trust received over the years from Union Station often fluctuated - sometimes dipping into negative figures - and was largely insignificant compared to the amount of money the Parks Department spent on maintenance and acquiring new land. Nevertheless, the revenue stream continued to sporadically flow, long forgotten, until investigated by a city council working group in 2001.

With the city's purchase of Union Station in August 2000, council is now finally working to repeal the legislation that established the Walks and Gardens Trust 194 years ago. Once approved by the province, what's left of the earliest attempt to secure Toronto's waterfront as parkland will officially be over even though the battle was lost long ago.

Thanks to Steven Otto. With information from Graeme Stuart's "History Repeats Itself" in the Winter/Spring 2007 issue of Spacing magazine. Some pictures appear in a slightly different form in the "Report on the Walks and Gardens Trust" by the Walks and Gardens Working Group dated October 31, 2001.