Despite the polls closing only minutes earlier, I had the vague sense that I was entering a victory party as I walked into the Opera House around 8:30 p.m. last night. The venue was hosting the soon-to-be bona fide victory party of NDP candidate Craig Scott, and though the Liberals wouldn't concede for another 45 minutes, the celebration, it seemed, was already underway.

The space was packed with happy button-sporters and sign-wielders, and the music blared as the results of the Toronto-Danforth byelection rolled in. Now, usually you'd expect a little more nail-biting, a little more poll-watching at such election night gatherings (especially when the candidate is a political rookie, as is the case with Scott), but there was little wariness among this crowd. Indeed, there was drinking, a little dancing, and odd chatter (as much as could be mustered over the bass), as guests discussed not if Scott would win Jack Layton's former riding, but rather, traded estimates on by just how much he would destroy his opposition. 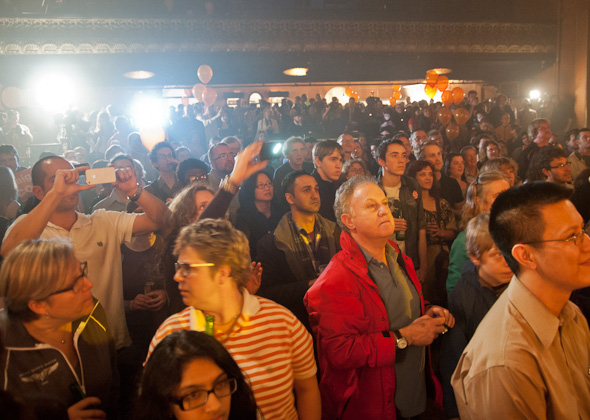 Toronto-Danforth had been Layton territory since 2004, when the late leader of the official opposition was able to break a Liberal stronghold of more than a decade and a half. The Liberal candidate for this byelection, Toronto-Danforth resident and ad-exec Grant Gordon, threw in the towel with less than 29 percent of votes and a handful of polls still to report, despite campaign efforts backed by party leader Bob Rae and MP/boxing star Justin Trudeau. The Conservative sacrificial lamb candidate, Andrew Keyes, garnered about five percent of the vote, roughly the same as the Green Party's Adriana Mugnatto-Hamu. 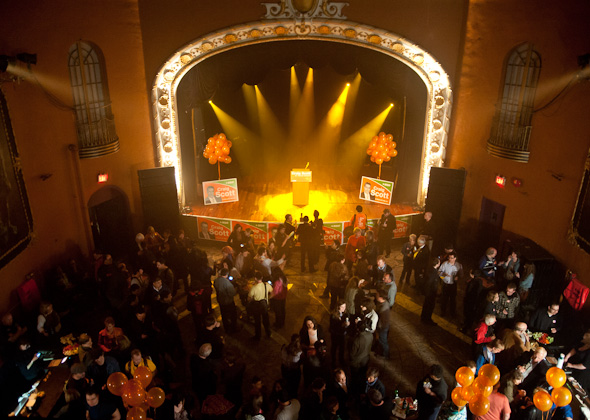 Of course, no one knew this at 8:30 p.m., but the celebration had started nonetheless with only a few posterboards in the back corner advertising the latest results. I think it says something about the aura of confidence (or else, simply about the venue's technological limitations) that the crowd didn't spend the next hour glued to a TV screen. While some have considered that the impressive NDP show the last time around was due to Jack — not the Party — I didn't hear any such skepticism last night. The supporters I spoke to echoed the assuredness of the evening, one noting that, "Craig won't do as well as Jack, but it sure looks like he'll come close." 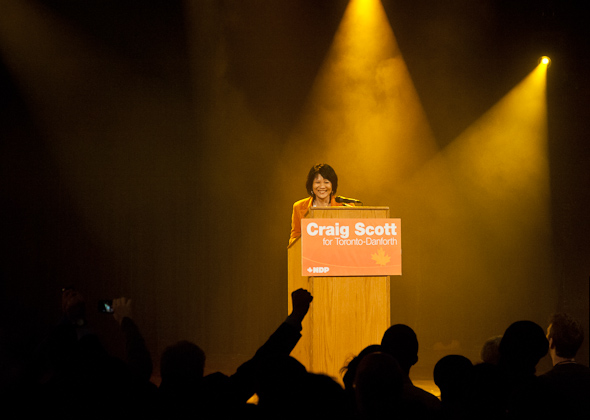 And indeed he did, taking the stage as Toronto-Danforth's new MP (an anti-climatic moment initially, as most of us learned of the official win through our smartphones) , and quickly payed heed to Jack Layton's legacy. "My friends, it looks like the orange crush is here to stay," he said to the roaring crowd, which would occasionally erupt in spontaneous "NDP" chants. "A good friend of ours would say we've chosen love, we've chosen hope and we've chosen optimism."

Scott spoke little in his victory speech of his future plans for the riding, though he has previously stated that he hopes to follow in Layton's footsteps. That means pushing for increased affordable housing for Toronto families, moving forward on human rights campaigns, and seeing through various environmental initiatives — a central issue in Toronto-Danforth. 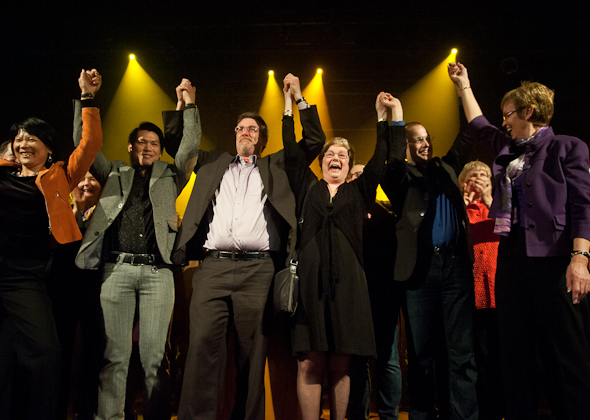 But on this night, with Olivia Chow to his side, along with his partner, mother, and Interim NDP leader Nycole Turmel, Scott simply reaffirmed the riding's NDP loyalty and vice-versa. "The people of Toronto-Danforth have put their trust in one of the strongest opposition parties in Canadian history," he said. And after promising that, "tomorrow, we have to get right back to work," Scott announced to the crowd that, tonight, "it's time to party." Funny that his announcement came an hour and a half after it had already begun.