Is the TTC ready to smarten up (on fare collection)?

In the wake of last week's robbery at Dupont Station, there has been much discussion about fare collection and station staffing. In his characteristically delicate and factually-accurate fashion, Doug Ford suggested that automated fare collection might the solution to reduce temptation to criminals. Given the Ford brothers love of unions, his statement immediately caused some confusion as to whether he was simply suggesting more fare automation or using safety as an excuse to remove staff from the stations entirely. Cue much ado.

Regardless of the Councillor's specific meaning, the topic is an interesting one given the transition the TTC finds itself in as it moves towards adopting the Presto smartcard system and starting construction on its first "real" LRT lines. These two factors will allow the TTC for the first time to seriously consider the question of whether staff should be in any kind of "station" at all and what their roles should be. As always, it can be helpful to study the world outside the 416 for some case studies and guidance.

First, the issue of smartcards. Discussed ad naseum over the past couple years, the details no longer matter. What matters is that Toronto will finally be getting one. A quick survey of major transit systems shows that most have indeed now moved towards adopting some form of smartcard. 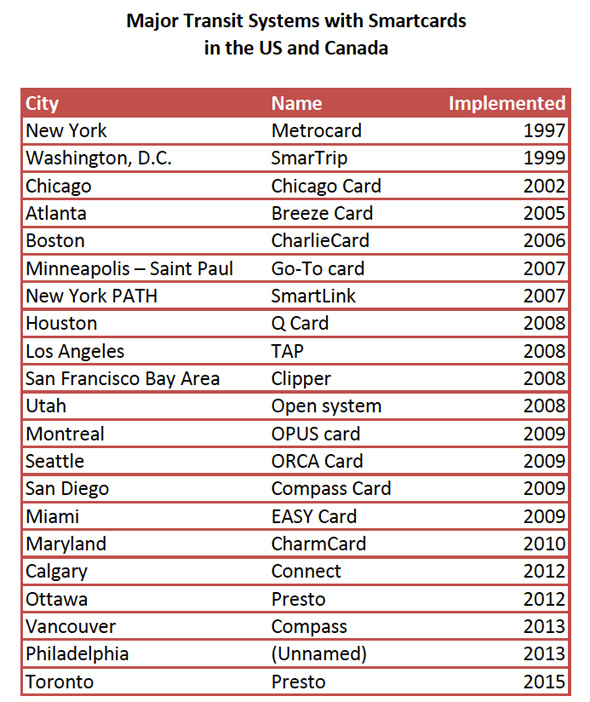 With such technology in place, whither the token clerk? Once it fully adopted its Metrocard (technically not a smartcard but an earlier generation of stored-value card) and killed the token, New York made several highly publicized attempts to reduce the number of its "token booths" and staffing levels. Though there has been some resistance, and all stations remain staffed at all times, there are many fewer clerks now in the system. Fares are still sold at booths, but most transactions have been shifted to automated vending machines, which are more numerous than booth attendants and typically have a shorter line.

Even with these changes, violent robbery attempts do still occur in New York from time to time, so why not eliminate selling tickets from the booths entirely? Several cities such as Boston, Chicago and Washington DC have gone this route, where stations remain staffed with customer service agents but all fare transactions must be conducted at the automated machines at all times.

Some smaller subway systems have taken the next step and eliminated all staff, relying not only on automated machines to sell turnstile or Proof of Payment fares but also cameras and phone stations to provide security. Notable examples include Vancouver, New York's PATH system, Philly's PATCO system and the Los Angeles Metro.

Finally, with the fares moved to machines and the staff gone, should the turnstiles disappear as well? Nearly every LRT system in the world uses Proof of Payment (POP), even for systems like Seattle, Pittsburgh or San Diego that have underground segments. However, Boston and San Fransisco do use turnstiles for their underground LRT stations and Los Angeles is now installing them. Cleveland did just the opposite in 2009, removing turnstiles from their subway stations because they already had POP in use on their connecting light rail lines. The cost of turnstiles is ultimately a calculation of equipment and maintenance weighed against likely lost revenue from fare-dodgers.

What does all of this mean for Toronto? As the smartcard table shows, the TTC has hardly been on the bleeding edge of fare collection technology or operations. The trend from peer cities seems to indicate a future of all-automated fare collection with staffed customer service attendants only where warranted (i.e. all subway stations and the interchange underground Eglinton LRT stations). With even the streetcars removing the handling of cash from drivers change is in the air. It just won't be in the token booth.