Late last year, council, in conjunction with Astral Media, started rolling out redesigned information pillars at locations around the city, purportedly to help visitors navigate the streets with maps and local information. In reality, the new pillars are large, obstructive advertising boards bolted to a pole and have proved pretty unpopular with road users and pedestrians alike — one at College and Bathurst got a make-over in January in protest. The most common complaints talk of blocked sight lines and sidewalks even though the ad space is technically an "international standard," whatever that means.

As Dylan Reid at Spacing pointed out last November, some of the new pillars were positioned in potential violation with another council directive, the Vibrant Streets Initiative, and at least 8 have since been removed as a result. As stipulated in the city's contract with Astal, a total of 120 pillars are planned — almost half of which have already been installed. 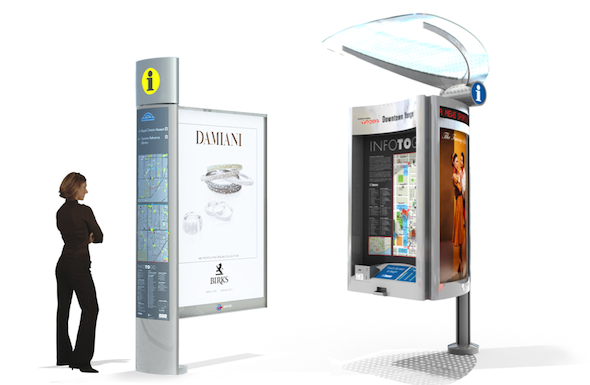 At the February meeting of the city's Design Review Panel — the group that advises council on important design issues — members discussed the problem with Elyse Parker from Transportation Services, and the minutes of that talk have just been made available. Surprise, surprise Astral Media is not interested in revising the design until at least 2017 (per the contractual agreement) but has hired IBI Group, an architectural and design consultants, to look at the sight line and obstruction issues.

Perhaps that's a glimmer of good news, but it'd be tough to fault someone for being skeptical about the prospects of real improvement here. That said, new installations are on hold and at least some of the planned pillars could be shifted to positions more suited to their size. As the DRP points out, subway stations would be ideal because they are areas where you're more likely to find tourists or people needing directions.

What are your thoughts on this? Most dislike the ad creep into public space, but they're also just ugly structures to begin with. Members of the Design Review Panel point out the fact they weren't consulted on the appearance of the current pillars and doubt those already on the street will make it to the end of their 20 year life cycle.

The DRP wants "a design that satisfies all parties, not just the ad company." Any ideas?