A lesson in heritage neglect at Church & Wellesley

It wasn't a heritage site, but the request for designation had been signed and submitted. "An enormous gap in communication," says Councillor Kristyn Wong-Tam, is what allowed the demolition of 81 Wellesley Street East to move forward — this only a few days after we were all so gushy about the restoration efforts at the former home of the Big Bop at Queen & Bathurst.

The building — buildings, actually — housed the Wellspring Cancer Support Centre for nearly 20 years. The three-storey Odette House and two-storey coach house in back were sold this past September after Wellspring announced it couldn't bear the cost of the renovations needed to maintain the site. Originally listed for $3.25 million, the 19th century properties (or perhaps more importantly, the land) ending up selling for a reported $4.5 million.

As is typically the case when such changes of ownership occur, people in the community became concerned about what might happen to the roughly 100-year-old structures. They alerted Wong-Tam, who then submitted a request to city staff to have the site reviewed for heritage designation. That request was sent in on November 2.

On December 1, the city received an application for a demolition permit, and on December 14, the permit was approved. It was just yesterday when Wong-Tam was informed that demolition was underway, but by then, it seems, it was too late. 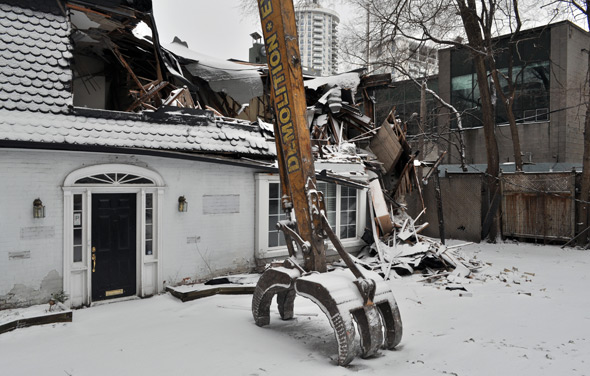 "Last night I found out that the face of the building was scarred, and all I can tell you is that it has been a very emotional 24 hours," she says. "This came out of the blue, and smacked the community on the side of the head."

It seems that Wong-Tam's request for a heritage review didn't impede the process of the new developers acquiring a demolition permit. In fact, it's unlikely that the request was shared from one desk to another, or even that it moved very much in its own queue.

"Heritage preservation is woefully underfunded," she says. "The dignity of heritage means absolutely nothing until the city starts to change some of its policies."

Much of that change needs to come from better interaction between departments, Wong-Tam says. 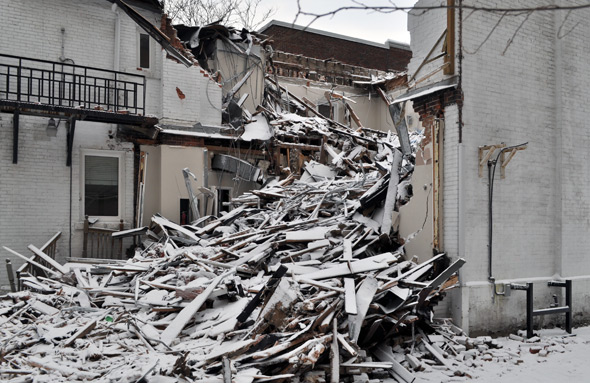 "There is an enormous gap in the coordination and communication between Toronto building and Toronto heritage preservation services. And it boggles my mind that demolition would take place without consulting the local councillor."

According to Wong-Tam, the councillor is typically consulted when it comes to residentially zoned properties, but not commercial. She says she plans to go to the highest level of city bureaucracy to work out a system to prevent these sorts of things from happening.

"This has been just devastating," she says. "It was in the hands of Toronto, and it fell through the cracks."

While residents fear the erection of a mega condo in 81 Wellesley's stead, as of yet, no planning applications have been submitted to the City of Toronto.