In case there was any doubt that bike lanes work to separate cyclists and drivers, this little DIY project from last week should offer some pretty straightforward visual evidence. Sure it's not particularly scientific, but given the location where the experiment was set up â the site where cyclist Jenna Morrison was killed â it's a stark reminder of how effective some painted lines (or a bits of garbage) can be in keeping everyone safe.

The work of cycling advocates James Schwartz and Dave Meslin, the project arose from their desire to determine if there was enough room to accomodate a bike lane at Dundas and Sterling. But it was also a bit more than that. "We also wanted to see how traffic would behave with a bike lane," Meslin explains on his blog. "So we picked up pieces of trash that were lying around and created our own bike lane (also taking advantage of the bike symbols that have been painted by community members since Jenna's death)." 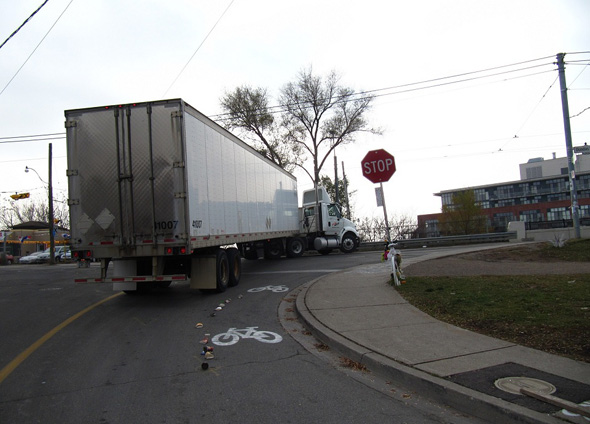 According to Meslin, the two had a number of questions going into their experiment, all of which were answered. "Would cars and trucks respect the lines? Is there enough room for a large truck to make a wide turn without impeding on the bike lane? Can all vehicles - bikes, cars and trucks - share this intersection safely with proper markings? Sadly, the answer is yes - on all counts. Too late for Jenna. But not too late for this to be a wake-up call."

For more on the experiment, check out The Urban Country and Mez Dispenser.