The Fort York Pedestrian and Cycle Bridge has new life

Axed by the public works committee back in April on account of what was deemed its exorbitant cost, it appears the Fort York Pedestrian and Cycle bridge may still have a heartbeat. Councillor Mike Layton revealed last night that a number of less expensive options for the bridge have been put together, which will be considered by the same committee who terminated work on the first bridge earlier this year. Even more pleasantly surprising is that according to Layton each of these options "have similar design elements to the award winning design previously considered for the bridge."

The key element in question would be the helix-like arch structure of the original, which is retained in each of the alternatives on the table. Apparently the cost savings â the new proposals are estimated to cost between roughly $18-20 million rather than initial $26 million â derive from the use of less expensive base supports for the structure. 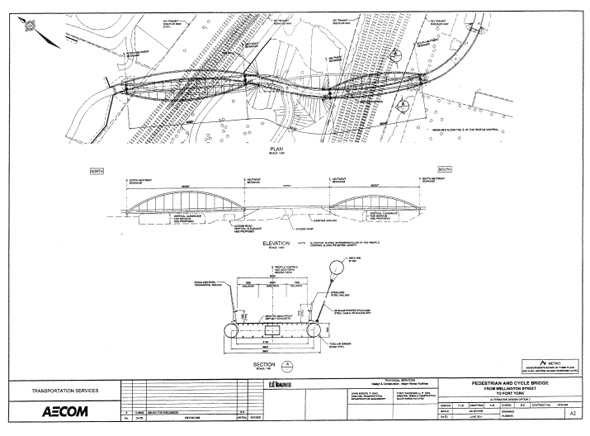 It's probably prudent to show only cautious optimism at this point, but to hear Denzil Minnan-Wong tell it, the bridge once again sounds like a done deal. "Capital projects always seem to come in with increases and that's a practice we'd like to stop," he told the National Post. "It was our feeling that we had to take a second look, and we've obviously come up with an arrangement where the city and taxpayers will get their bridge, but won't have to pay for excesses and overages."