Police move in on Occupy Toronto

Around 5:30 a.m. police descended upon St. James Park in what has so far been a peaceful and slow "raid" on Occupy Toronto. The remaining tents have been numbered and photographed, but no one has been physically removed as of 7:30 a.m.

Police are outfitted in regular uniforms (and rain gear), and they appear to be outnumbered by the media. There are reports that "prisoner transport vans" have been brought to the area, but they've yet to be put into use. Protesters have locked arms around the library yurt, which may ultimately be where a confrontation occurs if they refuse to leave. No word on that yet, though.

Here's the livestream from Occupy Toronto, though Citytv is also broadcasting the action.

A wave of union members has arrived at the park. Some reports have their number at 400-500 people. Police have re-entered the park, and tension is as high as it's been since the police first entered the park.

There are multiple reports that there has been one arrest., though there has been no conformation that the person has actually been place under arrest. She has, however, been removed and place in a police vehicle.

The scene at the Gazebo. 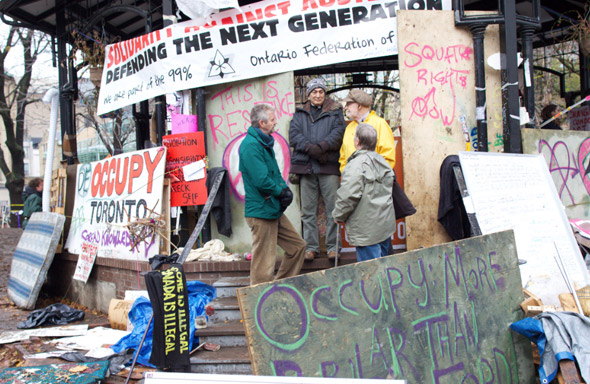 Here's the scene at the library yurt, where we think four protesters are barricaded. 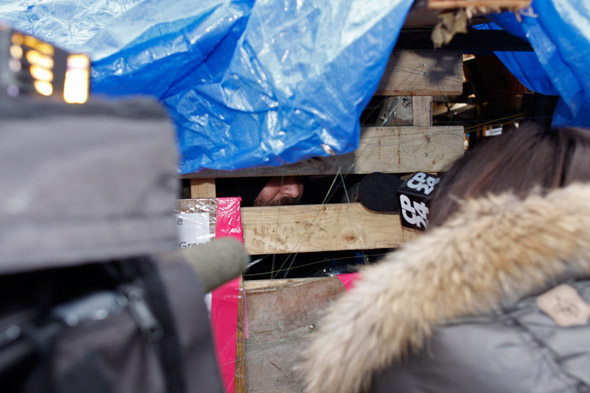 Not much new here, but this is the City's statement on today's events.

"At approximately 6:30 this morning, City staff entered St. James Park, supported by the Toronto Police Service to remove all tents and structures and to post notices asking protesters to refrain from gathering in the park from 12:01 am to 5:30 a.m. The City's goal today is to remove tents and structures and make the park safe for the enjoyment of all residents. Our intent is to facilitate this peacefully.

Shelter, Support and Housing Administration staff will continue to be available at the Adelaide Women's Resource Centre to assist anyone who may need assistance with shelter, housing or other supports."

9:00am comes and goes without a clash with protesters. Police showing restraint as majority of protesters are cooperating with dismantling effort. There is still the matter of the library yurt, though. It's still occupied by protesters.

As suspected, police have announced that protesters can remain in park after tents and other structures have been dismantled and removed from the park (as per the terms of the of the original eviction).

Protesters have been given until 9:00 to clear out from the library yurt, where two occupiers remained chained inside. If there's going to be a more forceful confrontation, it'll likely be here.

The park is still relatively calm as the eviction continues, with city workers and police removing debris from the park as some of the protesters empty the contents of the yurts. One thing that's making all of this rather unpleasant is the muddy mess that is the park.

Protesters have been given an hour to dismantle their remaining yurts in an effort to save them from damage. OPSEU is reported to be sending people to help with the process, but protesters are now scrambling to remove their contents.