Occupy Toronto has been officially asked to leave St. James Park. Toronto by-law officers are currently issuing eviction notices to protesters, many of which are being attached to tents. Part of the notice reads "the purpose of this letter is to advise all those who are occupying St. James Park that the time has come to remove your tents, structures, equipment and personal belongings from the park." 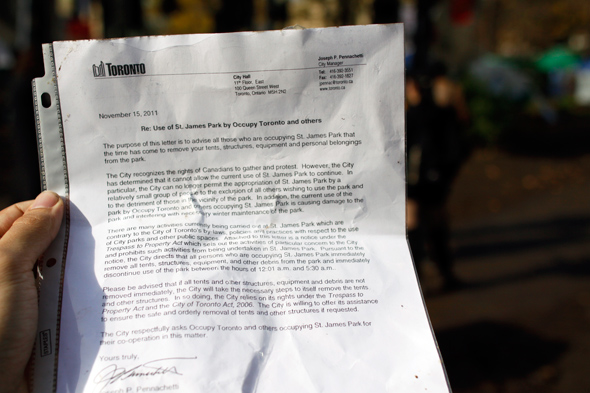 There are reports that the protesters are being asked to leave the park immediately, but the scene at the park is quite calm right now. Police are on hand, but Constable Wendy Drummond claims their presence is only to ensure that by-law officers can safely carry out the distribution of the notices. It's unclear who will be tasked with enforcing the eviction notices. 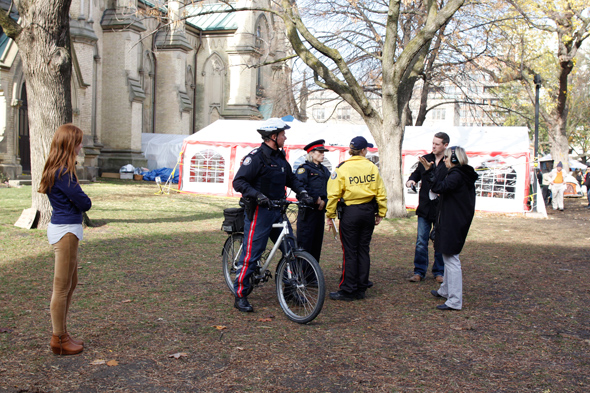 The official order to leave St. James Park comes just hours after police moved on Occupy Wall Street protesters in Zucatti Park. A court order obtained by the National Lawyers Guild may allow those occupiers to return to their site of protest, but what action the local movement will take remains unclear at this time. Some protesters have referred to an eviction strategy, but what exactly this entails has not been revealed.

Although there is another General Assembly set for 6 p.m., two members of the Occupy Toronto movement read out a statement in which they confirmed that they will remain in the park despite the eviction notices. It's not yet clear if the statement is meant to represent the entire group, a faction of which left the park to march to City Hall.

The CBC is also reporting that a lawyer is currently trying to get an injunction against the removal of the protesters from the park. We expect to learn more about this in the next hour or so.

Here is a copy of the letter signed by 11 city councillors asking that Occupy Toronto not be interfered with until the subject can be address at city council. 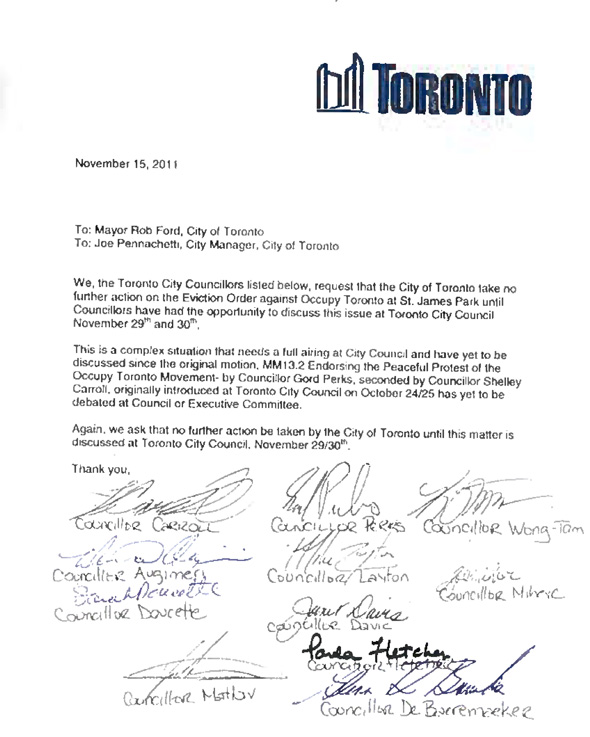 More photos of the scene at St. James Park 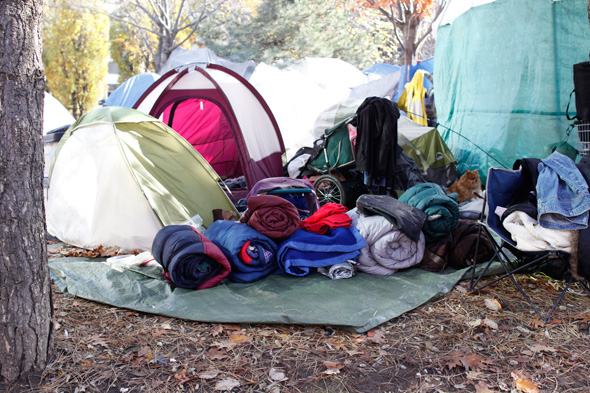 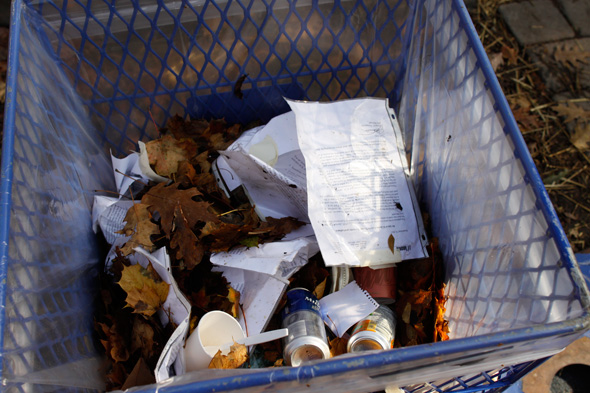 At a press conference at City Hall, one in which Rob Ford was curiously absent, Deputy Mayor Doug Holyday and Norm Kelly refused to give a concrete timeline on when police might react to a sustained occupation, but did note that as of 12:01 a.m. tonight, the eviction notices are "enforceable."

Union members at the park report that lawyers are currently in court seeking an injunction against the city's eviction notices.

Occupy Toronto is scheduled to have a General Assembly at noon, at which time we expect to know a little bit more about their response to the order to vacate the park.

And here's a the live video feed from Occupy Toronto should you want to monitor how this plays out over the course of the day.

Here are some excerpts from the the City of Toronto's statement about the eviction:

"This morning, City staff hand delivered a letter from City Manager Joe Pennachetti and a notice under the Trespass to Property Act to protesters at St. James Park, advising that they immediately leave the park...

The City has worked to balance people's right to protest with public safety. Residents and businesses have been very reasonable and patient. Protesters have been very peaceful and the City is very appreciative of this. However, it's time this came to a peaceful end.

The protesters have not approached the City nor has the City given permission to use St. James Park for the type of activity that has been ongoing there since October 15. Many activities at St. James Park are contrary to City bylaws, policies and practices with respect to the use of City parks and other public spaces.

Protesters are required to remove all tents and other structures, equipment and debris immediately.

The City is willing to assist to ensure the safe and orderly removal of these materials.

It is the City's intent to facilitate this peacefully."

Here is a copy of the eviction notice, which forbids the protesters from erecting tents or other structures and from entering the park between midnight and 5:30 a.m. 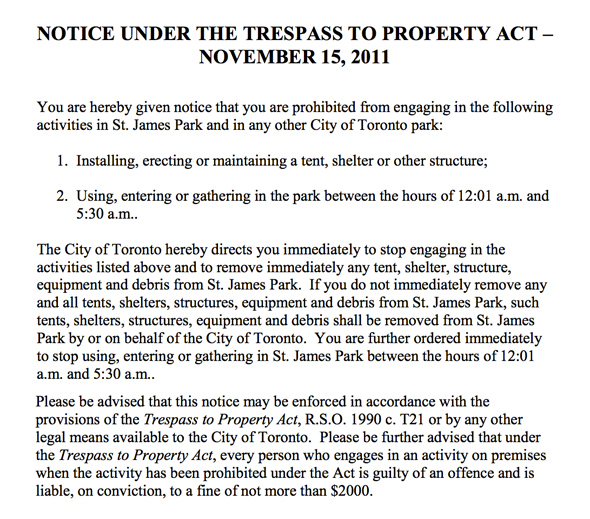