The location of culture in Toronto (maps)

A new report on the state of Toronto's cultural sector prepared by the Martin Prosperity Institute and a variety of other groups including OCAD U, E.R.A. Architects and Wavelength/Music Gallery will be considered by the City of Toronto's economic development committee this Friday (October 7th). Titled "From the Ground Up: Growing Toronto's Cultural Sector," a major component of the report involves the identification of cultural clusters within this city. "Growing Toronto's cultural sector begins with identifying cultural locations from the ground up," reads the preface. "Once identified, the impact of conditions, policies, and official plans can be evaluated to facilitate the growth of existing locations, establish new culturally fertile ground, and prevent losses to important cultural jobs and businesses."

So where is culture located in Toronto? The following are some of the key maps compiled for the report. For larger versions, check out the appendix of the report. 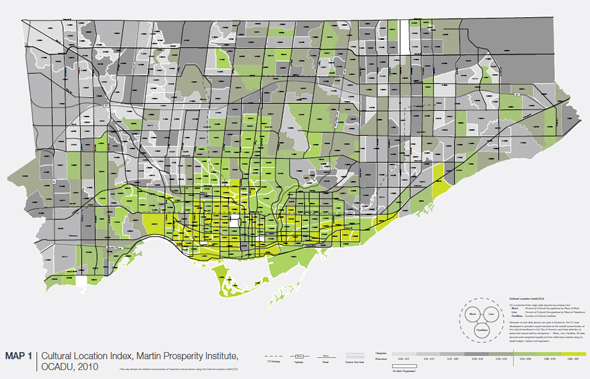 The Cultural Location aims "to produce a quantifiable, reproducible, city-wide view of the overall geographic concentration of the cultural economy" by focusing on three sources from census tract data: work (percent of cultural occupations by place of work), live (percent of cultural occupations by place of residence), and facilities (the number of cultural facilities in a given area. On the map above, the lightest grey areas rank lowest, while the lime green / yellow areas have the highest concentration of cultural activity. 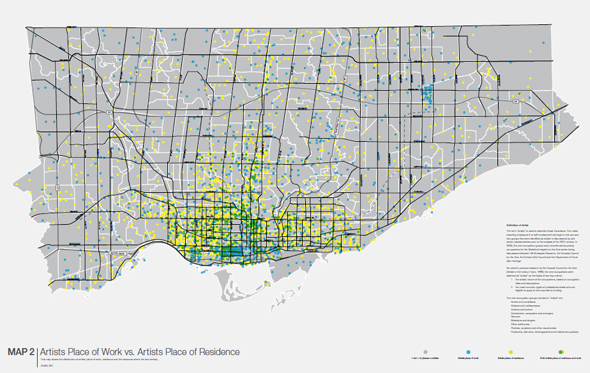 On this map blue dots represent where artists work, yellow is where they live, and green indicates instances in which a residence and workplace are one and the same. Each dot represents 12 artists in a given census tract. Although the cluster is obviously downtown, the sector is far more spread out than one might think.

3. Cultural Workers Top Places of Work and Places of Residence 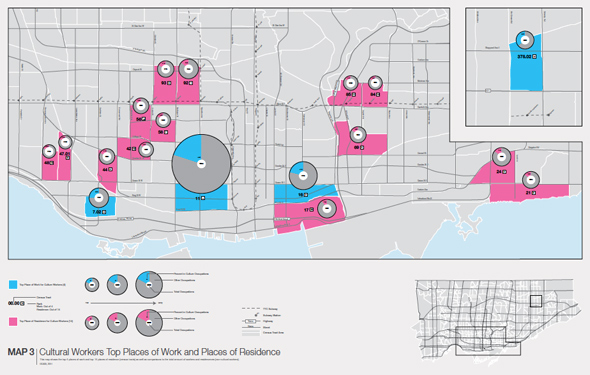 The most popular places to live are, on the other hand, quite predictable. Making up the top five are what the authors refer to as Parkdale Village, West Queen West, College Promenade, Little Italy, and the Annex.

5. Cultural Workers vs. All Occupations 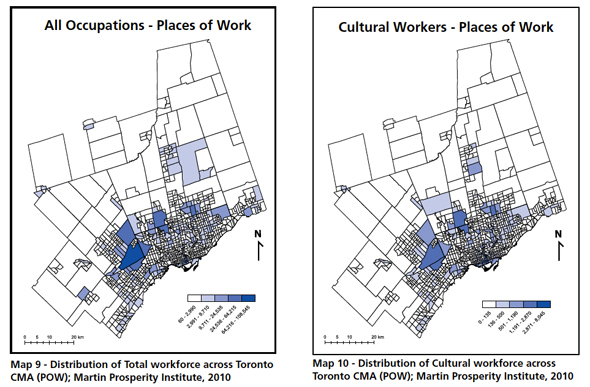 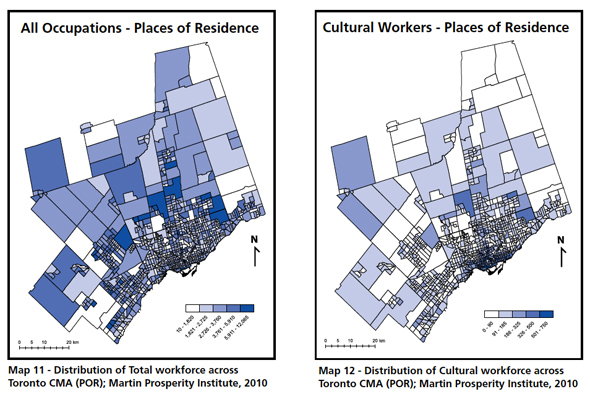 Although there are no immediate financial implications that would result from adopting this report," If the city were to get behind it in a meaningful way â something that's not likely with the current makeup of city council â the authors believe they've delivered something of a roadmap that can help planners to foster a healthy cultural sector by focusing in on those places where it thrives. Above all, what the report hopes to do is convince the City to use its findings "as a planning indicator to inform Official Plan reviews, secondary plans, and community improvement plans" that will help to foster the cultural sector's continued growth.

Lead photo by -stacey- in the blogTO Flickr pool