Last night a frustrated group of about a hundred residents of the Wellington and Niagara neighbourhoods met with city councillor Adam Vaughan and two representatives from development company Minto Freed to discuss the proposal of a massive high-rise condominium complex in the area. The proposed building, at the corner of Bathurst and Niagara, will reach 81 metres in height and add an estimated 1,000 new vehicles to an area already battling serious traffic problems. Residents are concerned about this influx in traffic as well as the impact the building will have on the neighbourhood's historic character.

If I had to pinpoint the exact moment that Minto Freed's proposal fell apart, I would have to choose the moment where an older gentleman, to gales of laughter and applause, stated bluntly "Just because it's made of bricks doesn't mean it's Victorian."

From that point on, the meeting got away from Minto Freed's representatives, who spent the duration of the two-and-a-half hour session awkwardly dodging questions from irate residents and an increasingly frustrated Vaughan. Had Minto Freed accounted for delivery truck traffic to and from the planned Whole Foods on ground level? No. Had they considered potential bus loading zones for schoolchildren in the building? No. Had they realized that several units on the first fifteen floors of the proposed building wouldn't actually receive any sunlight? Yes, apparently, but that was deemed inconsequential.

Not surprisingly, this did nothing to endear Minto Freed to the residents in attendance, who remained unanimously opposed. Tempers began to flare as the meeting dragged on past the scheduled 9 p.m. end time. By the time Minto Freed announced that construction on the building would take approximately six years, people actually began to heckle. City Planner Sarah Phipps diplomatically ended the proceedings by saying that further meetings would have to be held. 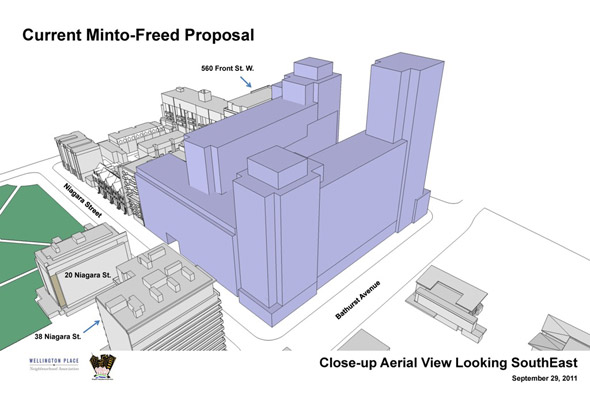 The future of the proposal remains uncertain. Vaughan is now on record as wanting Minto Freed to withdraw their rezoning application, but acknowledged the company's legal right to pursue the plan further. As for the residents, they remain concerned that if the plan is approved by city council, it will set a precedent for other monolithic developments in the neighbourhood.

Has Toronto's condo boom finally gone too far? As these massive developments creep further and further north of Front Street, what impact will they have on the historic neighbourhoods and their unique aesthetic characteristics? Why does "regeneration" increasingly seem to mean "gentrification?" Most importantly, what effect will a mass influx of upper-middle class, car owning condo dwellers have on these mixed-income areas? And why must attracting them come at the expense of the residents who have to live with the consequences?

More info on the opposition to this project can be found at Stop Minto Freed Development.