"In many respects Toronto is a wonderful city in which to live, but it cannot be called beautiful." That, in a nutshell, summarizes the sentiments expressed by architect Jack Diamond at last week's Walrus-organized debate that tackled the resolution that Toronto will never be beautiful. He was joined by long-time Globe and Mail writer John Barber (who also argued against Toronto's aesthetic merits), University of Toronto English professor and Walrus fiction editor Nick Mount, and author Stephen Marche (the latter two of whom were tasked with arguing against the resolution). In front of a crowd that could fairly be called Toronto's elite, the four debaters showed off their considerable wit in addressing a question that seems to fascinate Torontonians a little more than it should.

Despite the absence of an official winner at the end of the night, the sentiment above, which Diamond had occasion to repeat numerous times over the course of the debate, might have won the day if it wasn't for the temporal element of the resolution. While I suspect the vast majority of those in attendance (and in general) would agree that, relatively speaking, Toronto can't be called a beautiful city today (or in the past), as Marche pointed out early on, it's pretty much impossible to argue that this will continue to be the case indefinitely. While our concept of beauty remains fixed (a point which Mount made rather emphatically with a reference to Kantian aesthetics and the universal beauty of sunsets), the city is anything but static. Insofar as Toronto has become quite obviously more beautiful in the last decade â corresponding to what's been called its cultural renaissance â it'd be silly to close the door on it ever achieving the status of a beautiful city at some point down the road, even if we can't necessarily imagine the specifics of such a scenario right now. 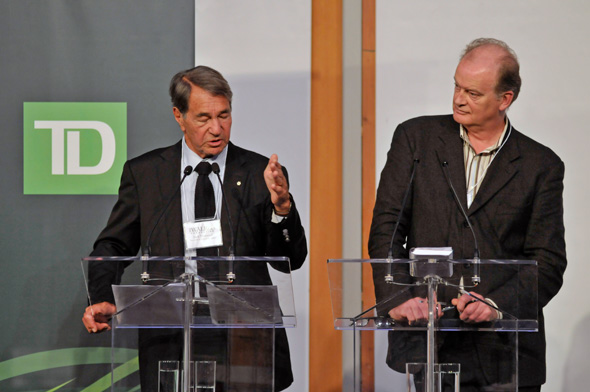 It's not hard to see why no winner was declared, is it? What made the event engaging, however, wasn't the participants' rhetorical prowess or the degree to which one side out-dueled the other so much as the various insights that were spawned by the discussion itself. Here are a few highlights.

Jack Diamond
First to speak, Diamond established his fourfold criteria for urban beauty, a list that somewhat amazingly, wasn't challenged at any point during the debate. Was it really that air-tight? After using Paris, Venice, and St. Petersburg as examples, he stipulated the following:

How does Toronto stack up when it comes to this criteria? For Diamond the city's chief characteristic, its low density sprawl, disqualifies it from the get-go. Worse still, we lack the constitutional self-determination required to remedy what ails us. "The city is a supplicant, begging for crumbs at the provincial and federal tables, where those governments dine scrumptiously off the proceeds of its urban vassals," he damningly explained.

Nick Mount
Although Barber and Diamond would accuse him of arguing for their side, Mount eloquently pointed out that Toronto, as a relatively young city, is the product of an aesthetic value system that places the monstrous and sublime over the beautiful (have a look at Mies van der Rohe's TD Centre for a sense of what he's getting at). Modern art turned its back on beauty, and cities followed suit. That's not, however, to say that this will always and inevitably be the case. One might argue (though I don't think I heard Mount explicitly do so), that we already occupy a paradigm (postmodernism) with a less monolithic value system). So again the issue of "never" complicates the determination to say, once and for all, that Toronto ain't got a shot at beauty. 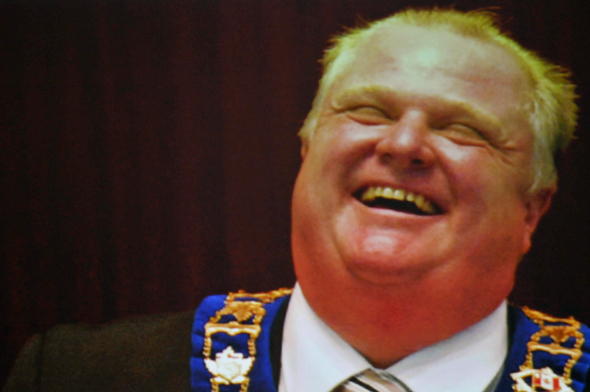 John Barber
In general, Barber's argument against the possibility that Toronto will ever be beautiful was the least convincing of the night, but he did offer a fascinating, if undeveloped, theory for why modern Western cities aren't as aesthetically pleasing as their older counterparts. The centrepiece of Barber's case was a slideshow that featured images of ugly Toronto, you know, strip malls, low density suburbia, semi-industrial areas. While this might seem like visually damning evidence, as Marche pointed out, the outskirts of most major cities have similar aesthetic qualities. Barber did, however, win over the crowd with the final image in his gallery, which depicted a deeply smiling Rob Ford. More stimulating was his theory that democracy has robbed the modern city of the beauty of built form. "Beautiful cities carry oppression within their DNA," he noted in explanation of the dichotomy between old and new urban centres. Although he didn't expand on the idea as much as I would have liked, presumably the logic is that the unity Diamond gestured to in his introductory remarks is disrupted by the plurality of design practices/theories fostered by democracy.

Stephen Marche
Marche's argument for the possibility that one day Toronto might be considered a beautiful city was essentially temporal in nature. Having moved here 10 years ago, he's witnessed Toronto become more and more beautiful. On top of that, the city has dispensed with its old colonial inferiority complex in favour of something more ambitious. Given that we're not short of money, talent and will, it's feasible that our current trajectory of improvement will keep up. Heading off the inevitable counter-argument before anyone could make it, he noted that even Rob and Doug Ford, despite their limited imagination, wanted to do something they thought was beautiful with their failed attempt to take over the redevelopment of the Port Lands.

That's the overview. The live-tweets from the event have been preserved with the hashtag #TOdebate on Twitter, which might be worth checking out if your interest in the subject has been piqued. The Walrus also plans to post full video of the debate in the coming days, so I'll add or link to that when it comes available. Based on the summary above, how would you weigh in on the debate?