A protest planned by Occupy Bay Street, a group that had hoped to "make a very large statement" on Monday morning was anti-climactic to say the least. The 20 or so protesters who gathered outside the Toronto Stock Exchange prior to its opening did a little chanting and sign-waving before eventually heading back to St. James Park. But if they felt defeated, it didn't really look it, as their mood was generally upbeat throughout the "protest" and as they departed the Financial District. 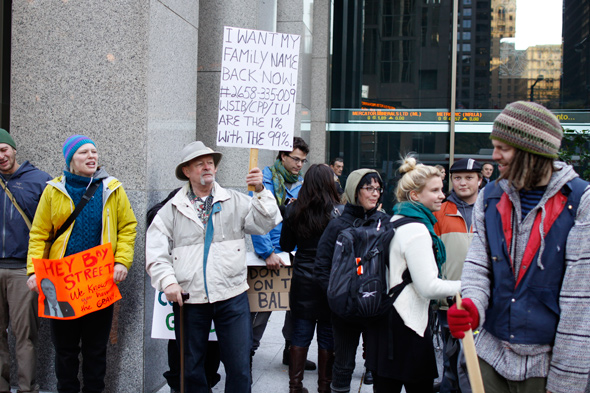 While there was a heightened police presence this morning, it paled in comparison to the media who were gathered in the area. The occupation at the park is a slow process, and not much has happened since the first day aside from prolonged attempts to organize the collective in the most democratic way possible. Today's action seemed to promise a shake-up, but ultimately lacked the visibility to accomplish much in the way of sustained attention. 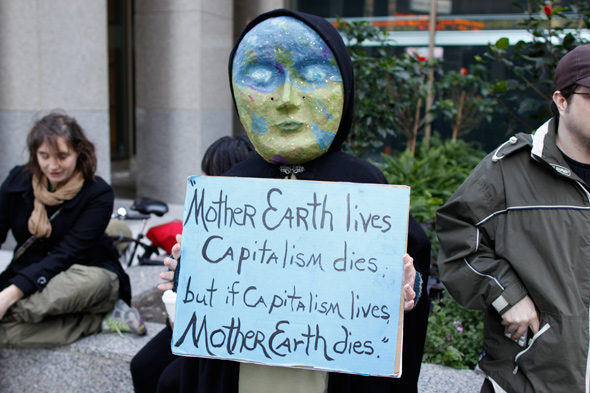 Part of the reason for the small number of protesters is that the more aggressive stance adopted by Occupy Bay Street did not go through the General Assembly at St. James Park, and was thus deemed an "action independent of the collective." It won't, however, be the last out-of-park demonstration that takes place as part of Occupy Toronto. Later this afternoon a march has been planned to Ryerson University, where the occupiers with join a rally at Gould and Victoria streets in connection with Social Justice Week.

More to come then.