It's been a long time coming, but it appears that the City of Toronto is finally getting around to painting sharrows on Spadina. Last October, some will recall, the City eliminated the curb lane that previously ran between Bloor and Lake Shore Boulevard. This wasn't an official bit of cycling infrastructure, but it certainly gave one a little bit of space and comfort when riding along what is a rather busy thoroughfare. At the time, the City explained that the removal was part of a plan to introduce sharrows on narrower stretches of the street and bike lanes where the road was wide enough â i.e. around Spadina Crescent.

Although no firm date was given for the implementation of the new infrastructure, a post about the situation from the Toronto Cyclists Union indicated that City staff had assured the organization that the sharrows would be in place before the end of season. Good thing they didn't specify which season, because work has only just gotten started about 10 months later. 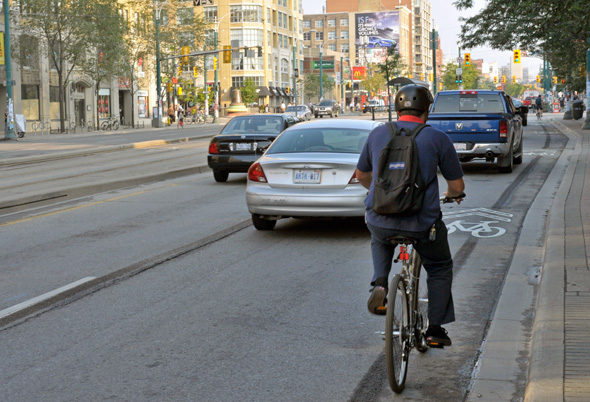 So far the new sharrows can be found on the east side of Spadina between Adelaide and just south of Queen. We're working on getting a timeline on when the rest of the street will be graced by their presence, but perhaps the bigger question is whether or not the sharrows and short bike lane will represent an improvement. While narrow, the curb lane functioned to divide cyclists and vehicular traffic. Sharrows, on the other hand, aim to foster awareness that cyclists and drivers share the same road-space.

It's probably not possible to answer the question until more people get out and try them out, but I would imagine at least a few will be asking, "if it ain't broke, why fix it?" 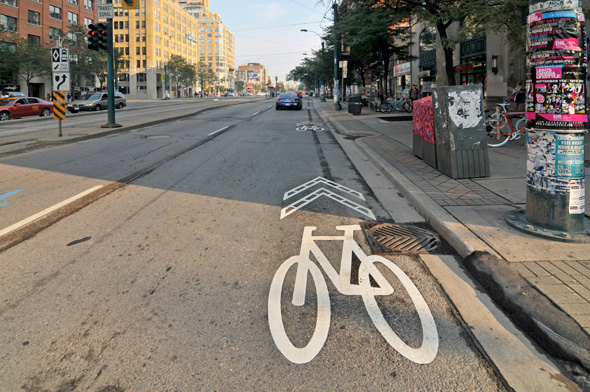