Exploring the end of Modernism (a photo essay)

Many advocates of postmodernism will tell you that architecturally, the former modernist mode came to an end with the demolition of the infamous Pruitt-Igoe projects of Missouri in the early 1970s. Sadly, I was born several decades too late to experience this and bring back images.

I can, however, share some snaps from a somewhat similar site demolition in Toronto. The property in question most definitely falls under the category of modernist design, and in its last breaths, reveals quite a unique aesthetic — one very different from those familiar with my usual work.

I think it's important to briefly examine the concept of an end or ending. Art critic Arthur Danto speaks of a certain transitioning from the purely aesthetic to a dialectic in his theses on the end of art. His important contribution here is the idea that merely because a movement has come to an end or come to a complete fruition of intention, it does not mean that the form will not continue to be re-created.

In this vein, over the past few years I have documented the desertion and demolition of several key Toronto modernist landmarks (think Regal Constellation Hotel, Tweedsmuir apartments, etc.), all of which led to a personal re-examination of the beauty in decay. This example — a semi-anonymous eight-storey structure at Don Mills and Eglinton — may not rank with those in the architectural history of the city, but it's fascinating structure nevertheless.

The building in question was not, at first glance, terribly inviting. The front stairwell reeked of pragmatism. 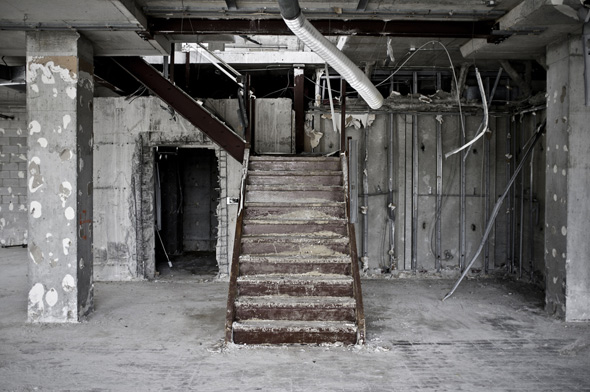 The starkness of shape, form, and colour (or lack thereof) was likely due to the current...err...'state' of the building though. 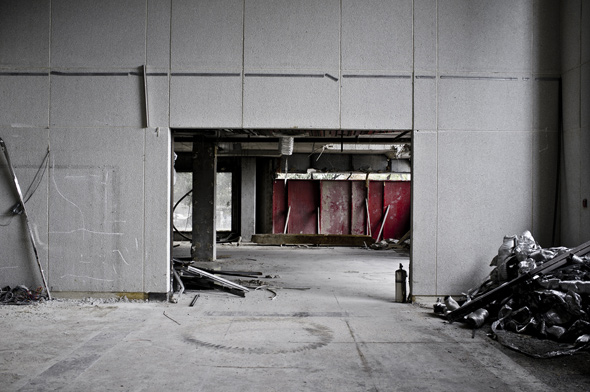 The process of dismantling was kinder to some area than to others... 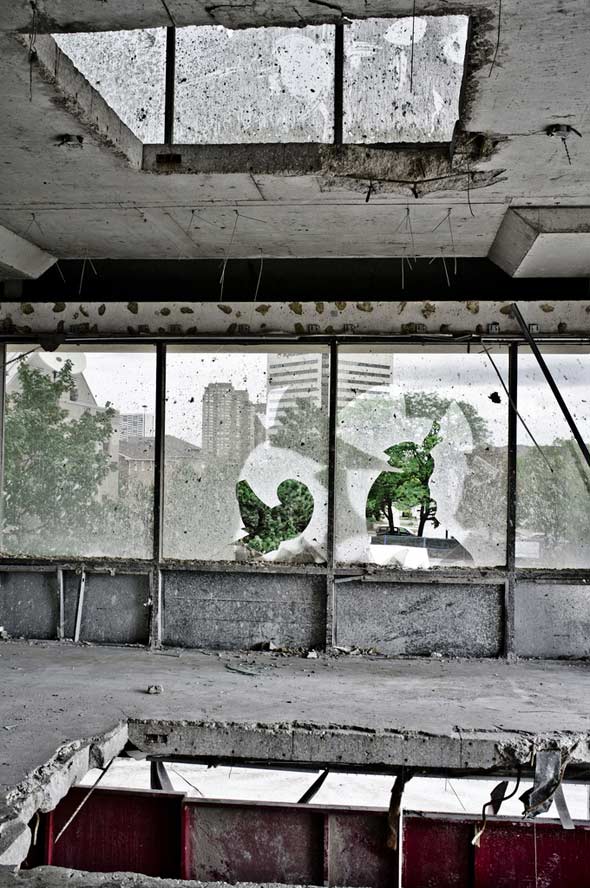 The acoustics were lovely though. I could picture 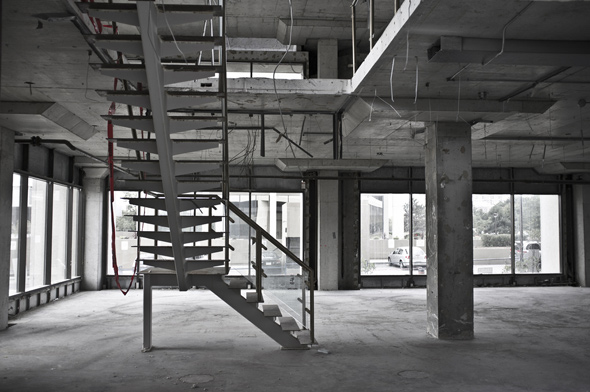 Brian Eno or Philip glass giving the old girl an awesome send-off. Too bad I didn't bring an iPod. 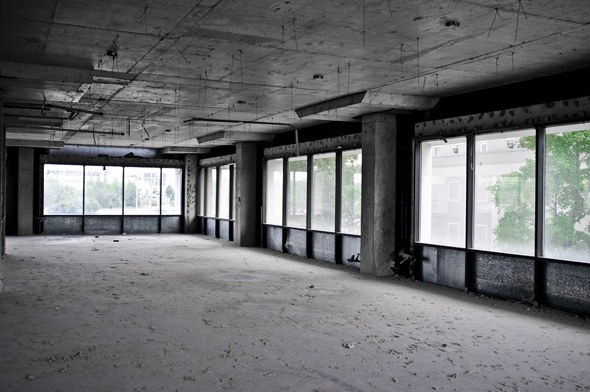 All eight floors were remarkably similar — a bit like the 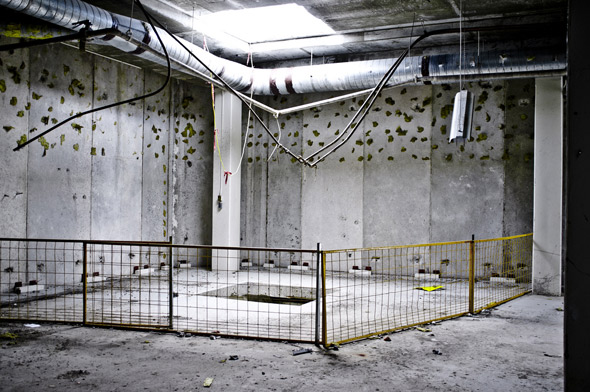 Box Factory in that episode of The Simpsons.

I felt the same sterility in design as one of the buildings' deceased neighbours down the street, the old 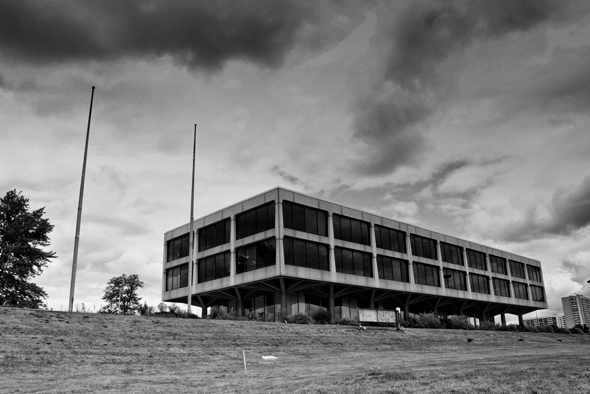 I am always partial to a good rooftop view, although this one was rather dismal, given the surrounding landscape. 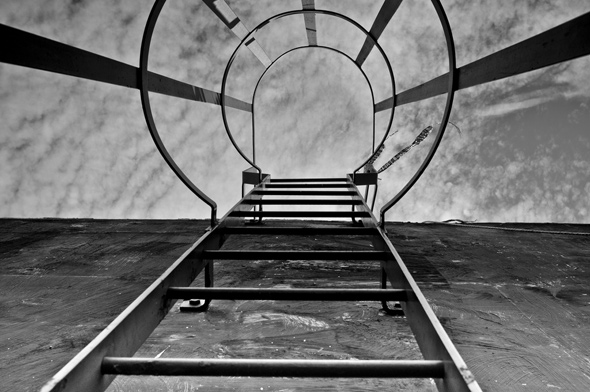 There was even a kind of "dis-connect." 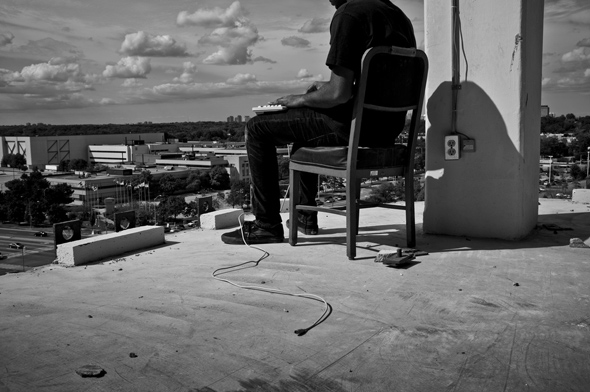 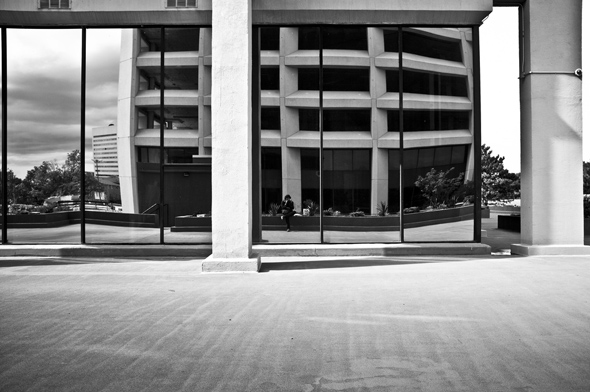 The grammars of creation (or re-creation in this sense) became starkly apparent to me as I explored this building. I felt no sadness that condos would soon rule this particular land. There existed still, a basic unsettled feeling beyond the literal un-settling of this place.

The space between desolation and redevelopment is, for this reason, something left largely unseen. I tend to make it my mission to occupy that gap, however, and will continue to explore the desertion of the familiar.

(To see the rest of the photo set, as well as high-res versions of those above, you can view my flickr slide-show below...)