When I arrived at David Pecaut Square yesterday for Jack Layton's funeral, there were already several hundred people scattered around the grass on blankets, in collapsible chairs and dotting the perimeter — with more slowing streaming in. It was 12:30 p.m. and the procession wasn't scheduled for another hour and a half, but already the place was getting busy.

It was an uncomfortable atmosphere for a funeral, or at least a non-traditional one. When people arrived they would hug one another tightly, desperately, but it seemed more an acknowledgment of the gravity of the day rather than of mourning.

In the week since Jack's death, much of the public grieving has been cautiously triumphant. Certainly we, the people, have lost someone important — that's evident in every chalk mark on every inch of Nathan Philips Square, but the gestures have been primarily in celebration of a life lived, rather than of inconsolable grief. 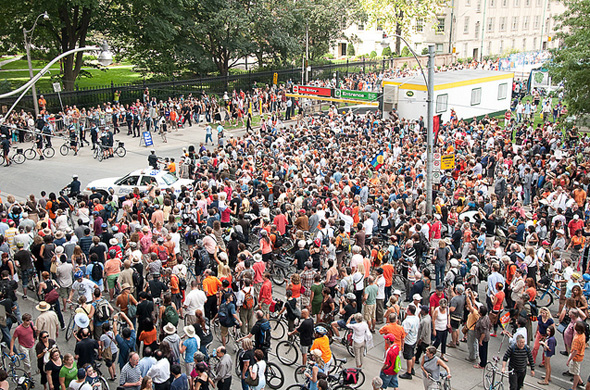 That's not to say the loss wasn't deep and personal — it was, or that it wasn't too soon — again, it was. But already, before Layton was laid to rest, his legacy has started to take shape, and he's become a symbol of something much bigger than party politics. The conversation of the past week has been about how to carry on his legacy, not how to crystallize it, a sentiment the afternoon's officiator, Rev. Brent Hawkes, returned to on more than one occasion.

These will be some tough shoes to fill. During his career, as Stephen Lewis so eloquently noted during his eulogy, Jack championed enumerable causes from gay and lesbian rights, to ending violence against women, HIV and AIDS funding, housing the homeless, an unwavering dedication to the environment and so many more. He had the commitment to social justice and changing the world many of us wish we had, and that was fine, because he was there to be the loudmouth that would champion those causes. 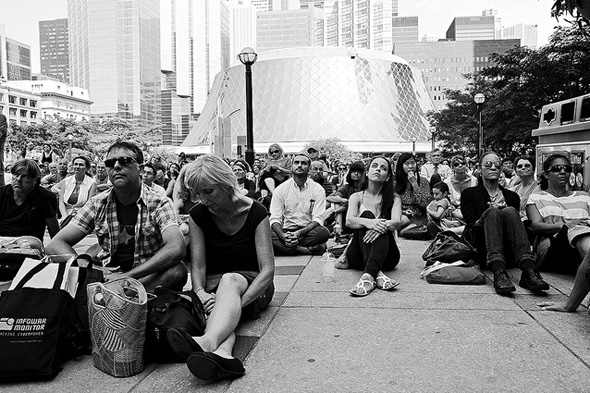 But he's not here anymore and I think that's something that has struck our collected consciousness a little harsher than expected. It was that unexpected realization that painted the concrete of Nathan Philips Square, and that same realization that did it again a day later when it rained and washed the chalk away. It was also that unexpected realization that brought upwards of 20,000 people to the streets around Roy Thomson Hall yesterday, not to cry — although there was a lot of that — but to stand up and be counted, to make sure that those shoes do get filled.

During his eulogy, Mike Layton quoted his father's words: "Always have a dream that is longer than a lifetime." This past week, Jack's has never been on greater display.

It's been said again and again that he was the same man in his private life as he was in his public one, that his politics were his personality and his heart had a direct line to his head. I never met the man, but I know him through his public life to be fiercely principled, political and absolutely dedicated to his causes — with the NDP being perhaps the one dearest to his heart. It's no surprise then that his funeral was equal parts send off to the man, cultural celebration and political rally.

The service began with an aboriginal blessing by First Nation's National Chief Shawn Atleo and followed by opening remarks by Rev. Hawkes, but the biggest applause came when Stephen Lewis spoke of Layton and his final letter. His eulogy — respectful, eloquent and as unabashedly political as Jack would have liked — characterized the letter as "a manifesto for social democracy," a statement that instigated a near instantaneous standing ovation both inside the Hall and out with cheers so loud that the microphones started crackling. Even the Prime Minister took part, a sight I'm sure was a once in a lifetime occurrence. 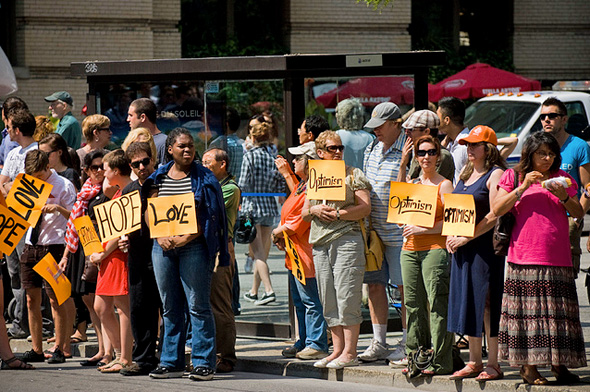 Everyone laughed when Karl BÃ©langer, Layton's senior press secretary, acknowledged there was no way we was going to be able to follow Lewis's call to arms, unfortunately for me, Belanger's speech was primarily in French and I'm shamefully uni-lingual, so I don't know how well he fared.

Jack's children, Mike Layton and Sarah Campbell, followed. They spoke of a more human Jack Layton, one who took his kids sailing and made time for tea parties on the floor with his granddaughter. They spoke of a person as committed to fatherhood as he was to his causes and who loved his wife more than anything. They reminded of the real loss here — not just of a leader, or an idea or a symbol, but of a man, a father and a husband.

There were musical interludes too, from Steven Page in a gut wrenching performance of Hallelujah (not easy to do considering the song's pedigree) to a boisterous rendition of "Rise Up" by Lorraine Segato, channeling the gospel and bringing worship back to the ceremony. Finally, the Reverend finished with this: "May you, and may we, rise to the occasion, because the torch is now passed, and the job of making the world a better place is up to us."

Tomorrow is a new day.

Photos (in order) by the author, Mauricio Calero, Ryan Kelpin and The Black Rabbit of InlÃ©.