Earlier today, Councillor Kristyn Wong-Tam unveiled the results and recommendations of a privately funded study that seeks to revitalize the stretch of Yonge Street between Dundas and Gerrard streets. Conducted by Ken Greenberg of Greenberg Consultants and Marianne McKenna of KPMB Architects, the Yonge Street Planning Framework calls for a number of major changes to the historic strip, the most controversial of which is sure to be the reduction of two lanes of traffic for wider sidewalks and additional pedestrian-focused space.

The plan is all part of a vision that Wong-Tam and local stakeholders have to create "a cohesive and clear identity for Yonge Street." According the study's authors, given the that the City's last traffic count in the area revealed that almost double the number of pedestrians (53,000+) pass through Yonge and Dundas per day than vehicles (22,000+), it's crucial to make the strip more friendly to those on foot from both a usability and an economic standpoint. 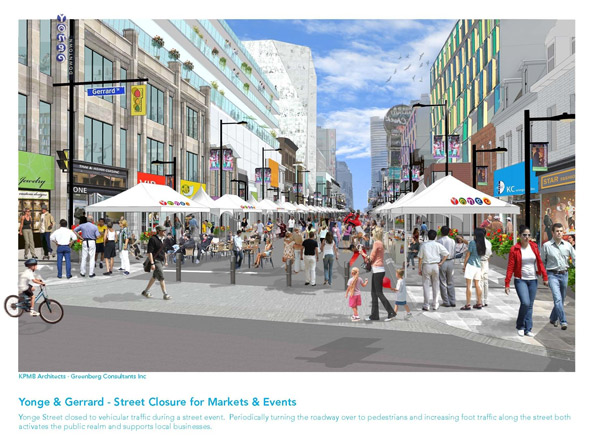 Along with lane reductions, the study calls for the addition of street vendors, street patios, and complete closure to vehicular traffic during special events. The more people comfortably occupying the street, so the argument goes, the better it is for the small to medium size businesses that rely on walk-up traffic. The original idea had been to pilot a pedestrian mall (as was done in the early 1970s) during the summer months, but "during community consultations, there was a lot more support for widening the sidewalks," Wong-Tam said of the new plan.

Other cities have adopted similar, pedestrian-focused strategies in key areas, the most notable of which is likely New York's creation of a pedestrian zone on Broadway around Times Square. Started as an eight month pilot project, it was eventually made permanent after the trial run.

With the loss of the former Empress Hotel still a scar on the neighbourhood, the framework also recommends that steps to be taken ensure the long-term viability of heritage structures along Yonge Street. When asked what can be done to protect these buildings, Wong-Tam tells me that she'd like "to move a motion that asks staff to write a full designation report for every building listed on the heritage inventory in the area." If they qualify, these properties would be given full designation, and thus some protection from encroaching development.

A number of steep challenges face those who'd like to see the Yonge Street Planning Framework implemented. Convincing Rob Ford â part of whose mayoral campaign platform was to end "the war on the car" â to get on board with lane reductions won't be easy. Despite this, Wong-Tam remains stubbornly hopeful that the reputation of the planners and the support of local businesses will help to convince council of the good that could come of this framework. "The only reason it would not go forward is if we have people that are risk averse," she argues.