The "abandoned" bikes of Toronto

It all started innocently enough. Coming down the street one day I noticed a friendly looking little yellow tag on my bicycle, which was parked in its usual spot on an old pole in my neighbourhood. Things took an unwelcome turn, however, when I had a closer look and noticed the following warning: "please remove your bike within 7 days or City forces will remove it."

What could this mean? 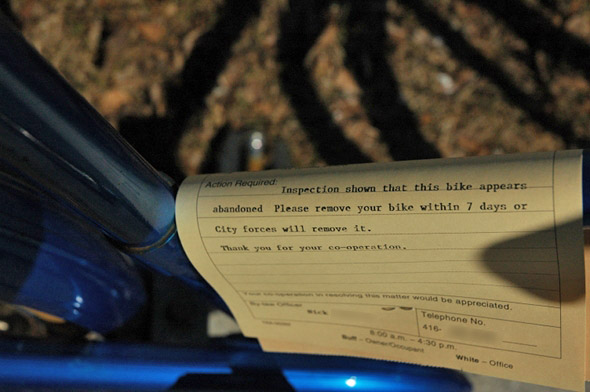 I took the "friendly looking yellow tag" inside to study it further. What? "Inspection shows that this bike appears abandoned." Excuse me? I had parked it in that spot just a few hours ago. My bike isn't scrap metal! 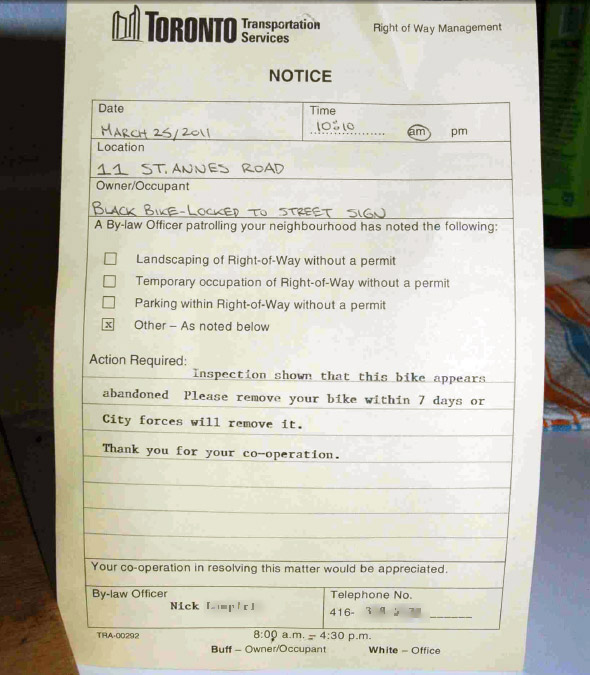 I was not happy. Not only did I get a ticket telling me to remove my bike from my favourite parking spot, but on top of that "Nick the bylaw officer," had the cheek to call my bike abandoned — like I was some irresponsible cyclist, letting my bike fall all to pieces like a big-eyed puppy at the SPCA (Society for the Prevention of Cruelty to Animals).

After the initial rage and shame had passed, I got to wondering: what other bikes in Toronto had received these little yellow tickets? And were they in the same kind of "abandoned" shape as mine, which incidentally is a very beautiful, if slightly modest, ride complete with two wheels and even a basket? 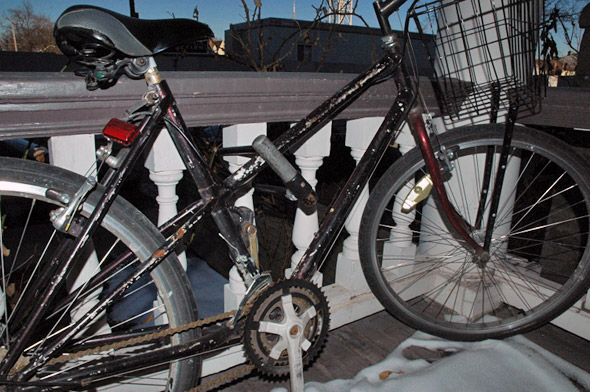 So I went for a walk, just to see what this Nick chap had or hadn't gotten up to. Here's a brief survey of my findings. 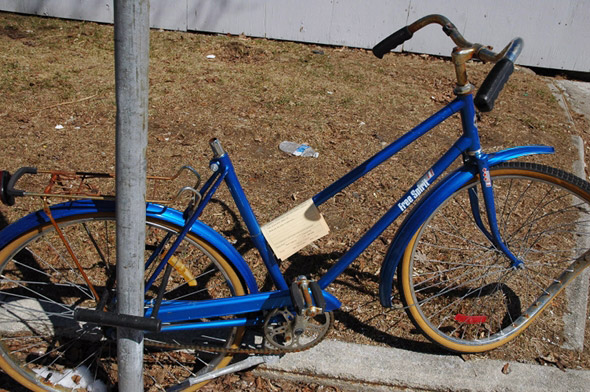 Okay so this one makes sense — look at that wheel! And the seat would for sure be painful. Totally, totally abandoned. And a little yellow ticket to prove it. Although, hmmmm, wait a second — if this "bike" got a ticket and my bike got a ticket...this means Nick is saying my bike is just like this bike.

The rage returned. What other judgment calls is Nick making? In what other ways is he destroying lives? I kept walking and came across this next specimen. 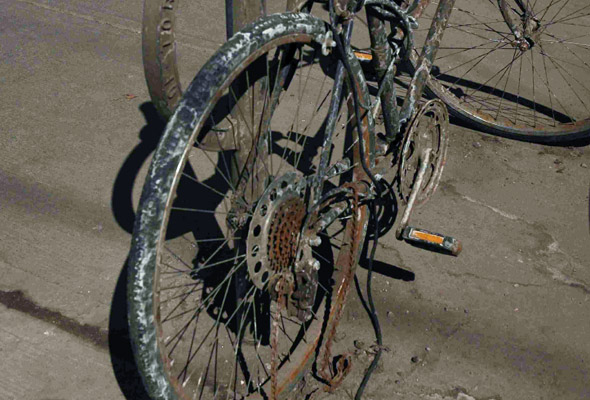 Clearly a working model. You know what the best part is? No yellow ticket. So I kept walking. Angrily. 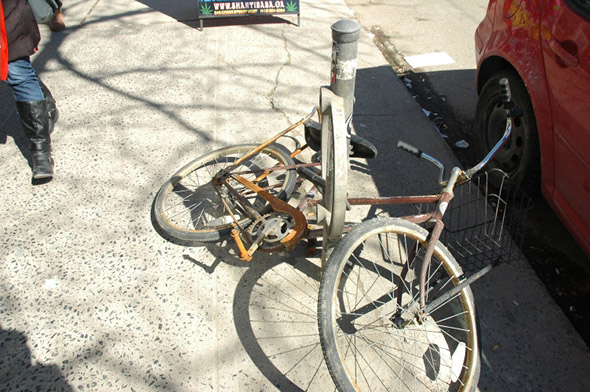 No pedals. No Ticket. Grrrrrrrrrr. Onward I went... 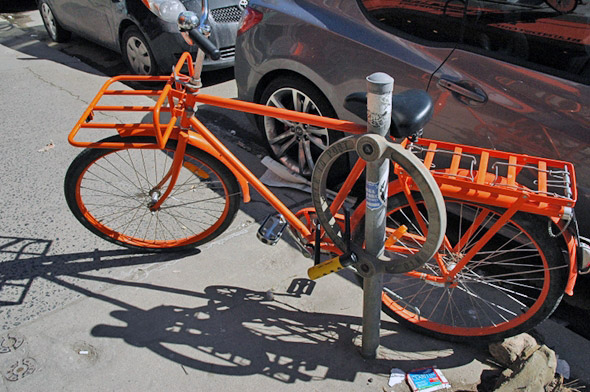 Again, no ticket. If not for abandonment, at least it should have gotten one for hideousness.

The next one was like some random nest of bikes arguing. No tickets, of course. 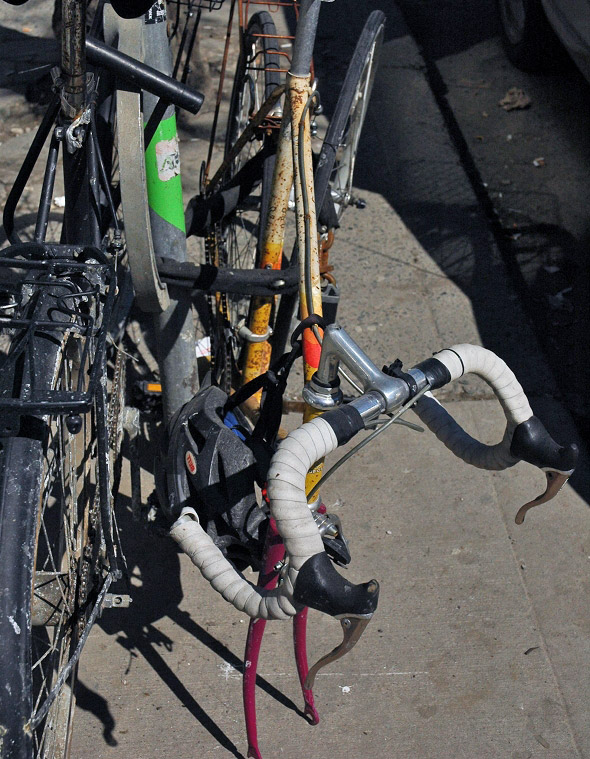 This one I wasn't quite sure about, but I felt like it needed some kind of ticket too. 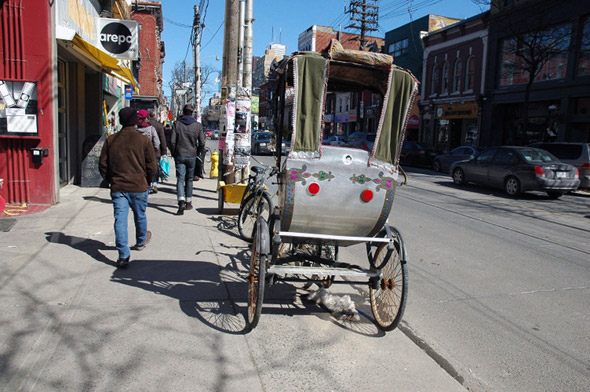 This next bike was so old it had clearly melted away. Again, no ticket. 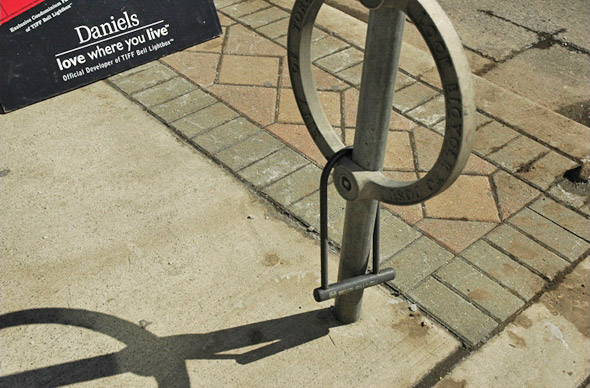 I think the most insulting one, however, had to be this next specimen. 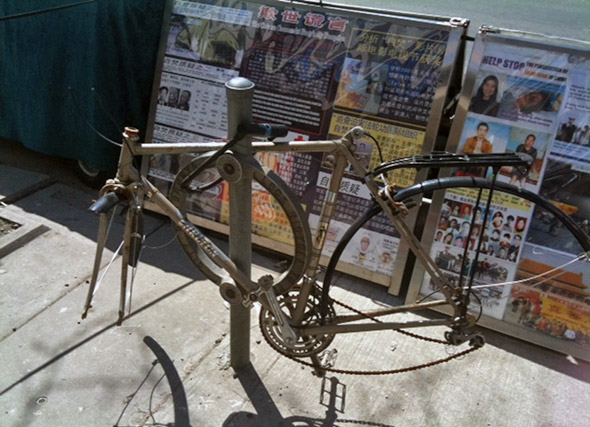 Do you see a ticket? NO!

So here we have a situation where a perfectly working if slightly scruffy bike, one that had been parked just hours before, kept at least one car off busy streets, and had a lovely basket to boot, had been brought to task by "Nick" for being abandoned. Now I know that Nick can't be everywhere, and judging how abandoned a bike looks is subjective business, but after this brief tour, one might conclude that his time would be better spent ticketing those bikes that have been truly defeated by the elements.

In closing, I'd like to come back to my bike's presence at its usual parking spot on an old pole. I enclose picture of said pole below, as I'm contemplating issuing the City a ticket for an abandoned pole if there's no bike using it in seven days. 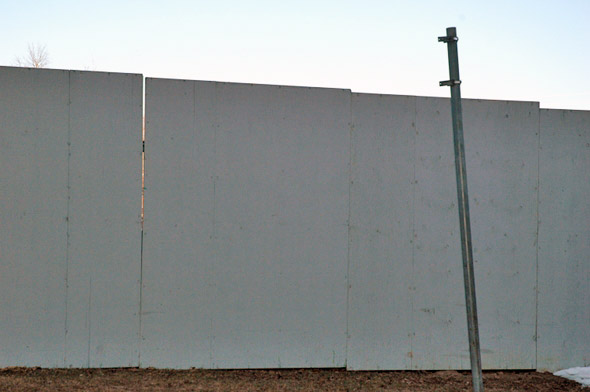 For another take on the abandoned bike issue, check out this previous post.

Writing by Melissa Felder. Lead photo by PJMixer, all subsequent photos by the author.