Last Sunday, the TTC implemented bus service reductions on 41 routes across the city. Shortly after, we began to hear a few grumbles about the way in which the changes were marked at individual bus stops. Although some stops received reduction notices about the size of a standard piece of paper, most were updated with yellow stickers placed near the bottom of the stop marker.

Nobody likes a nitpicker, but despite their bright colour, these notices are neither prominent nor specific enough to be of much use. Unless you've read up on the reductions, you could be forgiven for not knowing exactly what constitutes "late evening" service. Is 9:30 p.m. late evening? Nope, the cut-off is at 10 p.m. Also annoying, if more understandable, was the fact that the stop-specific service schedules had yet to be replaced. In other words, if you missed or misinterpreted the yellow sticker after the cut-off time, you were waiting for Godot. 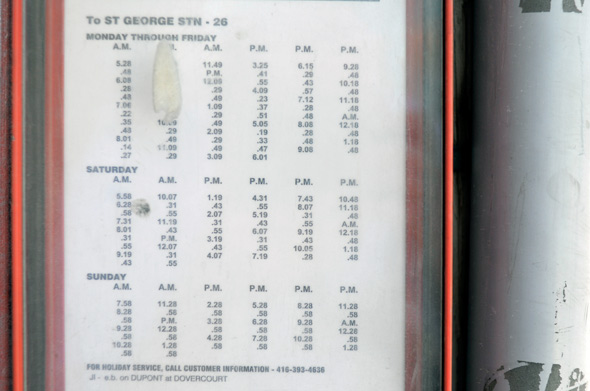 So we got in touch with the TTC to see what their plans were as far getting updated schedules out to the bus stops. It took a little while to get an answer, but when the news arrived it was mostly good. According to Danny Nicholson, a small crew from the TTC's Plant Maintenance Department have been working on the update for the last few days and expect to be finished in about a week. Because of other service changes announced at the same time (some of which aren't cuts), the crew has to install over 3000 cards on 64 bus routes.

It's understandable that this takes time, but all the more reason that a better service change notification should have been used in the first place. These are the little touches of customer service that would go a long way towards showing that the TTC really is committed to providing the so-called better way.

For the record, as of today, these are the routes that they've completed: